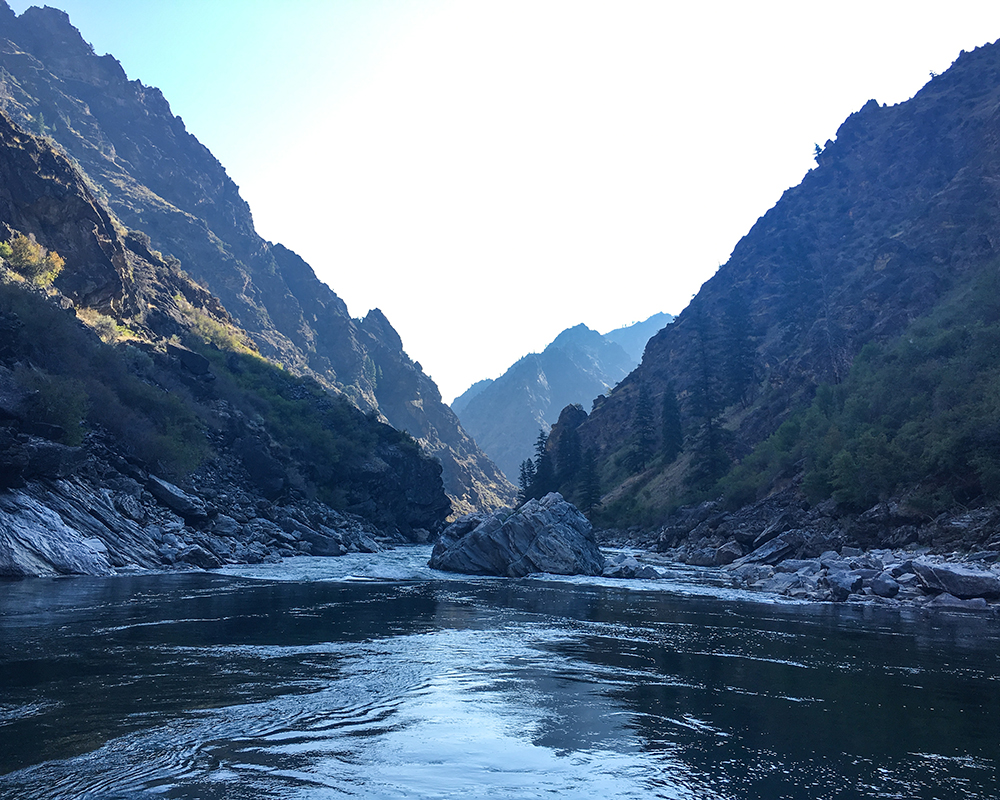 Few things cure what ails you better than a road trip. If you’re properly primed and able to go where fortune leads, you end up finding just the medicine you need. Last summer, I took a trip over miles and miles of black asphalt in my cherished old 4-Runner. While I (usually) knew where I was going, I didn’t know that a partner you could call “serendipity” sat in the passenger seat. She played the lead role in taking me in a direction that was completely unexpected — a voyage far from pavement, on a liquid highway that rocked my senses enough to flick on a light I thought had gone out.

I was awash in grief, brought on by betrayal. It’s an especially bitter and dirty sort of loss because only people you trust can occasion it. While I had been lucky to not have been betrayed before it was especially bewildering being so novel. My heart was hurting, I didn’t particularly like people, and I felt adrift in the dark. A dear friend, Bree, thought I needed a realignment. “Come visit me in Montana,” she entreated, to hang out during the twilight weeks of her first pregnancy and to visit a slice of America I had never seen. What little sense I had left sent me on my way, solo, armed with a solid music playlist, light camping and fishing gear, and a trusty old mountain bike for exploring the nooks and crannies of places I came across.

I traversed the Western states under the soul-bending wide-open sky, humming with thoughts and visiting people dear to me. Luck had me cross paths with a Montanan cowgirl twice, so I raced her horse on my bike and won (she let me). Lucky timing brought me to a dear friend’s creek-side wedding in Wyoming. Then fortune rang me up on my cell.

I picked up a call from Sage Sauerbrey, Moonshine’s intern-turned-star-reporter, who’d spent summers in this neck of the woods as a river rat. He was inviting me on a six-day rafting trip down the Middle Fork of the Salmon River, a place that held a siren’s magic over him. It was highly unusual that there was a spot open on the expedition, he said. I would work to pay my way. It sounded like manna from heaven, but the crew was leaving in two days and a newspaper deadline strummed my consciousness.

My meager road-tripping gear, clothes, and shoes would have to do as a river kit. I stashed into a cardboard box the remaining essentials: a bottle of whiskey and case of beer I’d bought from a shop clerk named, aptly for me, “River.”

Two days later, I was sleeping in my car on the roadside outside of Ketchum, Idaho, rousing slowly to an insistent alarm clock in the absolute silence just before dawn.

At 6 a.m. as the velvet indigo of a new day seeped across the sky, I made my way to the Far and Away Adventures headquarters, excited and uncertain. Bag slung over my shoulder, pillow tucked under my elbow, I hefted my box of liquor onto a shuttle bus that would take us to the river trip put in on the Salmon. A woman I later learned was the massage therapist hired for the trip, breathlessly asked me to tell her what to do. I think it was the sleepy eyes and rattling bottles that made me seem a regular.

The veteran river guides were wild, tanned, and full of laughter, something that was mirrored in Sage’s delight when greeting me at the loading dock.

Belying their effervescence, these guides are gritty. Working from dawn to past dusk, week after week, the crew navigates one of the nation’s premier whitewater rivers, in a remote area, all while shepherding a cadre of guests coming from all over with varying degrees of pluck. A variety of rafts and one extra special wooden boat carried the guests on sundry adventures — to hikes, fishing holes, and hot springs — as the sweep boats went ahead swiftly and set up camp.

This place pierces the everyday veil on life, tickling awake the wildness buried in our genes, and keeps it flickering long after you leave the riverbanks. It threads through three distinct ecological regions. The high alpine forests with swift channels of water give way to gentle hills and calmer rapids, then, just before emptying into the main stem of the Salmon River, this highway of sanguine liquid smashes through a deep gorge before passing through the Impassable Canyon, the third-deepest in North America.

Like most rivers, the Middle Fork changes with the seasons and years, but being undammed — something that’s unusual in the West — it’s temperamental. The rapids change almost daily, so the crew must know the river in all potential conditions.

As a “swamper,” I was a workhorse whose duties entailed loading and unloading a ton of gear every day. My base camp was a “sweep” cargo boat — one of two that carried the lion’s share of food and equipment for a party of 30. The sweep boats got lighter as provisions were consumed during the trip, but at the beginning, they weighed about 3,000 pounds.

Handling the gear boats is an extreme game of rub-your-head-pat-your-belly, and Sage, as the captain of our boat, was a master. Unlike on other oar-rigged boats, the oars on these were positioned at the bow and stern to turn the boat side-to-side, adjusting its slant through dramatic elevation drops and rapids. The oarsmen must safely deliver the entire group’s gear and sustenance through vigorous terrain that is accessible only by water or, in some places, helicopters. Sage’s handling of the boat was pure magickry.

The other sweep boat captain in our caravan was a marvel as well: Jessie was a warm-spirited woman with chops in everything from hardcore boating to crafting kombucha for the river to how to stop a bloody nose by punching the bottom of a foot. On this trip, she brought along her handsome and hulky dog Remy. Sage’s boat contained me and his sister Claire, who was, uncannily, also in a time of transition.

Conversation floated easily among the three of us on our boat. When Sage asked what Middle Fork animal I would be, I considered the mighty wolf, majestic mountain lion, or graceful bighorn sheep, but quickly answered, “A river otter.” I have always been a water-baby and the idea of deftly exploring these currents was tantalizing. “I knew that’d be your answer,” Sage said.

River guides generously share the river lore with guests, but Sage says one topic is often glossed over — the Middle Fork’s indigenous people — so he has delved into their history. Dubbed the Sheep-Eater Indians, or Tuka-Deka, these nimble folk did not use horses, which aren’t well-adapted to mountainous terrain, he told us; instead, they hunted on foot in small groups. They were expert tanners, and chose to avoid conflict by hiding in canyon crevices.

We spent a lot of time in contemplation drinking in the landscape as I imagine the Sheep-Eaters did; but the river always woke us up. Before each rapid, Sage focused mentally and physically, getting his blood moving, jumping up and down resolutely on his “dance floor” — the plywood propped between the boat’s two tubes. Nearing a particularly gnarly rapid, Pistol Creek, Sage told us, “Tuck your feet in and be ready in case we hit the rock wall on river left.” Since the water height and the river’s personality changes every day, “styling” through any rapid is a novel experience every time.

The rapid called Redside was a thorn. The previous year, an experienced sweep boat captain flipped a boat on a rock, and collecting the lost gear took days. As Redside neared, Sage concentrated so fiercely, he seemed to shiver. Tapping into raw power and intuition refined through years of practice, he threaded it, ending with a drawn-out holler that carried heartfelt thanks to the heavens.

Then we waited for Jessie’s boat. Entering the rapid, she swung askance and roared toward the dreaded rock. A tone of uncharacteristic fear rang off the rock walls as she called sternly to her dog, “Down, Remy.”

Sage rowed to the bank and had me jump off to anchor us so we could give whatever aid possible — my shaking legs made the landing. We watched as Jessie’s boat hung up on the toothy rock, then in short order, her swampers shimmied the boat loose, and they quickly sailed the rest of the rapid and pulled up next to us. Goofy from the adrenaline rush, we nipped whiskey to celebrate the avoided disaster.

I remembered a lesson from a book I read years ago: Only by experiencing the dark can you appreciate the light. At that moment, I realized the same is true for vulnerability. Only by being exposed to the veil between life and death will you feel truly alive.

Beholden to the schedule of setting up camp, the sweep boats rarely made sightseeing stops, but Sage made sure we fit in a few. One of my favorites was an immense wall with ochre/orange Sheep-Eater pictographs strategically placed, still present in a place that holds a sense of tangible history and sacredness. It’s a meaningful treat to be on a site in the lower 48 that feels profoundly tethered to the past. When you remember where you come from, and you welcome serendipity as your co-pilot, you move forward in the world more wisely.

As I had wrestled with the idea of taking this trip, weighing the intriguing invite, Bree gave me a piece of advice, “I think your soul needs filling up.”

The Middle Fork’s three distinctive ecological systems could be a mirror to the grieving process. The first stage throws you into swift channels, where you swirl and churn. The next stage gives you a little peace, with gentle rocking. In the final stage, you are truly scoured as you travel through a deep almost “impassable” place. But when you come out of it, you are relieved you made it, and exhilarated about life, sporting a big goofy grin and a full soul.

The Liquid Highway that Healed
Arts & Culture
12:00 am