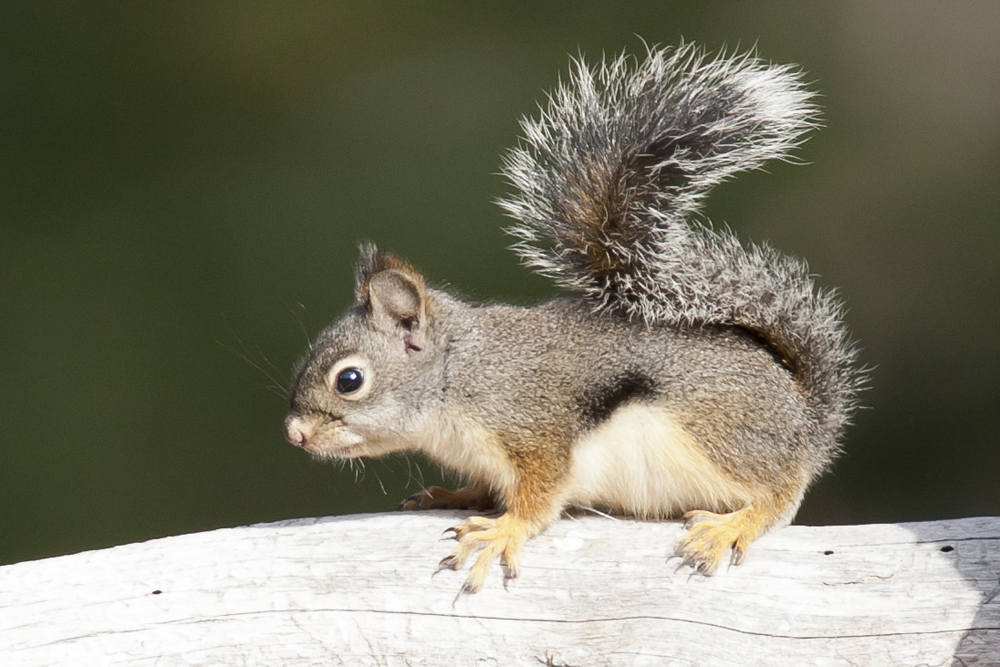 The Douglas squirrel (Tamiasciurus douglasii), aka the chickaree, aka the animal that “Peterson Field Guide Mammals of North America” calls “the noisy little squirrel of the evergreen forests of the West,” is one of the ubiquitous creatures in Tahoe. We see them every day scurrying around our homes and yards, constantly climbing up and down the pines and firs. The busy squirrel is distinguished by its noisy calls, high rapid notes of “chick, chick, chick, chick,” short and often-repeated “quer-o,” and twitch of its tail while it hastily climbs or chatters madly at territorial offenders.

Physically, the chickaree is most easily identified by the black line along its sides. Although the line fades in winter, it is easily spotted in the summer as it divides the upper, reddish-gray body from the pale yellow belly and the insides of the legs. Other physical characteristics are its black tail with silver edges and its seemingly bulging black eyes outlined in white. The other common squirrel in our area, the Western gray squirrel (Sciurus griseus), is larger by four to five inches than the chickaree, and its signature bushy tail is twice as big. The squirrel is all gray except for its white belly.
Chickarees dine on berries, mushrooms dried in the sun, flowers, and bird eggs, yet pinecone seeds are by far its favored food source. On the ground, the chickaree holds the pinecone in its hands, cuts off each scale one at a time, eats the seeds, and leaves the core behind. This small, un-intimidated creature will even approach the large sugar pine cone, which is the same length or bigger than its small body. Remnants of this feeding frenzy are easily seen by cone cores littering the forest floor or strewn across the tops of fallen trees. The cones that chickarees don’t immediately eat are stashed next to rocks or logs near their home trees in piles called middens, which can also include already eaten cones and scale leftovers. Since chickarees don’t hibernate, in winter their seeds stay preserved until ready to be eaten. Because eating and stashing pinecones spreads the seeds and therefore establishes tree seedlings, John Muir says of the chickaree, “Nature has made him master forester and committed most of her coniferous crops to his paws.”

One might find it surprising to learn that chickarees nest in old woodpecker holes. They line the holes with grass, twigs, and lichen in preparation for litters of approximately five babies in early summer. If no tree cavities are available, chickarees will build globular nests called dreys high in the trees between two branches.

In Muir’s book “The Mountains of California,” where he dedicates an entire chapter to the Douglas squirrel, who is named for Scottish explorer and botanist David Douglas, Muir bestows his own titles on the animal: “the wildest creature I ever saw” and “the squirrel of squirrels.” He even raises the Douglas squirrel to royal status: “Banish all the humming insects and the birds and quadrupeds, leaving only Sir Douglas, and the most solitary of our so-called solitudes would still thrive with ardent life.”

Have you been watching the squirrels vigorously collecting food, thinking it a sign of a big winter to come? Alas, that piece of local folklore is just an old wives’ tale, according to Kris Boatner, Truckee Ranger District wildlife biologist. With last year’s mild winter, it’s most likely the survival rate of the chickaree is higher, and therefore its procreation elevated. No wonder the squirrels seem particular abundant and busy this summer and fall.

One squirrel in particular got a little too busy. According to Liberty Utilities, it was a squirrel that caused the North Shore power outage last month that stretched from Homewood to Alpine Meadows. Apparently, the little guy climbed on top of the Tahoe City Substation transformer, causing an arc flash and short circuit, which resulted in a loss of power. We don’t know if it was “Sir Douglas” that caused all of the ruckus, but wouldn’t Muir have been surprised to learn that his favorite small critter knocked out an entire power grid!