Have you ever been walking through the woods when you suddenly stumbled upon a colossal rock sitting all alone, appearing random in placement? I’m talking a boulder the size of a Volkswagen Beetle; or, now that I’ve shown my age referencing the car du jour of 1972, can you imagine a large rock the size of a modern-day Subaru or Tesla — or bigger? Some such boulders are as big as a tiny house or an upended train car, which begs the questions: How on Earth did such mammoth rocks end up where they are? How did these seemingly out-of-place stones get here?

The answer? They hitched a ride.

It’s called ice-rafting, and the boulders are referred to as glacial erratics. More than 10,000 years ago during the last ice age, rocks floated on glacial ice as if they were riding piggyback downstream on a plate of ice. Sometimes they were even within or stuck to the base of the frozen slab. Ice floats; rocks do not. So, after a glacier melts, randomly dropped boulders can be found in locations far off from their points of origin. 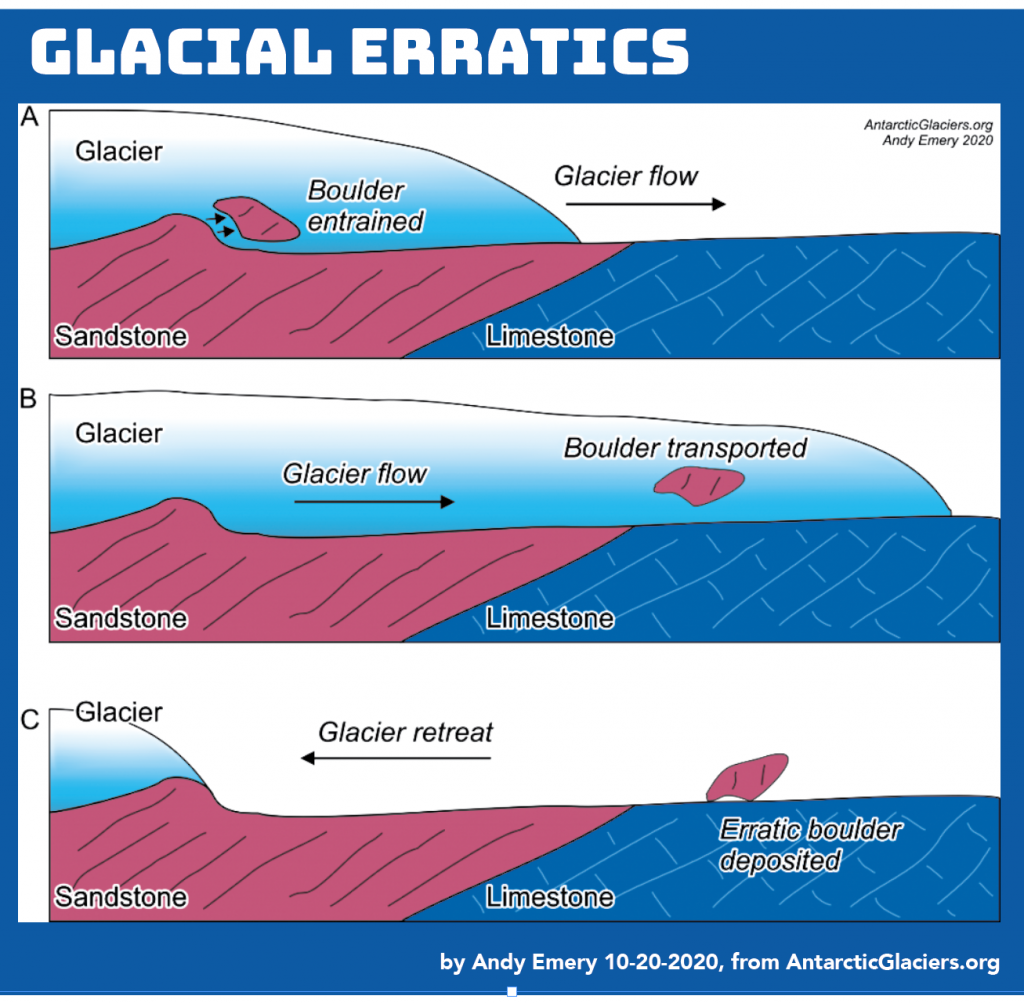 Climbers at Donner Memorial State Park nimbly ascend to the top of them, the boulders often four times the length of their bodies. Witnessing a boulderer reach for the small natural handholds of these giant-sized stones and scramble his or her way to the top, makes one wonder from where these erratics originated.

Local civil/geotechnical engineer Jake Hudson provides the answer: “The erratics at Donner park stem from the icefields formed at the Sierra crest on Donner Summit and Norden. These glaciers formed and fed the valleys around Donner Lake, Carpenter Valley, and Coldstream.”

But before I proceed any further, it’s important to note that not all erratics are of colossal proportion. Early on in my research, I learned that erratics can be categorized in any size range, even pebbles. What makes an erratic an erratic isn’t scale; it’s travel.

To understand this transportation part, it’s key to look at glaciation, which naturally starts with snow. Snow accumulates at high elevations and is compacted into ice. As ice accumulates, the glacier begins to flow from the force of its weight (several thousand feet thick during the last ice age). 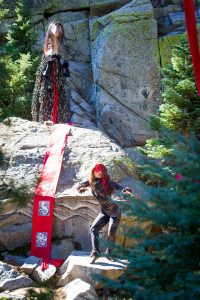 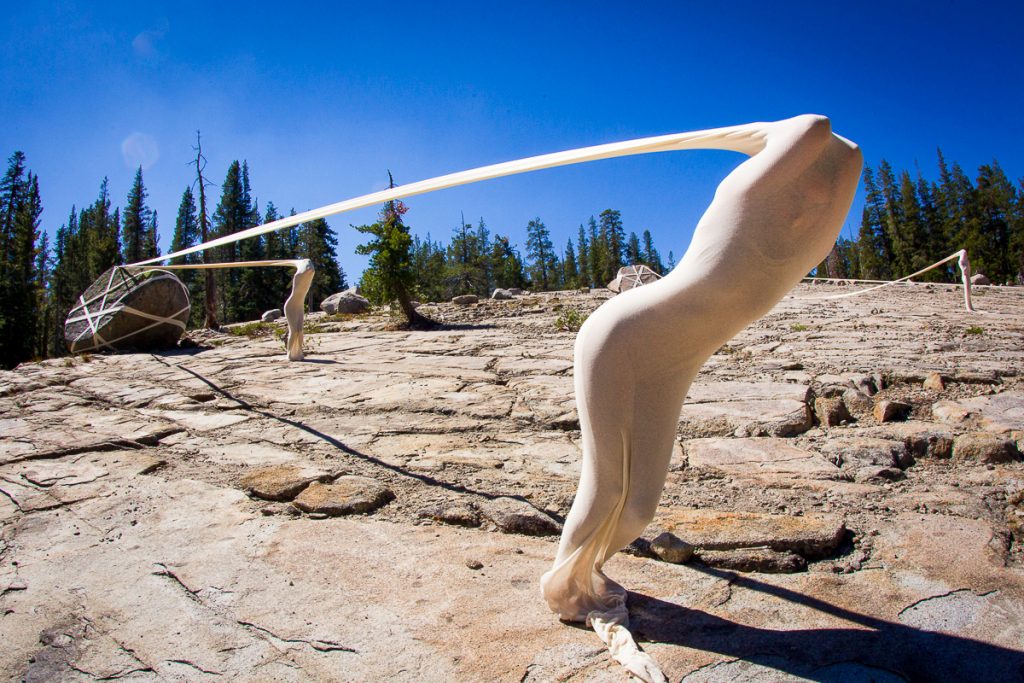 Describing how glaciers move, Hudson explains, “Glaciers are like conveyor belts, consistently moving substance downhill.” Or, as further outlined by writer Daniel Duane in a 2019 issue of The California Sunday Magazine, glaciers pick up small and large chunks of mountains either by breaking off bedrock and plucking material beneath the ice, or by collecting rocks that fall from surrounding walls. The ice then slowly carries those chunks downhill until the lowermost tongue of the ice sets them gently down.

Erratics differ from the accumulated debris of moraines and terraces – also glacier remnants. My geology lesson on these came as our local geo enthusiast, Hudson, who pointed to what’s left behind as the glacier moves downhill — moraines. The debris deposited to the side of glaciers is called a lateral moraine, which creates ridges. Examples of lateral moraines in our area include Schallenberger Ridge above Donner Lake and the Trout Creek region — the canyon to the north of Interstate 80. Donner Memorial State Park is considered an example of a terminal moraine, where the glacier stopped. From there we have outwash terraces — flat areas where streams and rivers deposit coarse sediment downstream of the ice. The Truckee Railyard, Truckee Tahoe Airport, and the flat areas along the Truckee River near Glenshire are all said to be outwash terraces.

The writings of John Muir, one of the first to document glaciers in the Sierra during his work in Yosemite National Park in the late 19th century, is a good place to look for understanding the unique Sierra nature of erratic boulders.

Muir drew rudimentary sketches of Yosemite’s glacial activity. Using arrows, he depicted the direction of glacial movement that carved the V-shaped Yosemite Valley and other areas into broad U-shaped valleys. As the glaciers retreated, what was left behind was a new landscape, he noted. Without ice, the topography instead featured deep chasms, worn or split rocks, and often erratic stranded boulders.

In a 1911 memoir about his 1869 excursion to the Sierra Nevada range, My First Summer in the Sierra, Muir described the erratics poetically: “… these boulders lying so still and deserted … no boulder carrier anywhere in sight, were nevertheless brought from a distance. They look lonely here, strangers in a strange land.”

A glacier, Muir continued, “[dropped] whatever boulders it chanced to be carrying at the time it was melted at the close of the glacial period.” In the Sierra (barring the southernmost 60 miles), the glacial period occurred during the most recent ice age, which began 1.6 million years ago and ended approximately 10,000 years ago, according to experts.

Because erratic boulders are carried miles from their source, they’re often deposited among rocks different from their own makeup. To determine the origin of the erratics, scientists examine the disparities from the traveled rocks to the home base rocks. Where did an erratic come from? Answer: Where do other rocks of the same nature live? Again, erratics are all about traveling, the Latin term errare meaning “to wander.” Geologists can also determine the actual direction glaciers flowed by looking at the marks on erratics, known as glacial polish and striations.

The Lyell Glacier, which Muir studied so closely in the Sierra, is now no longer considered a glacier by scientists because it no longer moves. Instead, scientists call it an ice field.

In his 1894 book The Mountains of California, Muir wrote that everything left behind from the moving slabs of ice — granite domes, deep canyons and valleys, and nearly all other features of the Sierra — are glacier monuments. Couldn’t we count the erratics right here in our backyard as magnificent stone statues? They remind us of an epoche long gone, but even more astonishingly, we see right before our eyes, that era’s remains.

Hitchin’ a Ride: Boulders on the Move
Business
6:00 pm

Hitchin’ a Ride: Boulders on the Move
Music
6:00 pm

Hitchin’ a Ride: Boulders on the Move
Sports & Outdoors / Wellness