Home Sections Mountain Life Hanging out at the Gatekeeper’s Cabin 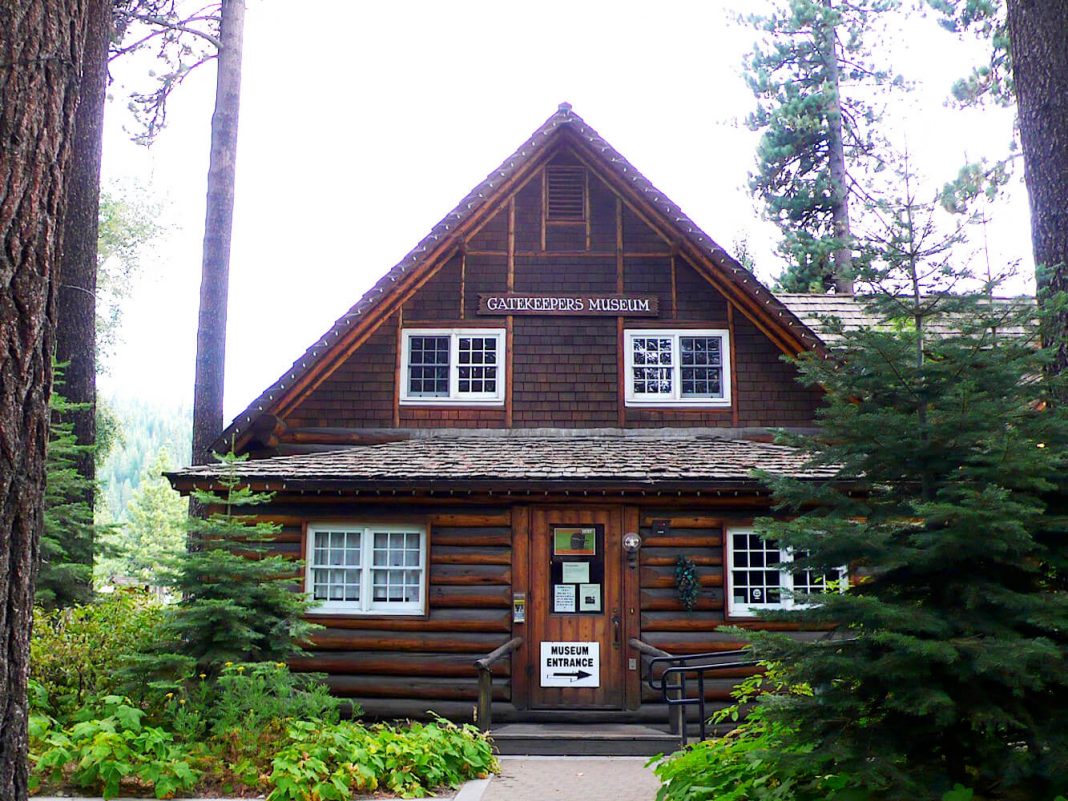 In light of the Tahoe City Dam’s 100th anniversary this year, I started thinking about my friend, Steve Dewalt. His father, Daryl, was the Tahoe City Dam’s gatekeeper. The Dewalts were the last family to live in the Gatekeeper’s Cabin, which was built in 1915 as the residence for all gatekeepers until 1969. Today, the rebuilt cabin houses the Gatekeeper’s Museum, home of a world-famous basket collection and peaceful centerpiece of the small park where the lake meets the river. But back in the ’60s, it was a very different place. 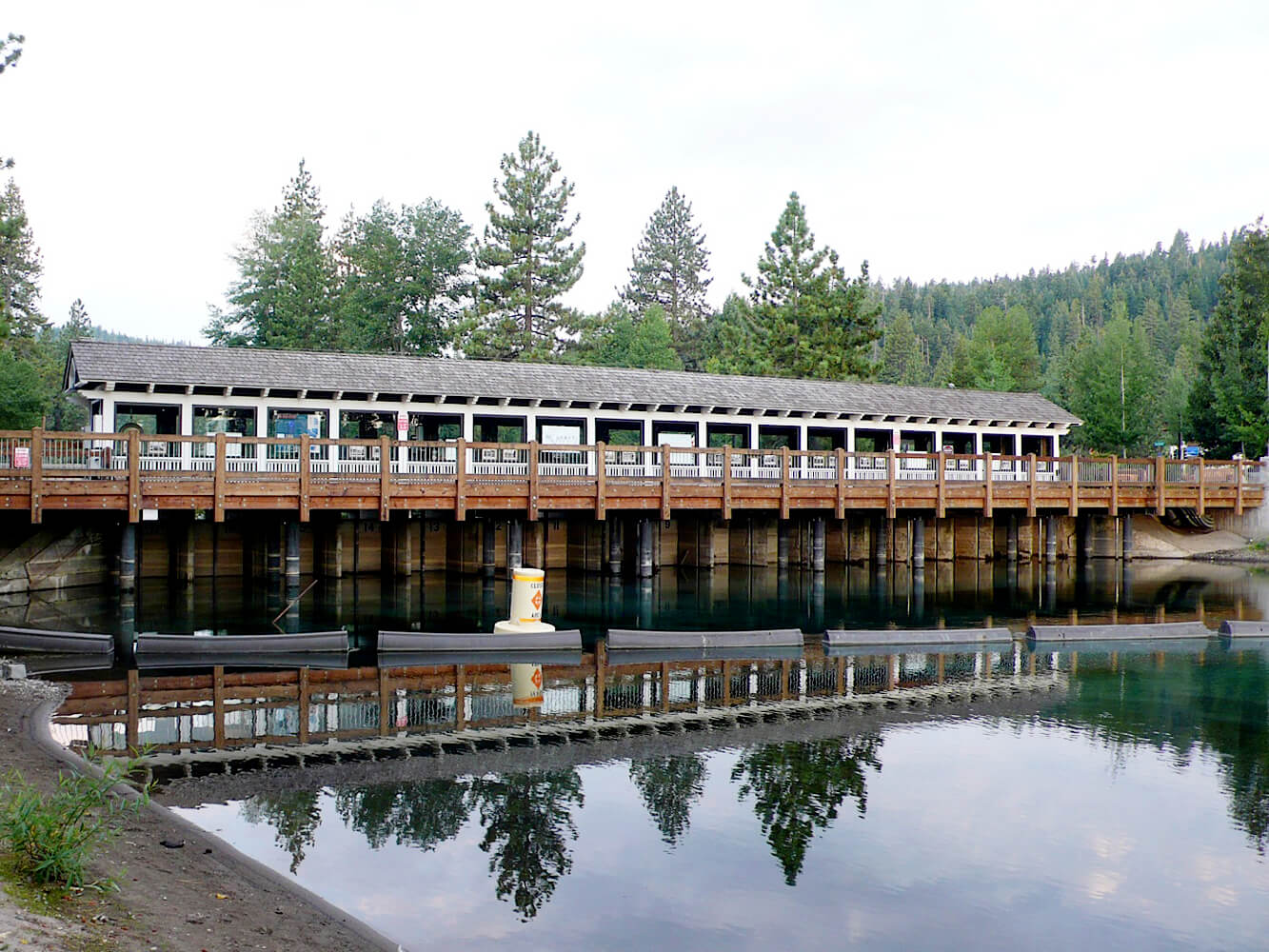 Daryl, whose father-in-law and grandfather-in-law were also gatekeepers, had two primary duties. First, seven days a week, he would check the weather station and send information to the federal watermaster in Fallon. Then, when the watermaster called, Daryl’s second duty would kick in. Steve would see his dad rush out the door yelling, “Gotta go raise up the gates.” Not sure what the hurry was, since raising and lowering the gates was a slow process.

It was a simpler time before rules and regulations. The job of gatekeeper came with a great house and lots of free time, but it didn’t pay much, so Daryl — who had four boys — used the land next to the cabin as a trailer park. They would pack in as many as 15 trailers into the tiny parcel where couples now quietly exchange their vows. Daryl had a horse that he kept next to the lake, and was also in the business of selling and renting boats. Steve remembers that at one point they had a barge with a shallow hull that people would actually pay to ride downriver from the dam to the Tahoe City Lumber Company.

Of course, when I was a little whippersnapper, I knew nothing about all this gatekeeping business. I do remember, however, the day when Steve and I made plans to catch one of the big monster trout whose great, great, great grandchildren still beg for scraps below Fanny Bridge. We snuck right below the sign that said, “Don’t fish here or you will be mangled, drawn, and quartered, and then your parents will be pissed!” Or perhaps it just said, “Illegal to fish within 1,000 feet of the dam.” Either way, it seemed like pretty risky business. We got our fishing poles and started to work our way down to the water, but then I chickened out. It wasn’t until recently that I learned that Steve would regularly fish right out of the windows of the dam and brought in some enormous catches. Ah, the advantages of being the gatekeeper’s kid. (Note to Fish and Game warden: I’m sure he was just telling me a big fish story. You know how those old fisherman are.)

That was pretty much the extent of my Fanny Bridge recollections until recently, when I was procrastinating on Facebook and saw a 1960s-era picture of the Gatekeeper’s Cabin posted by Steve.

Tim Hauserman: I remember hanging out in there and almost having the guts to fish below the dam.

Steve DeWalt: Don’t forget you almost hung yourself there. Remember the tree house!

Gulp. The tree house sat majestically 13 feet off the ground, with a rope coming up through the middle of the floor for access. On my first venture to this Shangri-La, I climbed up into the house, but then on the way down somehow got the rope caught around my neck, finding myself in the precarious position of needing Clint Eastwood to come along and shoot me down. According to Steve, I was hanging and couldn’t breathe. Fortunately, another friend, Jerry Stuven, was able to get the rope off me. “We thought you were a goner,” Steve remembered. Steve said they were at first relieved that I had survived, but then were angry when the next day his mom had the tree house torn down after hearing that one of those pesky Hauserman kids had almost met his demise.

Steve now lives in Ohio, but he is still friends with Jerry (hey, they saved some idiot’s life together, which makes for life-long bonding). With fond memories of his years in the cabin, Steve tries to get to Tahoe as often as he can. When he looks back he realizes that when your dad has a job that comes with a lakefront cabin, you are living the good life.

For the Dewalts, their time of gatekeeping was a simple and happy one. Steve would spend his days swimming and fishing, or hunting for ancient glass bottles and arrowheads along the lakeshore. Daryl got to spend his days in touch with the rhythm of the lake, at the center of one of the most beautiful places in the world, and with a touch of a button, make the water begin to flow.

~ Tim Hauserman frequently walks the Lakeshore Trail behind the Lake Tahoe Dam and chats with John Sutter, gatekeeper for the past 25 years. Sutter must surely be jealous that the job no longer comes with lakefront accommodations. Comment on this column below.

Hanging out at the Gatekeeper’s Cabin
Arts & Culture
All Day

Hanging out at the Gatekeeper’s Cabin
Sports & Outdoors / Wellness