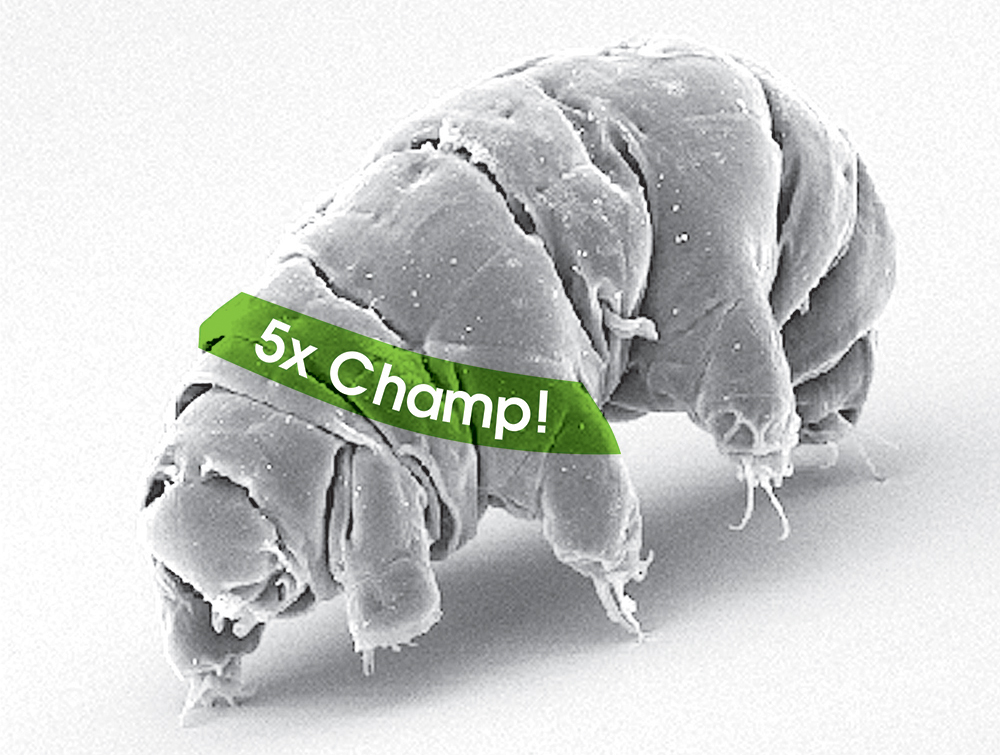 When I first learned of the nature talk at the Galena Creek Visitor Center on water bears, I couldn’t imagine what the subject matter could be. Black bears’ relationship to water?

Turns out the talk had nothing to do with bears, but instead, tiny aquatic organisms called tardigrades, visible under a microscope of at least 40x magnification. Only under a high power microscope can the naked eye see the bear-like resemblance to what otherwise looks like a short pudgy caterpillar. However, do not call them a caterpillar or worm or insect of any kind; they have their own phylum: simply, tardigrade.

In her talk “Teensy-Tiny Tardigrades: Wondrous World of Water Bears,” Marianne Denton, an aquatic ecologist, shed light on all aspects of these unique creatures, from their general characteristics, to their sex life, to their time in space (what, space? … I’ll get to that later). One of the most interesting facts is their omnipresence; they’re everywhere! To survive, all the tardigrades need is a film of water covering their teensy-tiny bodies. They live in runoff in parking lots, on top of moss and lichens, and in regions with extreme temperatures, such as tropical rainforests or the high elevation Himalayas. Locally, the tardigrades live in creeks and in Lake Tahoe, but of course we can’t see them — not even with a macro lens iPhone attachment.

These translucent tardies, .50 mm long, get their chubby caterpillar image from their three body segments, each segment with a pair of legs and one pair at the rear. With bent-over claws, plus a hunched over body and the way they lumber and swim slowly, tardigrades have a bearish appearance, hence the name “water bears.”

The most bizarre part of this creature is its protruding pig-like snout (another alias: “moss piglet”) the “buccal pharyngeal,” with two rings of teeth inside the mouth. To catch its food — algae, bacteria, nematodes, and other tardigrades — it projects a saw-like tongue, or “piercing stylet,” out and in like a trombone. Not such a cuddly bear in this act, the tardigrade looks more like a scary alien in Star Wars or a whale with its mouth open wide to catch a sea of krill. Eating is pretty much their thing, making them nice and plump for the stoneflies, mayflies, and midges that eat them.

So what do these tardigrades do other than eat? Like most creatures: poop and have sex. It may seem strange to recommend a video of a tardigade excreting its meal, but check out “Here’s the real poop on tardigrades,” from Science News, where the little guy does just that. Plus, you can see it squirm along in a film of water. As for sex, unbeknownst to us we help them with sex —  well, not sex per-se — but spreading their eggs. By walking in a puddle at Safeway, you might be carrying tardigrade eggs on the bottom of your shoes (2 to 30 eggs), to their next place of residence where baby water bears hatch two weeks later only to live a mere 70 days. However, while short lived, tardigrades have been around a long, long time; as in Mid-Cambrian age, as in 500 million years!

Why so long? The tardigrade is one hardy specimen. According to Science News: “Decades without food or water? No problem. Temperatures plummeting to -457.6 degrees Fahrenheit or skyrocketing to 302 degrees? Bring it on. Even the crushing pressure of deep seas, the vacuum of outer space, and exposure to extreme radiation don’t bother water bears.”

Yes, even in outer space these “extremotolerant” creatures, when dehydrated for ten days in space and then rehydrated back at earth, “… a handful of those with no radiation protection came back to life and produced viable offspring,” says Smithsonian Magazine. How is this possible? Tardigrades curl up into a lifeless ball called a “tun” and produce a protective gel-like sugar “trehalose” over their bodies that preserves the membranes that make up the tardi’s cells. Curl up into a ball, hang out for a decade, take a little dip in water, and they’re back to life!

To think that this microscopic bear-piglet-slow stepper, all 1,200 species of them, can survive just about anything, is nothing short of miraculous, which is why scientists test them in all kinds of environments.

~ Do you have a question about our region’s environment? Email editors@moonshineink.com.