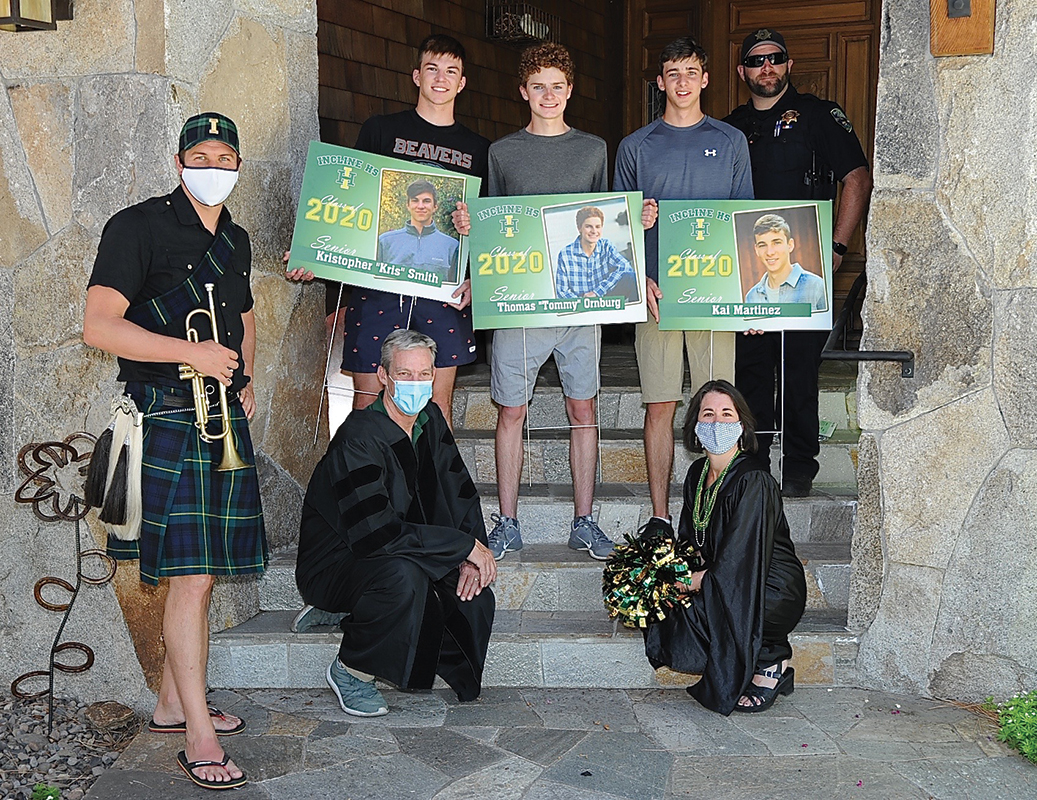 Their smiling faces are on banners, adorning light posts, and strewn above parking lots. In their eyes and smiles you can see pride, excitement, and the hopes and dreams of their futures. They are the graduating class of 2020. What you don’t see is the sadness and disappointment that came when many senior milestones like class trips, proms, awards nights, and graduations were canceled as a result of coronavirus safety measures.

Leave it to the fine folks of the Truckee/North Tahoe area to step in to help ensure this most-unusual school year is ending on a more positive note. From simple gestures like yard signs to more grand-scale efforts like an adopt-a-senior program, teachers, faculty members, parents, and the community at large have rallied to show their pride and support for graduating seniors in a year that has been anything but typical.

“They were very disappointed, but they are also very resilient,” Principal Andrew Yoxsimer said of the Incline High School class of 2020.

With only 56 students in total, the graduates of Incline High are a close-knit group and the community is more than happy to celebrate their achievements. For band director Todd Holway, that would be in a literal sense: Holway played “Pomp and Circumstance” on various instruments at each graduate’s home as he joined Yoxsimer, Vice Principal Kari Michael, and Washoe County School District police officer Cory Coombes in a door-to-door delivery of the students’ caps and gowns.

While a virtual graduation ceremony is going to air on KOLO on June 18, Yoxsimer is waiting on approval to have the grads walk at a ceremony July 8. If that doesn’t work out, there will be a drive-thru diploma day during which the students will pull up to the school and be presented with their certificates one at a time as they cruise by.

The townspeople have shown support through the adopt-a-senior program, a non-WCSD-affiliated grassroots initiative started on Facebook, which lets people “adopt” a graduate, surprising him/her with some of their favorite goodies.

Family, friends, and residents cheered on the seniors as they paraded through the streets of lower Incline Village in festively decorated cars on June 10. Despite the turn of events that canceled many senior milestones, some students expressed to Yoxsimer — “Yox” as they call him for short — that these unique ways to celebrate, such as cap and gown deliveries and photo banners in the Raley’s shopping center, have in a way made this time even more special.

Yoxsimer is hopeful that the class will seize the moment to look on the bright side of the past few months’ circumstances. “Although this is not the way you wanted it to end, there is so much more to celebrate, so much to look forward to,” he said. “This can really shape the way you impact the world moving forward.”

Over in Truckee, the lamp posts along Commercial Row in historic downtown are themselves showcasing a bit of history with photo banners of each of the seniors at Truckee High School. The senior class there encompasses 179 students who live from Floriston to Donner Summit, with even a few from Reno, so door-to-door cap and gown deliveries weren’t feasible. With an in-person graduation planned for Aug. 1, the school has meanwhile orchestrated a number of milestone events to be held virtually — athletics signing day, senior farewell, yearbook signing, graduation, and even prom. Another bit of history in motion: For the first time ever, students will be permitted to decorate their caps to wear at graduation.

For teacher and yearbook director Tamara Chisholm, the yearbook is always a means for students to have a record of living history. “The yearbook is meant to tell the story of their lives and what’s going on at the time,” she said.

The historic factor, Chisholm said, makes it all the more important for every student to be able to obtain a yearbook this year. At $80 each, it’s not always feasible, but donations have been coming in and so far, 21 books have been purchased for students who otherwise would not have been able to afford one.

“THS’ class of 2020 has overcome more than any other class in the history of the school district!” Principal Logan Mallonee wrote in an email to Moonshine Ink. “They have ended their high school career in a way that no others before them have. They have accomplished a great deal and they have persevered.”

Mallonee said that the phrase “silver lining” has been a running theme during this challenging time and that this year’s THS graduates have shown their resilience by focusing on the positive. “I know my seniors will leave high school with many silver linings in mind since they often make sure to share those with me during our conversations,” she continued. “I hope they know how much this community and I love and support them when they move on to their next endeavors!”

Good energy is also flowing over in the Basin. As part of the Tahoe Truckee Unified School District, North Tahoe High School is offering many of the same virtual experiences that THS is for its students. They’ve also honored grads with banners, yard signs and will hold a drive-thru diploma ceremony, even though an in-person graduation is planned for Aug. 4. North Tahoe parents are also running an adopt-a-senior program, much akin to that begun by Incline parents.

At North Tahoe High School, Principal Joanna Mitchell has watched as the seniors there have learned to embrace the power of positivity.

“This situation has been disappointing to our seniors to say the least!” Mitchell wrote in an email. “It has been hard. But they have pushed through the disappointment and found the joy in the subtler things. They have accepted things needing to be different and have worked with us to make it as special as possible.”

Mitchell has witnessed in her students the same resilience seen by Yoxsimer and Mallonee in theirs.

“I hope they will be able to tell their children, ‘You’re bored? You have to walk to school uphill both ways in the snow? When I was your age, I was locked in my house with my parents for over 100 days!’” she joked.

In all seriousness though, Mitchell hopes her students were able to determine what was in their control and what wasn’t, and that they did what they could to make the most of the situation they were given.

While the larger schools like Incline, North Tahoe, and Truckee typically get all the fanfare when it comes to publicity, there are equally as notable happenings at the region’s smaller educational institutions. Forest Charter is one such school, as much a part of the area’s educational landscape as its peer schools, and they, too, are celebrating the accomplishments of their seniors, though perhaps on a smaller scale.

With campuses located in Truckee, Nevada City, and Auburn/Forest Hills, Forest Charter typically brings students together for a joint graduation ceremony at Veterans Hall in Grass Valley. When nonessential businesses and schools were shuttered, Forest Charter canceled in-person graduation and, like others, opted for a virtual ceremony.

In total, the Truckee campus graduated 23 seniors. Such a small number made for an especially personal experience for each of the graduates. At Forest Charter, each student is paired with a supervising teacher for the length of enrollment.

“Some [students] we’ve had since seventh and eighth grade,” said Assistant Director Janice Eggers. “So we know them quite well.”

To the faculty, each student is not just a name. They’ve really gotten to know everyone on an individual basis, so at graduation, each student’s supervising teacher gives a speech about that particular student.

“It’s their shot in a spotlight for the evening,” said Eggers, who went on to explain that when presented with the option of having an in-person ceremony later in the summer, the class declined, the students saying they’re ready to move on to the next chapter.

And even though graduation went virtual, the show went on. Each grad was highlighted in a slideshow while “Pomp and Circumstance” played in the background, with a still shot of the student as his/her supervising teacher paid homage in words. Upon the conclusion, the students flipped their tassels as they officially became members of the class of 2020.