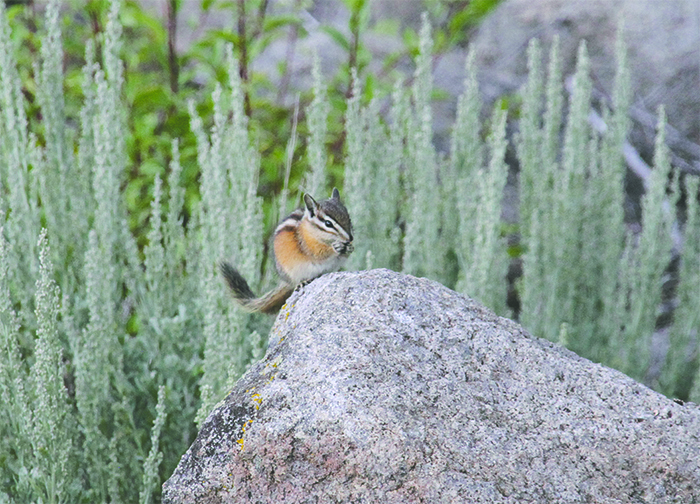 In the old and the new Alvin and the Chipmunks franchise, Dave-the-human takes on the escapades of three provocative mammals: Alvin, Simon, and Theodore. Heard throughout, whether in the original song in 1958, the old TV series (1961), or the more modern animated movies (1987-2015), Dave’s resounding cry, “Alvin!!!” is remembered by most as the siren of a human’s frustration with a high-strung Tamias (genus of chipmunks).

Whether one thinks of the anthropomorphized Alvin, or the true-to-life, striped-faced and backed rodent, chipmunks are always on the go — especially at this time of year. It’s late autumn, and chipmunks are busy scatter hoarding, collecting and stashing seeds in preparation for winter.

In one study, conducted by University of Nevada, Reno Professor Stephen Vander Wall, in an area 5 miles northeast of Lake Tahoe at 6,000 feet, they found “an estimated 29,629 bitterbrush seeds and 5,945 Jeffrey pine seeds each year” scatter hoarded by the yellow pine chipmunk (Tamias amoenus).

The study added that the numbers “are likely underestimates and do not include the many thousands of seeds eaten during the harvest period.” The conclusion here is the significant role chipmunks play in forest ecology through the spreading of seeds, tying the name Tamias, in Greek, to the terms “dispenser,” or “steward” (Merriam-Webster).

How a chipmunk gleans a seed from a cone has everything to do with its sharp teeth. First, the chipmunk grasps the fruit with its incisors, transfers it to its forepaws, extracts the seed (achene) from the “parchment-like husk” with its incisors, and lastly, discards the paper husk.

Paper or Plastic? Neither; I Have My Own.

After discarding the husk, the chipmunk moves the seeds into its cheek pouches, a grocery bag of sorts, swirling its tongue around to push the seeds to the side. Once the seeds are set in the pouches, cheeks bulging like Marlon Brando in The Godfather, the critter scurries to cache its food in and around its burrow, in scattered pits dug in dirt on the surface of the ground.

Vander Wall and his team observed some different activity with “late autumn chipmunks.” They noticed that the late-comers were partially “redirecting their foraging behavior away from harvesting fallen pine seeds and toward recovering caches and pilfering the caches of other rodents.” Not until mid-October did these late fall chipmunks, with full cheek pouches, begin to move seeds into their winter pantry. To back up a bit, it’s important to note a chipmunk’s comprehensive diet; exclusive seed eaters, they’re not. Call them omnivores: They’ll eat almost anything. Or call them frugivores (fruit and berries). Or granivores (seeds). Or invertivores (insects among other invertebrates). They’ll eat roadkill. They’ll eat fungi. They’ll eat frogs. They’ll eat buds, bulbs, and bird eggs. Again, they’ll eat almost anything.

After prepping for the winter, chipmunks hibernate, taking cover in their burrows. Tamias hibernate between mid-November to mid-April, but awaken every five to six days to glean their caches. With eating comes dispensing, however, so after consuming a meal a chipmunk will pee and poop before entering a deep sleep once again.

A chipmunk’s territory typically encompasses approximately half an acre, but can range up to 3 acres. Mostly, it sticks close to home. Its nest, built of leaf litter and grass, measures approximately 7 to 21 inches deep, under a stump or a log or a rock; nests are also built above ground in woody vegetation. Some chipmunks build their homes and food-storage units in burrows underground as part of a tunnel system, passageways approximately 2 inches wide and 10 to 30 feet long. The nest, centered in the tunnel structure, resides near side pockets filled with stashed seeds.

After spring, and following a two-month gestation period, chipmunk babies come along. While the average litter size is four pups, chipmunk mothers can birth anywhere from two to six pups, also called kits. The babes won’t remain home for long, as a mere six to eight weeks later, the pups set off on their own.

Which ‘Munk Is Which?

If you see a chipmunk in your neighborhood, you might believe it’s the same chipmunk, and it might be, but with a short life span of two to three years, your repeat visitor is most likely a different one than in years past. With predators such as coyotes, hawks, bobcats, owls, and jays, a chipmunk faces an even shorter life. While chipmunks are quick to escape predators, they’re small, weighing only 1 to 5 ounces. Easy prey.

As to which species is which, the yellow pine from the lodgepole, shadow from the least, least from the yellow pine, chipmunks are a tough species to differentiate. The vague distinctions include lighter stripes, longer ears, whiter spots behind the ears. All in all, there’s no clear distinguishing marks to tell one from another. Plus, as they’re usually on the run, even a field guide and binoculars aren’t much help in identification.

One chipmunk-looking squirrel that is easy to identify is the golden-mantled ground squirrel (Callospermophilus lateralis). Like a chipmunk, the golden mantled squirrel wears the quintessential stripes on its back; however, the lack of stripes on its face distinguishes it from its smaller cousin. Other characteristics of this chipmunk look-alike include a shorter tail and larger body.

Alvin aside, with his nasally voice that sounds nothing like the cheep, cheep, cheep, cheep-ing of a real chipmunk, Tamias is a common mammal in the Sierra, part of the squirrel family known as Sciuridae. They’re part of our everyday sightings, these little critters, until fall passes on. For now, winter is near as their absence reveals. It’s time to take stock of our pantries. It’s time to burrow-in.

Main Image Caption: SHORT WINTER’S NAP: Although they will hibernate during winter, chipmunks will wake up to eat every five to six days. Photo by Sarah Miller/Moonshine Ink

Getting to Know Alvin, Simon, and Theodore
Business
6:00 pm

Getting to Know Alvin, Simon, and Theodore
Music
6:00 pm

Getting to Know Alvin, Simon, and Theodore
Music

Getting to Know Alvin, Simon, and Theodore