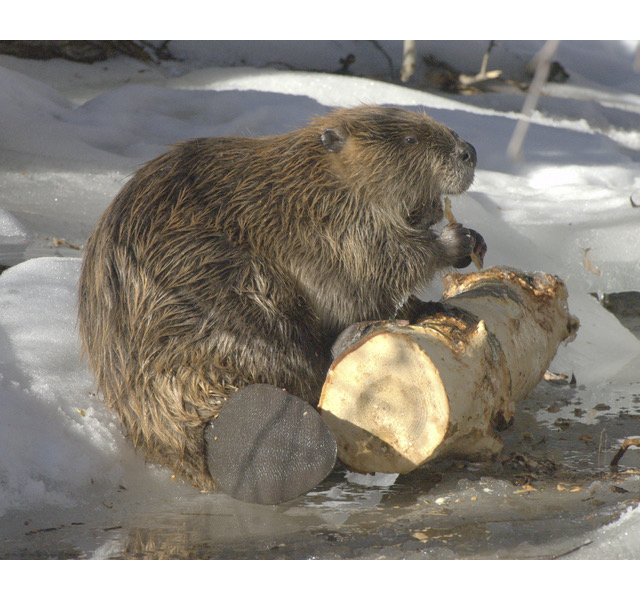 The beaver has long been thought to be non-native to the Sierra, but new evidence proves otherwise. As winter approaches, we will be working right alongside this “native” resident as it too gets ready for the cold, hard season.

First, let’s get the controversy out of the way. Despite the claim that the beaver is non-native to the Sierra, 2012 research proves otherwise.

“The beaver was trapped out a long, long time ago, which lead to early naturalists erroneously assuming that beavers weren’t native to the Sierra,” said Will Richardson, co-founder and executive director of Tahoe Institute for Natural Science. “This got passed down as dogma among agency personnel.”

However, in a California Fish and Game article authors Richard Lanman and Charles D. James dewbate the assumption that beavers are not native with evidence from 1988 when several beaver dams were re-exposed at Red Clover Creek, approximately 60 miles north of Truckee.

“Radiocarbon dates from the different portions of the remnant beaver dam were AD 580, first construction; AD 1730, dam was reused; and AD 1850, repair of a significant breach occurred,” Lanman and James reported. “After 1850, the dam was abandoned and buried beneath sediment. In 2011, another beaver dam was exposed in Red Clover Creek; its radiocarbon analysis dating at AD 182.”

Sherry Guzzi of the Sierra Wildlife Coalition summarizes the results of the study: “This is not to say that today’s Tahoe beaver is from the original Sierra Nevada population, but there were beavers in Nevada’s Humboldt River and other locations in Nevada from where they could have migrated. Some of today’s beavers are definitely descended from when beavers were re-introduced to Sierra Creeks by California Fish and Game in the ’30s and ’40s, specifically to restore watersheds.”

Beavers, who have a life span of 10 to 15 years, mate for life and raise one or more babies, called kits, for 2 to 3 years before they head off on their own. Over these two years the kits are taught building skills, and, being herbivores, how to eat leaves, roots, twigs, willows, and aspen bark — nope, no fish. The largest rodent in North America, beavers can weigh up to 40 to 50 pounds. Rodents are mammals characterized by having upper and lower pairs of ever-growing rootless incisor teeth.

A beaver’s webbed feet make for good swimming paddles, just like a duck’s, and they use their large, wide, flat tails not only as rudders, but also to make loud sounds by slapping the surface of the water with them as a warning signal to predators. Beavers have excellent diving skills and can stay underwater up to 15 minutes because their ears and nose have flaps that close, and their eyes are protected with a transparent, goggle-like inner eyelid.

Beavers do not hibernate as one might think, but like most mammals that don’t, they slow down their activity. This time of year, beavers are industriously getting ready for the long winter. First, by stocking their pantries with the foods mentioned above. Second, to keep warm, beavers waterproof their coats by applying a yellowish oil, castoreum, taken from their castor glands. To do this, a beaver sits with its tail curled under its body and extended in front of it, then uses its front feet to reach the secretion under the skin near the base of the tail. At split toenail called grooming claw on its front feet helps disperse the oil through its fur. While it may seem the oil would be anything but sweet smelling, it’s often likened to vanilla. This castoreum also helps with keeping other beavers away. To define a beaver’s territory, it makes “scent mounds.” The beaver carries mud from a creek or pond bottom in its front paws up to a pile on the bank, then walks over the pile to mark it with the scent from its glands.

The common perception that beaver lodges are always built inside dams, say, in the middle of a river or stream, is false. “They do prefer lodges in the middle of a pond, creek, or river, just not in the dam structure itself; that would make a hollow/weak place, and beavers are ‘nature’s engineers,’” Guzzi says.

Lodges are built upstream of dams where the water is deep. In Tahoe, where creeks aren’t very large, Guzzi explains that most lodges are “bank burrows,” built into the side of a bank underwater, and reinforced on top with sticks and mud to protect from predators like coyotes, bobcats, or bears.

To make dams, beavers often exploit natural blockages, like fallen trees or rock ledges. Otherwise, they fell trees, or chew trees upstream, attempting to make them fall into the water. Once a tree is felled, the beaver chews off branches into sections it can drag or float. Lastly, they weave sticks and branches together and pat mud onto the structure for reinforcement. In regards to the depth of a beaver dam, Guzzi says, “They need to have just enough water to protect their underwater entrances, but they also need to be deep enough not to freeze solid in the winter so they have access to their food. On our smaller creeks, the dams are usually only a foot or two deep.”

While it may seem like beavers are underwater all the time because we rarely see them (but mainly because they’re mostly nocturnal), after they swim into their lodges from underwater entries, they eat and sleep on above-water platforms built inside.

Beaver dams slow the water’s flow, which reduces erosion and flood damage. Thus, dams filter water by trapping sediment and pollutants before water flows downstream, and in our area that means ultimately into Lake Tahoe. Dams also replenish water tables as water seeps into the ground.

As you get ready for winter, remember this resourceful mammal and its valuable winterization techniques: build a layer of fat (easy to do with Thanksgiving around the corner), stock your pantry with a winter’s supply of food, and attend to any last minute projects in your lodge.
In other words, get busy like a beaver!

Do you have a question about our region’s environment? Email editors@moonshineink.com.

Getting Ready for Winter
Sports & Outdoors / Wellness
10:00 am

Getting Ready for Winter
Education