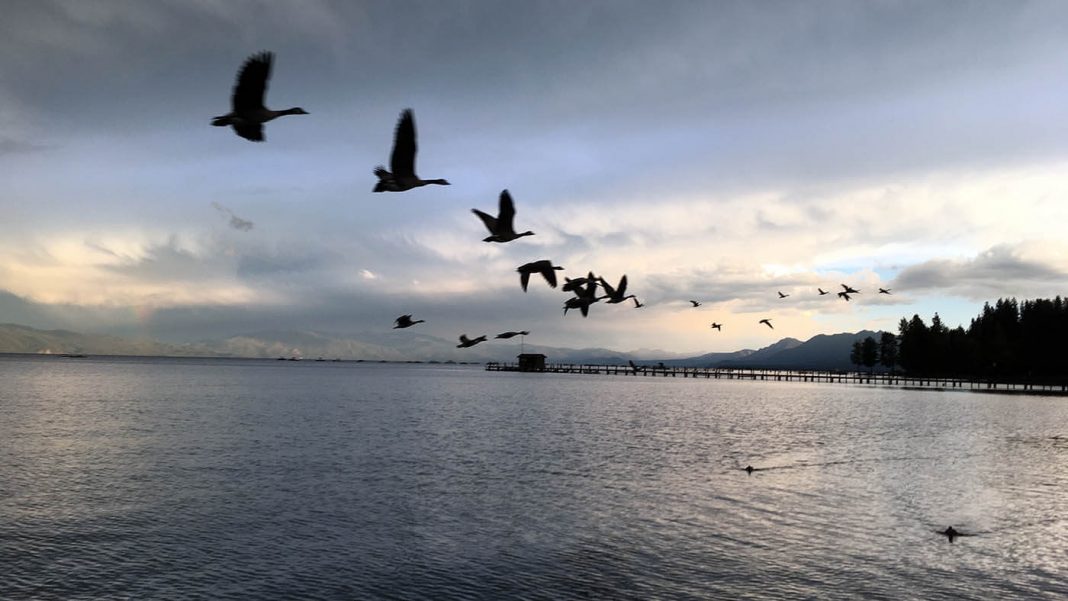 The popular Commons Beach in Tahoe City has a lovely stretch of grass just above the shoreline, and a few hundred feet away lies the Tahoe City golf course. Every morning a crew of two from the Tahoe City Public Utility District spends an hour cleaning up goose poop on the beach alone. Since geese produce about a pound and a half of poop each day, “the amount of feces at the golf course is all but impossible to manage, and hence it’s on the course,” said Kurt Althoff, TCPUD spokesperson. “They are a nuisance, for sure!”

Forty years ago, Canada geese were a summers-only sight in Tahoe. Now they seem to be everywhere, all year round. Their numbers are on the rise all over the country, but experts debate whether all those birds are damaging the environment of Lake Tahoe, or just causing a messy nuisance.

Will Richardson, from the Tahoe Institute for Natural Science, says that geese are like “flying cows.” They love to eat grass, and the region has provided them with their perfect habitat: lots of manicured lawns and golf courses right next to the water. The population has also grown because people feed the geese and the number of natural local predators has declined.

Another contributor to the population increase, according to a Cornell University study, is that some groups of geese are no longer migrating between Canada and Central America every year, but rather staying in one place all year long – quite often in places that are settled by humans. In urbanized areas, where fewer coyotes and other predators live, the geese have a better survival rate than birds who migrate through wild places do, reads the study.

“Some scientists think that if we reduce the acreage of fertilized lawns, a good source for geese, we could limit goose populations,” wrote researchers Heather Segale and John Cobourn in a paper written for the University of Nevada Cooperative Extension. “In the meantime, you can encourage beach patrols and neighborhood groups to be aware of goose waste near beaches and streams.”

As far as the environmental impact of all that goose poop on the Tahoe environment? Watch out. The United States Department of Agriculture Wildlife Services says, “Geese are known carriers of several potential pathogens including E. coli, salmonella, staphylococcus, and streptococcus, along with the protozoan Cryptosporidium. In addition to bacteria and other microbes, there is organic waste, nitrogen, and phosphorus in fecal material. If feces enter water, the input of contaminants can have immediate public health and economic effects where water is utilized for drinking and/or recreation.” 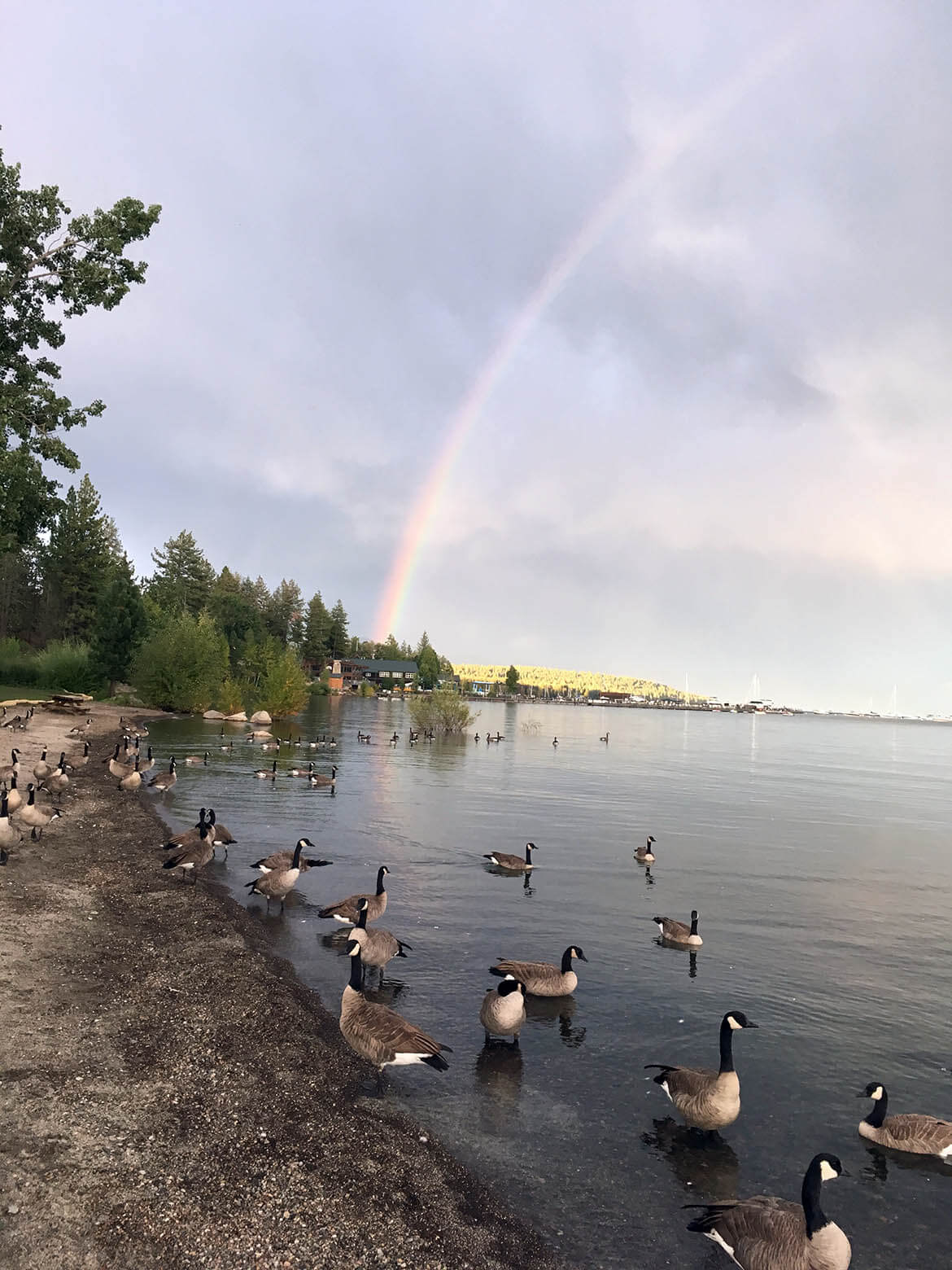 Segale and Cobourn, however, indicate that goose waste may not be as bad for the lake as waste from other animals. “Julie Regan, TRPA, points out that geese are ingesting nutrients that already exist around the lake,” they write. “The geese are basically recycling the fertilizer they’re eating from the grass. Dog waste, on the other hand, can actually add to the overall pollution of the lake because their food source is over and above what is in the environment.”

Richardson agrees, saying, “The [dogs’] contribution to messing up lake clarity has more to do with landscaping than the geese.”

Dayton Marchese, an engineer with water resource management company Opti RTC, says “I wouldn’t expect the geese to be adding enough nitrogen and phosphorus to Lake Tahoe to cause a real spike; the thing I am concerned about is disease. If there are swimming areas where a lot of geese hang out, somebody could ingest some goose-poop bacteria.”

While there is debate on the birds’ environmental impact, there is no debate that geese can detract from the experience of sitting along the Tahoe shoreline. Not only is poop taking over the grass, it also creates a slippery mess.

In the past, several golf courses and beaches in the region rounded up geese and moved them to Stillwater Refuge in Nevada. Richardson said that didn’t work, as he has seen lots of geese banded at Stillwater on the beaches of Tahoe. The problem with containing birds is they can fly away.

Instead, the Incline Village General Improvement District came up with an innovative plan to deal with the problem. While dogs are not normally allowed on the beaches, IVGID’s Resource Conservation Officer Madona Dunbar started a dog goose patrol 12 years ago. “Citizens in the community that have social dogs good with people can have special access to Incline beaches to dissuade the geese.” Dogs get ID cards, and wear a vest when they go to play on the beach. Similarly, Edgewood Golf Course in South Lake Tahoe has a staff dog to chase the geese away.

While these techniques may make the geese high tail it for a time, other methods would be needed to make a permanent dent in the population. Reducing the acreage of lawns and manicured grass in the region would have a major impact. Other areas have also tried covering goose eggs in corn oil to keep them from hatching.

And then there were the desperate efforts of the folks in Ocean Pines, Maryland. In an effort to preserve the water quality in the community’s ponds, after dealing with the problem for years without killing, in July of this year the association decided to euthanize 290 geese. Association officials say the ponds and recreational grounds were “overrun with goose poop.” Meat from the geese was donated to the Maryland Food Bank.