Home Sections Mountain Life From the Depths of Sadness They Rise

Waves lap against the buoyant fiberglass Sunlight caught in tiny droplets, refracted across the surface, makes little rainbows atop seawater. Salt stings virgin eyes, and a whip of the head over the shoulder pushes soggy hair back when there are no free hands to do so. Those hands, attached to limbs that fight, and clutch, and pull, and grasp, dig into the ocean with determined yet melodic ease.

In 2012, when Truckee’s Jamie Schou was diagnosed with synovial sarcoma (a rare form of cancer) at age 33, the next two years of his life became not a battle with death, but a battle with life. It was a challenge to fit all of the million ways to “send it” into his daily life; to live out a lifetime-worth of adventures on a journey that would sadly end only two years later.

The oldest of four, Jamie was Katie Schou’s big brother, best friend, skiing partner, and so much more. They did everything together. Jamie’s diagnosis was rare, his treatment options limited, and his prognosis wasn’t great.

“As he went through this, it just gave him more and more motivation to live every day with purpose, and with gratitude,” Katie remembers.” He became so grateful for every day that he had because he realized that he didn’t know how many more days he would have. And so, he set goals every day.”

Jamie found the beauty in every situation. The things that brought him joy and life were his community in Truckee and the activities that he loved: skiing with his friends, being on the lake, being on the trails.

“Those activities made him feel alive at a time when he was facing his mortality,” Katie says. “So, these kinds of experiences became what he was fighting for. The people in your life, doing the things you love, being outside. It became the light at the end of the tunnel for him. When he was in treatment, he would make plans for his days out of treatment. Those activities became a source of strength and courage going into the next round. He’d go back in feeling empowered.”

During this time, Jamie discovered a disconnect between his “real life” and his “cancer life.” Katie says his doctors would scold him when he’d come in with a sunburned bald head from paddling, or dinged-up legs from biking, but that his community couldn’t really relate to his diagnosis either. Jamie’s dream was a foundation called Send It, with which he could help other youngsters up against a battle with cancer connect with each other.

“His vision with Send It was, [since] he found so much strength and joy through these activities, to make those available to other young people who were going through this. And also, to create a sense of community and peer support where it’s really hard to find that in your normal life when you’re going through cancer at this age,” Katie says.

Today, Katie and her sister Caroline run the foundation, which hosts outdoor adventure trips for cancer fighters and survivors ages 21 through 40, free of charge. One thing many don’t realize is the cost incurred in fighting cancer, especially on a young person who may still be starting a career or have a young family at home. The participants experience skiing, biking, surfing, and other adrenaline-filled challenges, often for the first time in their lives. And when they catch a wave for the first time, they light up.

“You’re cautious, of course, and you take into account what your body has been through and what your capacity is, but you go for it,” Katie says. “You get down the hill or you catch a wave and what that does for you and your mental state, and how you look at the next round, or what you’re going home to, is so empowering.”

You Have to Grow Through the Sadness

A rush of wind bites bare cheeks. Adrenaline pumps surges of courage through stretched legs and extended arms that lean into boots and clutch familiar poles. The gentle swoosh of frozen water turned into flour-light powder is the only sound in the still air. There’s a calm everywhere around.

It’s perhaps these qualities of skiing that one becomes addicted to, craving the rise to the challenge and the satisfying come-down of the day’s accomplishment. But in Tahoe, that’s nothing without the camaraderie. The care for your buddies, the reverence for these vast mountains, and the gratitude for each day spent playing in them. The knowledge that this can’t last forever, but we can sure as heck love it while it’s here. It’s those superior qualities of awareness and intrigue for the world around him that pro-skier Shane McConkey embodied.

With the recent 10th anniversary of his death, his name still echoes everywhere in the Tahoe community, almost in slow motion. “Shane … Mc … Conkey” — the memory of his playful spirit is willed to last with each syllable. With a gentle smile, eyes full of passion, and a soft voice, his wife Sherry McConkey has continued his legacy through the Shane McConkey Foundation.

“We basically give to people that we think are doing incredible things for our community, and people in need,” Sherry says. “We care for the community, we care for our environment, and we care for our animals. It’s a lot, but it’s been doing well. We’ve been able to spread out the love as much as we can.”

The foundation has grown bigger than anything Sherry imagined. Buried in grief that first year, Shane’s sponsors, friends, loved ones, and the Tahoe community wrapped their arms around her. She wanted to turn that love into something more, by creating an event or fundraiser to give to the causes Shane would’ve supported. Due to the immense outpouring of support, the effort instead grew far beyond that one event, morphing into the nonprofit it is today.

“He’s influenced so many people, and I think people love celebrating him because we make it in a way that’s fun and not sad and not that serious. It’s been successful because of Shane and this community,” Sherry says.

As the foundation evolved, so did she, watching the outpouring of support for Shane, and observing the capacity for those around the world to show caring. That support helped her heal from the immense pain she felt those first years after losing him.

“The biggest lesson I’ve learned is that if you sit in sadness and you don’t move on, nothing’s gonna happen,” she says. “I am always gonna be sad no matter what, but I love life and it’s beautiful and I’ve learned so much about the kindness of people all over the world.”

There wasn’t a moment Sherry didn’t see that same kindness in Shane. He was concerned about the environment, he loved animals, and he loved helping other people — some of the themes for which the foundation continues to raise money. In 2018 alone, the foundation raised over $47,000, donating the funds to Tahoe Truckee Unified School District, Protect Our Winters, Make a Wish Foundation, and Humane Society of Truckee-Tahoe, to name a few. 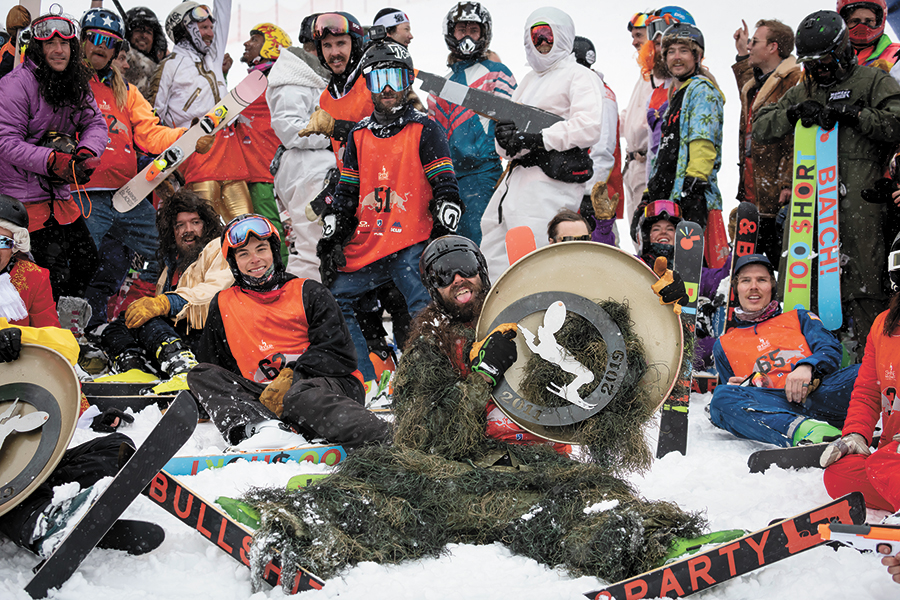 Alongside his concern for the world around him, Shane was concerned for his loved ones, too. He was famous for pursuing fun and adventure in all he did. He encouraged his friends, rather than competing against them, urging then to be the best athletes they could be and join alongside him on the Red Bull team.

Today, she sees the beauty created by Shane’s legacy, which has now turned its focus primarily to the Shane McConkey Eco Challenge. It’s a youth call to action to raise global climate awareness, and something about which their daughter Ayla is also passionately outspoken.

“We’re always going to have tragedy no matter what, so rather than sit in sorrow, try to just see the beauty, and something beautiful is going to come out of death no matter what,” Sherry says. “It’s like the lotus. You can be in the mud for so long, and that beautiful flower emerges. It’s hard to know it when you’re in it, but years later you see it.”

From the Depths of Sadness They Rise
Sports & Outdoors / Wellness