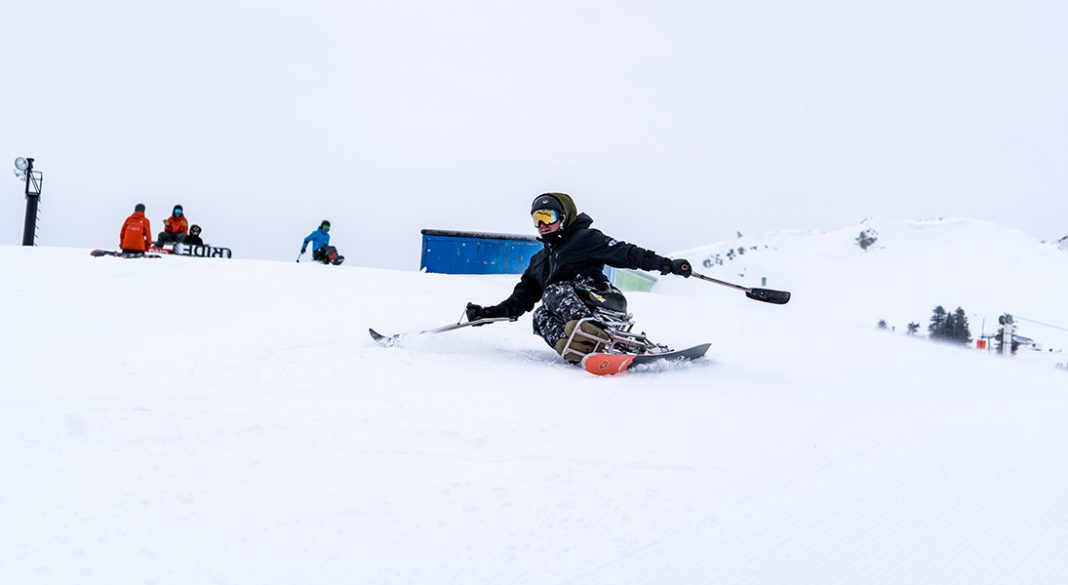 Before dropping in, former Air Force Master Sgt. Shay Hampton takes a minute at the top of Squaw Valley’s Gold Coast lift to delve into the challenges of his past, present, and future.

His reflection touches on the value of forgiveness of self and others, derived from his faith and the teachings of the Bible. He tells me he finds it unfortunate that some of his fellow veterans have taken to substances to deal with the darker memories of war, when he believes mountains and exercise do a much better job. He tells of his 2012 brain surgery, during which part of his skull was removed, and how that left him with cognitive, speech, balance, and memory issues, along with partial paralysis on the left side of his body.

He discusses his traumatic brain injury, spinal cord injury, and severe PTSD, sustained from combat operations in Iraq. He easily segues into how beautiful the day is, and his appreciation for skiing, family, and friends

Then, almost on cue with a splash of comic relief, comes a ski patroller named Plex, a good friend of Hampton’s, saying: “Move out of the way sir! You can’t just stand there! GET. OUT. OF. THE. WAY!”

The two laugh, hug, ask about each others’ families, and exchange warm holiday wishes. Then, back to jokes and ribbing.

“So, how the heck was your 115th surgery?” asks Plex, who can’t stop cracking up.

The actual number of his surgeries, 38, is no less astounding. Just in August, Hampton had his third surgery on his right shoulder and bicep. Due to that operation — and a host of other reasons — Hampton skis mellow groomers, with the aid of outrigger skis on his poles to help with balance. He makes clean, controlled turns on a day when the snow is cold and edge-able.

Though his world is filled with all types of hardship, Hampton remains ruthlessly positive and is one person among a percentage of combat-injured veterans who consider themselves lucky to have skiing as an outlet. “The mountains and skiing have showed me so much, and given me so much,” he says.

Hampton was able to get back (he was a snowboarder before his injuries) to sliding down snow through a program called Military to the Mountains (M2M), spearheaded by Truckee-based nonprofit High Fives, in 2016. M2M is a local example of a growing number of ways to get veterans outside and skiing. National programs like the Wounded Warrior Project, Disabled Sports USA, and other local entities are involved in similar missions.

M2M takes two groups of vets — one in Dallas, Texas, and one in Reno, Nevada — and trains them as a group for nine weeks in their respective locations before a week of skiing at Squaw. (Ten weeks is the length of Army boot camp, and this training was designed with that in mind.) The total number of participants in the program is 22, chosen to honor and bring awareness to the number of veterans estimated to commit suicide every day.

For Roy Tuscany, founder of High Fives, the community and the people create the most lasting impact, with the skiing being the icing on the cake.

“Each of these veterans, over the weeks in the program, they’ve developed relationships, and bonds, and have become best friends, brothers, sisters, folks that are so close to you,” Tuscany says. “Some of the friendships I’ve grown with these participants have blown my mind.”

Josh Sager is a past participant of M2M who lives near Dallas, Texas, and was introduced to the program via the Adaptive Training Center, a gym in that state. An experienced snowboarder who had ridden in Alaska’s backcountry, he wasn’t sure if he would ever have the chance to ride again following a 2015 parachute failure in which fell about 40 feet from the sky. “I shattered my lower body, broke both my hips, and had a traumatic brain injury,” he recalls.

Via the gym in Texas, which is a partner of High Fives, he realized there was a path to getting back on the slopes and followed it — although it wasn’t without doubt. “At the time, I was in a dark place. I had just gotten forcibly retired for being hurt … M2M was number one the shining light that brought me back,” Sager says. “I tell people all the time that it saved my life.”

He echoes Tuscany on the importance of the community aspect, which gives him more than even his deep love for the sport itself. “Being able to be with guys that have been through the same stuff I’d been through is the most beneficial part of it all,” he says. “When you’re dealing with your injury and basically getting pushed out of the military, you’re thinking, ‘man, nobody is going through what I’m going through.’”

Myriad challenges like this exist for combat injured veterans going skiing. Achieve Tahoe, based at Alpine Meadows, is partners with the program and provides much of the specialized equipment participants need.

Tuscany says that several members of M2M have not only never skied, but have never seen snow until they drive into the Tahoe Basin. Therefore, their mentality, bred tough from the military, remains geared toward a different type of success compared with a performance-focused skier.

“They’re not so concerned with how pretty their turns look, but to them, to be able to get up the mountain and down, that’s conquering the mountain — and that’s success,” Tuscany says.

Following his own participation in M2M, Hampton was asked to be a mentor for the 2020 program, an opportunity he gratefully accepted. He is ebullient to be able to pass on the benefits he h as felt from the mountains and from M2M to the incoming group.

“There is a level of trust that these guys have to go through when getting involved in M2M,” Hampton says of getting some participants out of their shells, but he is looking forward to fostering more relationships and says that all participants have a downright blast overall.

In the meantime, before the program starts in March, he will be following doctor’s orders to stay safe whilst improving his skill set on the slopes. After our run with Plex, the ski patroller tells Hampton he’s looking good on skis, but offers some words of wisdom, of sorts.

“I saw you eyeing that jump in the middle of the run,” says Plex. “That jump had no landing. When you’re ready to start jumping, you come talk to me. I’ll find you some great airs with good transition.”

From Service to Slopes
Music
6:00 pm

From Service to Slopes
Music
6:00 pm

From Service to Slopes
Music