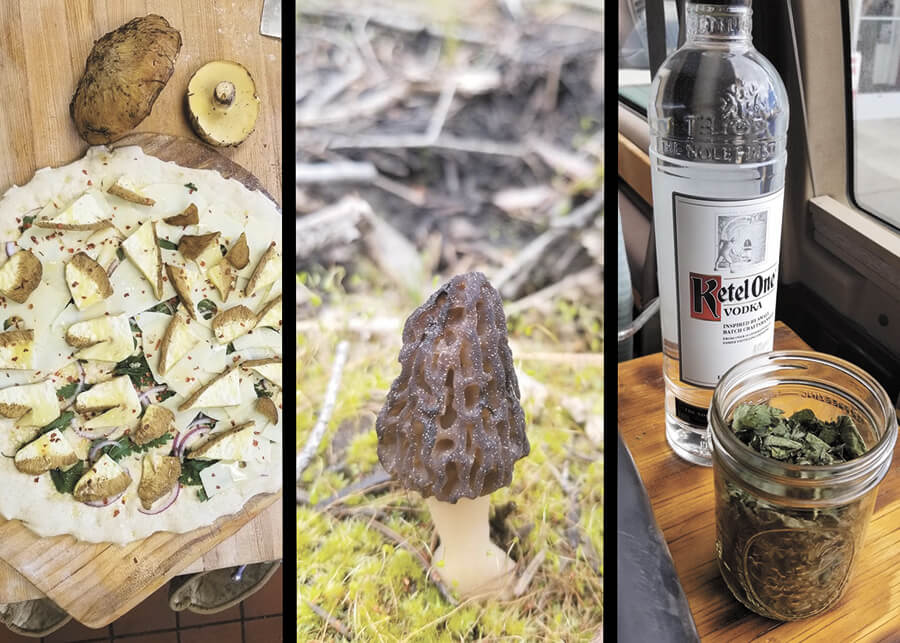 It’s hard not to think of Michael Pollan when writing an article on edible plants. His 2006 New York Times bestselling book The Omnivore’s Dilemma put him on the famous journalist-foodie map, delving into everything Pollan grew, foraged, and hunted himself. In the conclusion, he calls his meal made with all local ingredients “the perfect meal.”

In the Sierra, our own investigator of wild food is local resident Christopher Miller, a self-titled “wild forager enthusiast.” Chris says of his passion for food: “I learned about wild foraging as a young boy on guided ranger hikes as well as in the Boy Scouts, but I got more into it in the last few years. Many of the local edibles I look for are nutrient dense, plus they connect me with the natural world.” A few of his favorites include morel and suillus mushrooms, stinging nettles, gooseberries, and thimbleberries.

When discussing mushrooms, there’s always a caveat: Do your research! Many mushrooms are poisonous, so research thoroughly. That said, Chris’ two favorite fungi are both safe and edible.

Morels are often the easiest ones to find because of their brain-like appearance, which looks like pitted worm paths; They’re shaped like little gnomes with pointy hats. Chris finds them around Tahoe’s West Shore, and they’re also known to grow near Forest Service Road 06. Interestingly, there is a specific way to cut the morel so that they can grow back: Cut the mushroom close to the ground with a knife or scissors, but be sure to leave the bottom portion in the ground. Morels love forest fires and pop up about a year after a burn, in the spring. They can also grow “as big as a softball with the stem and cap,” Chris says, recalling the largest morel he once found.

To prepare morels for a meal: Cut the morel lengthwise, at which point you’ll discover they’re hollow inside. One of Chris’ favorite ‘au natural’ dishes is a morel and stinging nettle pizza (with garlic, of course). Other ways to prepare the mushroom are to dehydrate thick pieces to use later, sauté in olive oil, or simply grill. If eaten raw, they’ll upset your stomach, he says.

The suillus mushroom (Order: Boletalus) can be found in the springtime at the backside of Stampede Reservoir or in Tahoe Vista, and is almost always found under a pile of pine needles under a pine tree. Also known to be a relative to the porcini mushroom (so you can cook suillus like you would a porcini), the large meaty cap looks like a golden grilled hamburger bun. Instead of gills, the suillus has pores on the underside of its cap, like a sponge. Before cooking, peel off the top skin, as it is less digestible. (The sticky or slimy top is usually covered with pine needles anyway.) Chris also cautions if you bruise the suillus by poking or smashing it, and see it turn blue (the “bolete rule”), do not eat it! Again, do your research!

On to stinging nettles, which do, in fact sting! Brush up against one and you’ll feel the sting and the heat. The cause? When you disturb the leaf, the fine hairs have tips that breaks off. Exposing the tip, the plant acts like a needle filled with chemicals that shoot out and sting, a defense mechanism from predators.

Chris likens the nettle to spinach and says it’s just as easy to cook: just wear gloves to pick the plant and boil or sauté. It has a sweet flavor. According to BBC Nature, nettles “contain more iron than spinach and are a rich source of vitamin C.” The plant is also used in a tea for medicinal purposes, such as arthritis and rheumatism. Another tidbit: “The stem is stringy and has been used as cordage.” Sure enough, you can watch videos on making rope from this plant. The nettle can be foraged in the spring and early summer, can grow up to three feet tall, and in our area is found along the Truckee River, particularly under the bypass along the Legacy Trail.

Speaking of spiky plants, how about the green gooseberry with its intimidating thorny projectiles? Chris’ method of dealing with the gooseberry involves peeling open the berry with gloves and blanching them in water, the spines becoming limp. You can alternatively boil the berries, smash them, strain them through cheesecloth thereby separating the thorns, and make the gooseberry mush into a jam (sweet-tart flavor). These can be found throughout Tahoe.

Lastly, thimbleberry, named after the berry that looks like those little indentations on a thimble, is an easily identifiable plant with its large, broad, furry, five-lobed leaves (each leaf the size of a hand), white flowers that look slightly crinkled, and small red raspberry-looking berries. Like the gooseberry, the thimbleberry makes a good jam, even as it’s tart.

Mushroom and nettle pizza for dinner, toast with homemade jam, and a gooseberry pie for dessert. Could be another “perfect meal.”