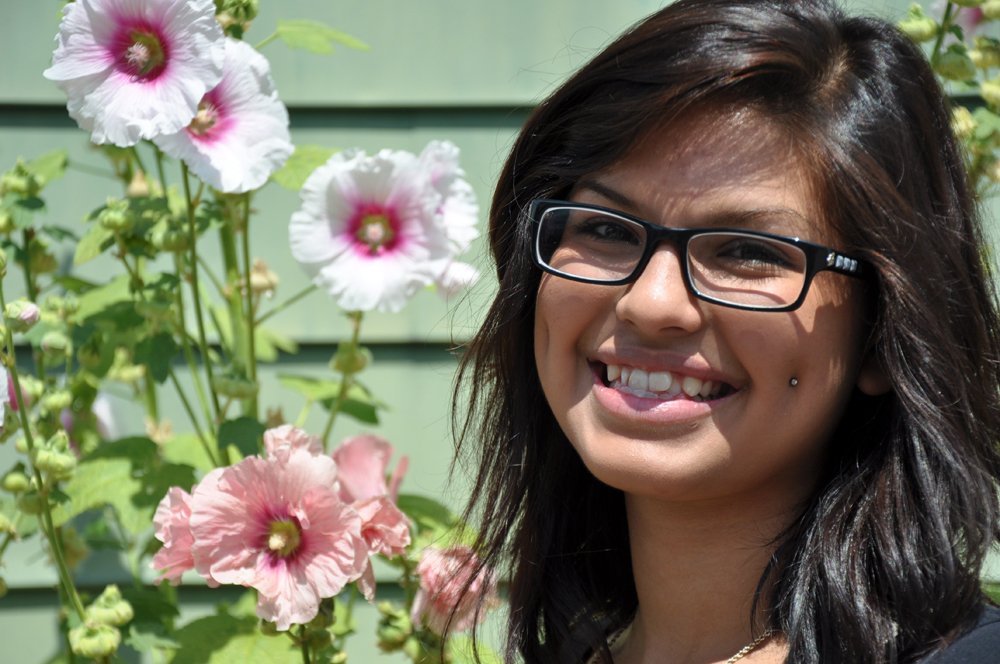 Violinist Mirna Mejia, 18, from Truckee, sometimes falls asleep to the swirling sensation of 19th century Czech composer Friedrich Smetana’s classical piece “The Moldau.” She had played the piece in the Reno Philharmonic’s Youth Symphony Orchestra. “It’s based on a river,” she said, “how it flows through happy moments and grave moments, but keeps going.”

I listened to “The Moldau” after listening to Mirna’s story, and I think Mirna is like the river. No matter how challenging or cheerful her days are, she keeps going, staying committed to a better life with more opportunities.

The violin has been her most important companion on that path.

When Mirna was 9, her mom, who left Mexico for America to give herself more opportunities, demanded that she and her sister play instruments so they could “do something with their lives.” They didn’t play sports and they didn’t have enough resources for other activities, so her sister Brenda played percussion and Mirna played the violin. Like her mariachi-singing grandfather, Mirna loved music. But after graduating from Tahoe Music Festival’s Truckee Tahoe Youth Music Program, which is only offered in elementary school, she didn’t have a teacher anymore — until she met Truckee music teacher Liz Glatty.

Mirna said her family didn’t have money for private lessons, so Liz, who graduated from the University of Southern California in violin performance and used to play for the Sacramento Symphony, gave Mirna free lessons for years.

When Mirna was 12, her mom and dad thought about returning to Mexico, so Liz offered to adopt Mirna. Although her parents ended up staying in the U.S., Liz’s idea moved Mirna. “I love Liz,” Mirna said. “It’s really nice to know someone cares about you and is willing to keep you.”

Mirna wishes her other friends cared about important things. “I try to inspire them to do anything, but it doesn’t seem to rub off. They are make-up obsessed, young, and careless. They don’t think about long-term things.”

Mirna’s music has helped her focus and has given her experiences she’ll never forget: She has volunteered teaching young kids violin; she played with Reno Philharmonic’s Youth Symphony Orchestra at the famous Disney Hall in Los Angeles in 2011; and the next year she won a $1,000 academic scholarship from the Reno Philharmonic, which was as much as she earned in six weeks working at Taco Bell, her job at the time.

But really, she says, the music is for her. “I just drift away when I play. I don’t think of anything else. I just think about the music. Music is something I can’t imagine not doing.”

Because of her talent, I was shocked when Mirna said she has never had a high-quality violin. She has borrowed, rented, and bought one she could afford with her aunt in Mexico. Once, her uncle found an old Czech violin, but the man restoring it ruined it.

I was confused. I thought, “Doesn’t a good violinist have to have a good violin?” But as she kept talking, I realized I was entirely wrong. Mirna says that the violin itself doesn’t matter; it’s the fact that she can play it beautifully that counts.

You see, I just got a new violin. I tried dozens of them before I found the one. It’s Polish and, thanks to my grandparents’ financial help, it’s really nice. I thought it made me sound good. But now I see things differently. I know from Mirna that even though my violin is exceptional on its own, it’s my playing that matters. Like Mirna, if I practice hard and love it sincerely, I make it sound beautiful.

Mirna inspired me to change my perspective on something I’ve done for six years, so I asked who inspired her.

She said she’d been asked that question before. She waited a few seconds and then said, “I feel like you have to live up to your own standards and not compare yourself to anyone else.”

A recent graduate from Truckee High, Mirna is the first person in her family to graduate from high school and the first to go to college. Mirna now attends California State University Channel Islands in Camarillo, 20 minutes away from her grandpa. She wants to be an ob-gyn. And to pay for classes, she’ll teach violin.

No matter what she does or where she goes, I imagine the violin will always be part of her flow.

Following the Music
8:00 am

Following the Music
Community
12:00 am