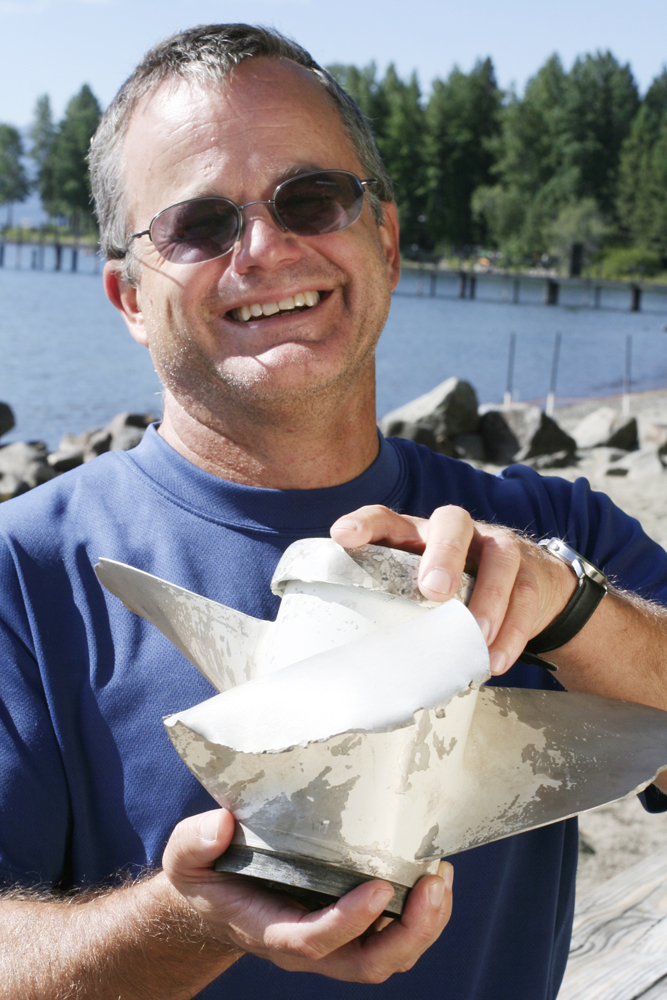 As I left school after the first day of my sophomore year at Tahoe-Truckee High School, I certainly had no idea that I wouldn’t return for three months. Or that it would be two weeks before I spent a night in my own bed. I was focused on keeping summer alive by going waterskiing with some friends. A near death experience wasn’t part of my afternoon plans.

Waiting at the end of the Dollar Point pier that calm and warm September afternoon in 1973, I kept wondering what was taking my friends so long. Just before I gave up and went home, I finally saw Chris’s boat heading my way. (My friends in the boat that day were heroes to me, but I believe they’d like to remain anonymous.) It was my first time in his Boston Whaler, and I wasn’t sure where to sit since there were four of us and the only seat was for the driver. After a while I got sick of watching Chris skiing as I bounced around on the floor of the boat, so I moved to the front and sat my butt down on the bow. I will admit to doing a lot of stupid things in my life, but this just might be the worst. The lake was like a sheet of glass that afternoon, a glorious day to be waterskiing. It seemed like we were the only boat on the water, but we weren’t. A wave from another boat hit us, and I went flying into the lake.

As Chris’s boat roared over me at 30 miles per hour, time slowed to a crawl. I saw sunlight through clear water, then the dark shadow of the boat followed by bubbles, lots and lots of bubbles, and then blue sky. My first thought as the boat sped away was: “Did they see me fall out?” My next thought, “Why is my leg floating around at a weird angle?” Then I saw the horrific gash. I felt no pain, but as my friends gently hauled me back into the boat I heard someone say, “Don’t let him see his leg.” My reply: “I already did.”

Since my knee had put a nasty bend into one of the propeller blades, it took longer than it should have for the old Whaler to speed to Commons Beach. After we arrived, I was put into an ambulance and rushed to Tahoe Forest Hospital. A few years ago, I asked Steve Swigard, who had recently retired from a long stint with the North Tahoe Fire Department, if he remembers any special rescues he was involved in. He said, “Well, I do remember putting pressure on your femoral artery on the way to the hospital to keep you from bleeding to death.” Since I had no idea he had done that, or was even in the ambulance, I finally had the opportunity to say, “Um…thanks.”

As my ambulance sped off, my friend Glenn ran up to my parents’ office in Tahoe City to inform them that I had been in a boating accident and that I was on my way to the hospital. Now that I am a parent, I can visualize the angst of their drive to Truckee, wondering whether their son was dead or just missing a leg. In Truckee, I was put in another ambulance and shuttled off to Reno. While I’m sure my parents were freaking out, I was living a more simple life. I was dazed enough to feel no pain, but still had enough of my wits about me to be flirting with the cute nurse in the ambulance.

Once in Reno, I was dashed off to surgery and, the next thing I knew, I was beginning a two-week stay at Washoe Medical Center with an IV in my arm, my leg in a cast, and the first vestiges of pain starting to arrive. At the time I thought I was pretty unlucky to have fallen off the boat, but a steady stream of Tahoe visitors set me straight by pointing out that I still had my leg (and my head).

A few days later, just about the time the joys of hospital hospitality were getting stale, a humongous card arrived from Tahoe Lake School, signed by all the students, then another enormous one arrived from Tahoe-Truckee High School. Once again, North Tahoe had reached out a hand of support and encouragement to somebody in a time of need. Whether it is to assist the family of a child fighting cancer or to help an accident victim recover, our small town has always stepped up to the plate and provided support when it’s needed. It was wonderful to feel that support, and of course embarrassing, because apparently now everybody knew that I was that idiot who fell off a boat and nearly killed himself.

After Christmas, I hobbled back to Tahoe-Truckee High. A few times a week after school was out, I would walk the mile from school to the hospital for physical therapy and then hitchhike back to Tahoe City. Just about the time I was feeling almost normal in the early spring, the doctors decided that I needed to go in for another surgery so they could loosen up all the scar tissue that was preventing my knee from bending properly. My parents, apparently feeling that no good anesthesia should go unused, thought they might as well remove a few pesky moles from my face as well while I was under. A few days later I was back on crutches with bandages on my face and folks snickering, “Geez, what the hell happened to him this time?”

About 10 years ago, I heard on the local news that a woman’s knee had been cut by a boat propeller. Thinking I could provide emotional support, I called the hospital in South Shore and left a message for her to give me a ring when she felt like she needed to talk to someone. A few days later she called and we were having a fine conversation until I said, “It took a while, but now I go on 15-mile hikes.” There was a lengthy pause and then she said. “Oh…you still have your leg?” Oops. Yes, I still have my leg. Thirty-nine years later it is covered in scars and aches with arthritis. A recent X-ray still shows the holes where the bolts had been screwed through to hold it together. But I have my leg, and it works just fine. It’s just my putting my foot in my mouth that’s the problem.

~ Tim Hauserman wrote the guidebook to The Tahoe Rim Trail, the third edition of which was just published. He still cringes when he sees anybody sitting on the front of a boat. Comment on this column below.

First Thing Is, Stay In The Boat
Arts & Culture
All Day

First Thing Is, Stay In The Boat
Sports & Outdoors / Wellness