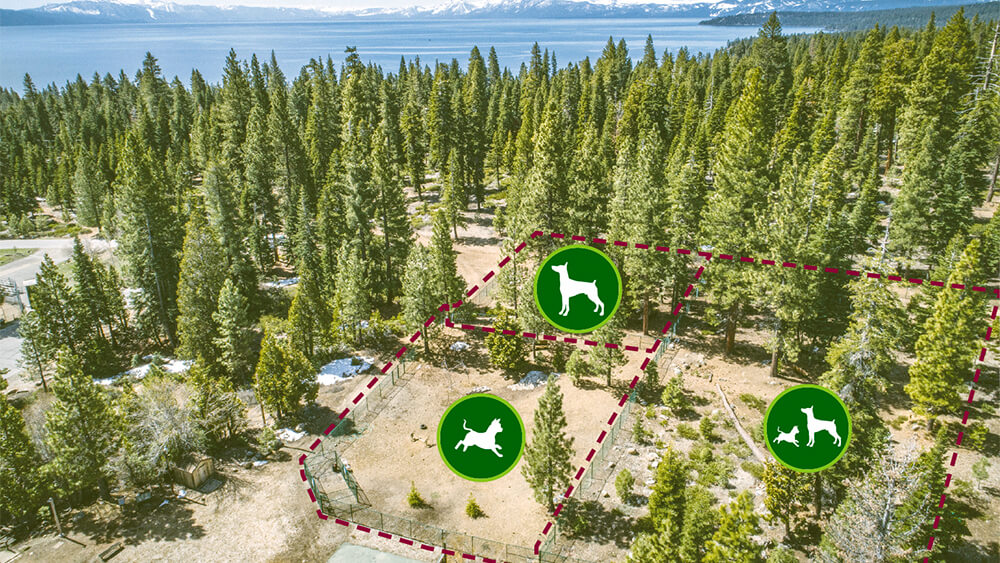 Tahoe is a dog paradise — a 36.15 cubic mile swimming pool and tons of space to roam certainly keep the four-leggeds happy. But the Truckee/North Tahoe area is also dotted with National Park land and divided into several jurisdictions with leash laws.

While many Tahoe-ites tend toward “let the dogs run free,” 44-year Tahoe Vista resident and top dog at Tahoe Unleashed dog park Pam Berger said leash laws aren’t all based around negativity, and this is an area where we need to reframe our thinking for modern times.

Although Placer, Nevada, and Washoe counties require dogs to be on-leash, Berger says that leash laws are more of a “safety issue” for all, including wildlife, humans, and dogs themselves. And, that the common conception that an off-leash dog is more obedient is incorrect.

In a previous Moonshine column, when asked about recent leash law enforcement at Donner Lake, California State Park Ranger Brad Chesire said that introduction of dogs and other animals into protected areas can change the ecosystem (see our November edition of You Asked. They Answered.).
Berger agrees. “No dog in the Tahoe Basin is safe off-leash with our wildlife, nor is our wildlife necessarily safe with our dogs off-leash,” she said, “so the solution is to build a dog park.”

Berger spearheaded Dog Day In The Park, a nonprofit whose board partnerered with North Tahoe PUD to build Tahoe Unleashed dog park. The idea was conceptualized in 2012, and the group raised $80,000. The park was eventually built in 2016 on NTPUD land.

The features, size, and location of the park were carefully researched. And in her explorations, Berger found that many dogs don’t learn socialization off leash in the open. Other dogs have leash agression, so they don’t become socialized meeting other canines on a leash. Another motivation was to cater to dog owners with special needs.

“We have an aging population. We need a safe place for our seniors to take their dogs so their dogs can play. They can’t run after a dog. Small children like to play with their dogs in a safe environment,” she said, adding that the park has recieved an overwhelmingly positive response.

Tahoe Vista resident Steve Lathrop takes Terra (a six-month-old lab mix with tons of energy) to the Regional Park daily. “We make the circuit of the regional park and then at the end of the walk we come in here to see if there are any other dogs to play with. She wouldn’t get socialized if it was just her and me together,” he said.

Berger emphasized a project like this would not have been possible without the support of NTPUD staff and its board. Because of them, there was land to build the nearly 2-acre park on, and a maintenance team, greatly reducing the required budget. Without the partnership, realization of the park would have been “cost prohibitive.” In addition, local businesses donated materials and financial support, such as Tholl fence, who discounted materials by approximately $8,000. In Truckee, residents are coming together to build a park much like Tahoe Unleashed, and Berger hopes to see another public partnership happen with this project as well.

Nova Lance Seghi is the co-director of Truckee Dog Park, with a board consisting of residents who are working to create a park in Truckee, partnering with Truckee-Donner Recreation and Park District.

The Town of Truckee has its own guidelines: there is an “at large prohibited ordinance,” which means that you must have both immediate voice and visual control over your dog, but the only locations in Truckee with strict leash laws are Truckee Regional Park between May and October, and Donner State Park.

Seghi isn’t trying to change this, but instead is looking to provide an additional outlet. “We love all the wonderful off-leash and outdoor things we do with our dogs. We’re still gonna hike [and] ski with our dogs. This is another option,” she said.

In 2016, she adopted a husky mix who could not be let off-leash until he learned to come when called. This got her thinking about creating a dog park. She also considered the elderly and disabled population, who need a safe place for their dogs to play, and the social benefits for humans and canines of having a dog park.

Truckee Dog Park is currently examining three proposed sites, one in the regional park, another bordered by the Truckee Bike Park, Joerger Drive, and Highway 267, and a third near the old town yard off Riverview Drive. A main focus is to find a site where the park can be built around natural features, such as trees to provide shade.

The park would include separate areas for small and large dogs, a double-gated entry system, 8-foot and 6-foot fencing for each area respectively, seating, play structures, dog waste stations, a cooling station, a dog wash station, and more, and would be operated year-round.

In 2017, the group opened a fund with the Tahoe Truckee Community Foundation, where donors can now make tax-deductible contributions. The project will be completed in phases, the first of which is expected to cost about $35,000. Seghi hopes a park site will be selected and its design finalized by the end of 2018, with phase one construction to begin in 2019.

Pam Berger is optimistic about the project. In creating Dog Day in The Park, the mission was not just to create one, but many dog parks in Tahoe. Although they aren’t partners in the Truckee project, she wishes Seghi the best, and has shared her experiences from building Tahoe Unleashed.

“I do think Truckee needs a dog park. Our mission statement [is] to build dog parks, besides supporting the safety and welfare of all the animals … so I certainly hope she is successful. I really do, because I think we need it,” Berger said.

A Dog Park for Truckee