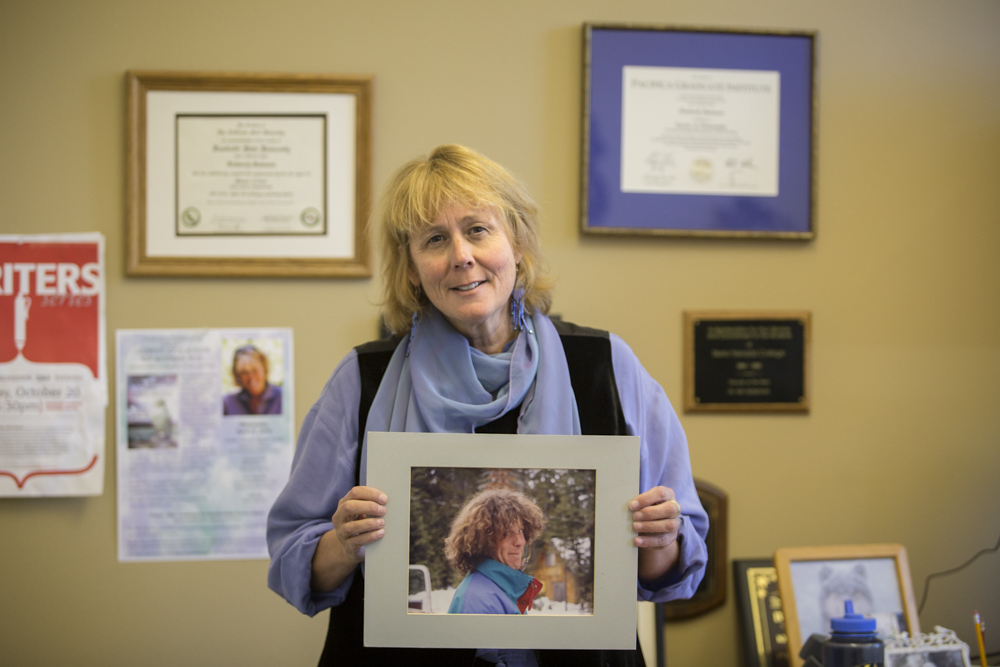 For Kim Bateman, the impetus to begin writing Crossing the Owl’s Bridge: A Guide For Grieving People Who Still Love was the tragic death of her 22-year-old brother in a skiing accident in 1990. “One day he was there and the next moment his body is at the bottom of a 750-foot cliff with all his bones broken and he is gone and he is not coming back,” Bateman said. “He was a poet and a lover and a comedian and a musician. When Chad died, it felt like someone had cut off one of my arms. But intense pain leads to intense creativity.”

What helped her finish the task of writing her book was another death: Her close friend Elizabeth Hathaway, a fellow writer who, before she died in 2015, told Bateman her biggest regret was that she hadn’t written her book.

Bateman had been working on Crossing the Owl’s Bridge since 2004, but it took the passing of Hathaway to get her over the hump of completing it. Bateman says it was like the Japanese proverb, “My barn having burned to the ground, I can now see the moon.” She could now see that her role was to help others deal with the kind of grief she faced.

“So many people are in so much pain when someone dies, and nobody knows what to say. And something is really backwards in our paradigms,” Bateman said. “We say ‘you need to get over it and move on.’ And really the ancients and many religions and our own imaginations teach us that our loved ones become psychologically more present when they have passed.”

Bateman has been teaching death and dying classes for 20 years at Sierra College, where she is also the dean of the Truckee campus. She has spoken numerous times about grieving at public gatherings after the death of someone in our community. Her presentation after the death of Tahoe Cross Country Ski Area Manager Kevin Murnane two years ago helped me process the death of a close friend.

Crossing the Owl’s Bridge uses 12 folk tales and 32 personal stories. Her goal was to “connect the mythic with the personal, to tell us what to do next,” Bateman said. The folk tales “connect us to the universal commonality of feeling” that comes with the loss of a loved one.

The book focuses on the phases people go through after loss. The first phase after the death of a loved one is initiation. You are drop-kicked into this journey. “Our normal navigational tools don’t work; we look externally for a way to solve the problem,” she said.

Then you look internally when you realize, “It is your deal to figure out.” This is when many grievers reach what she calls the abyss — the low point that some feel they will never recover from.

“Something speaks to them and they are called to do something,” Bateman said. This might be working to prevent suicide or helping to encourage organ donations. Bateman says that in Japan, after the devastating 2011 tsunami, a man found his method of doing something positive was to put up a telephone booth where people could go to ‘talk’ to their relatives who had passed.

One important way of emerging from the abyss is to talk to other people about your experience. In Bateman’s death and dying class the students come to her house for dinner one night of the semester. I recently went to this event and watched as 27 students of all ages listened to four mothers tell their stories of losing four sons.

Bateman said that some of these parents have been speaking to the class for over 15 years and what they emphasize in the story has changed over the years. Initially their focus was on the horror of the events, but now they talk more about who their children were, and why they are still in their heart.

She doesn’t like to talk about recovery or getting better. It is a process of advancing from one state to the next and learning how to live your life. Through her work, Bateman hopes that readers find validation for their experiences. She wants grievers to be shown examples of people who creatively find a way to keep a connection with their loved ones.  In doing this they can learn to move on to the next phase of their lives, while still loving and feeling the person who has left them.

“Holidays, birthdays, and anniversaries of the death can be particularly difficult and we may find ourselves back in the rawness of that original pain,” Bateman said. “Though it hits us with intensity, if we sit with the discomfort we will find that at the source of all that is love and the love doesn’t end. If anything, it grows.”

Kim Bateman’s suggestions for helping someone who is grieving

The Do’s and Don’ts of Comfort

• Don’t say, “If you need anything, give me a call.” No one will ever call you. They are not in a place where they can act. Say, “I will come over and walk your dog. I can get groceries. I can do errands.”

• Never start a sentence with “at least” or “everything happens for a reason.” You can’t make it logical.
Remember, the most important thing is your presence. Bateman tells a story about a mother who watched as her son walked into the neighboring yard and sat next to an older gentleman who had just lost his wife. The boy stayed there for quite some time and when he returned his mother asked, “What did you say to the man?” The child responded, “Oh, I didn’t say anything. I was just helping him cry.”