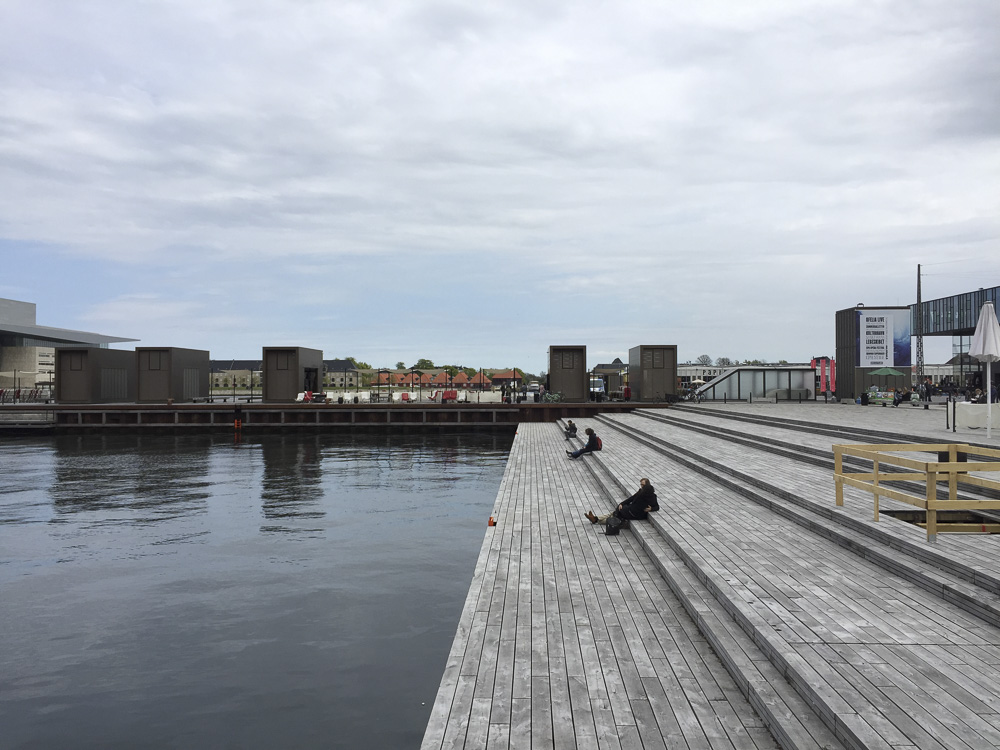 Crowded bike paths line every street. Large parks dot every block. Grassy knolls, basketball courts, and public gardens flood the gaps between buildings, overflowing into every conceivable space of roadside to shape the contours of the city. Beyond the dense, colorful apartments of Copenhagen’s downtown and the famous Nyhavn canal district, this explosion of green and open space endows the Scandinavian city with its characteristic tranquility. It feels strangely familiar, yet inherently foreign, like a small town scaled up to city proportions.

Denmark is consistently ranked one of the happiest countries in the UN’s World Happiness Report, and its urban planning likely plays a role in that: there is plenty of evidence supporting the positive health benefits of outdoor recreation and green space. Likewise, the effects of community and interpersonal interaction — facilitated by the plentiful public space in and around Copenhagen — are boons to health and happiness. Copenhagen’s design, with its immaculately kept parks and communal spaces, encourages both outdoor recreation and social relationships.

Even the city’s biggest attractions double as public space. The spacious Assistens Kirkegard could easily be mistaken for a park. Only after admiring the large trees and blooming spring flowers did I notice the scattered gravestones, giving away the true nature of this urban space. Similarly, the Kastellet (Danish for citadel) is as much an event space and walking park as it is a 400-year-old fortress. The grounds of the Rosenborg Castle, home of the Danish throne and the crown jewels, feature a botanical garden and large park. The famous Tivoli Gardens is a large amusement park situated in the city center frequented by locals and tourists alike for thrill rides, carnival games, and weekend fireworks.

The less renowned Dyrehavsbakken, the oldest operational amusement park in the world, is a local favorite. Located a short 20-minute train ride from the city, Bakken, as it’s more commonly known, is surrounded by 11 square kilometers of deer-filled forest, which once served as the royal family’s hunting grounds. A veritable nature park only a few train stops from a major metropolitan area, Bakken exemplifies the high esteem the Danish hold for shared green space.

One effect of all this public space is that Copenhagen is quiet, adding to its small town feeling. All the open areas in Copenhagen serve to create a buffer between residents, roads, and noise. Downtown, just a few blocks from the city’s busiest streets, I heard little aside from the occasional car passing and the low conversation emanating from a nearby cafe. The result is a sense of peace and tranquility that is rare for urban expanses.

The appreciation for communal space extends even to the architecture and lifestyle in Copenhagen. The vibrantly hued apartments often have gardens and courtyards by the entrances, facilitating interactions between residents. One common housing style features two rows of identical clay-roofed apartment blocks, with each individual apartment opening into a shared common space. As an outside observer, it seemed to me the residents were much more familiar with each other than the average American city dweller is with their neighbors. Even restaurants encourage this ideal of outdoor interaction, frequently offering blankets to patrons so they can sit outside to chat with each other in the brisk Scandinavian air.

Nowhere is this communal lifestyle more apparent than in the renegade hippie district of Freetown Christiania. Once military barracks, the area was abandoned after World War II. In the years following, hippies, bohemians, and squatters began occupying the space, proclaiming it an autonomous district in 1971. Despite various tensions with the Danish government over the years, Christiania has flourished as a self-governing, communal social experiment. Today, the many art studios, artisanal shops, and, yes, marijuana pushers, reside in self-maintained houses and huts scattered throughout the woods and riverbanks, connected by dirt paths and narrow pedestrian streets. It is a unique approach to collective living that emphasizes natural spaces. Like many places in Copenhagen, Freetown feels contradictory to the Western capitalist ideal to maximize the use of all urban space for economic growth.

Walking around the city, especially on a warm Saturday afternoon, reveals not only how much public space there is, but also how well it is used. In one of the many parks of the hipster neighborhood Nørrebro — this one lining a popular bike path, wedged between a road and a city block of houses — I observed large groups barbecuing on permanent grills. A group of young men played a casual drinking game with a frisbee, children played soccer in a nearby field, three young girls set up a tent under the supervision of a father figure, and many more people wandered about enjoying the sunshine in their own ways. In another setting, it could have been mistaken for a music festival. But this was just a sunny weekend in Copenhagen.

This type of outdoor recreation is ubiquitous. Runners and bikers are everywhere, from the busy streets of Nyhavn to the quiet forests of Bakken. One small park, tucked alongside a major road, even had a ping pong table where people had brought their own paddles and balls to play. Whether it’s an elderly man fishing in one of the city’s canals or a group yoga class in the park, it seems that everyone has a hobby or activity in which to take part.

And for those that don’t, there is no shortage of events. Crossing into the Kastellet grounds, I found the unexpected surprise of an antique car show, featuring not only Oldsmobiles and Coupe de Villes, but food stands and live music as well. Elsewhere were posters advertising an upcoming metal music festival. Restaurants throughout the city were celebrating Beer Week. Certainly, many cities have activities and events, but Copenhagen feels built around them.

Of course, much of what makes Denmark — and the rest of Scandinavia — so happy and healthy is not replicable throughout the world. Ambitious social welfare policy (and the accompanying tax rate) is not politically viable in many countries. It is much easier to tailor socioeconomic policy to a small homogeneous population like Denmark’s than to a sprawling, diverse country. But there is still plenty to be learned from Denmark and Copenhagen’s public spaces. Crafting environments that encourage outdoor activity and foster communal interaction are essential to public well-being and maintaining a strong social fabric.

Here in Truckee, we are fortunate to enjoy a small town culture that promotes close social ties and an incredible natural environment that allows for all kinds of outdoor recreation. However, as our community expands and encounters the inevitable strains of growth, we would do well to learn from Copenhagen and its active promotion of recreation and human interaction. People respond to their environments, and the environment in Truckee/Tahoe, much like Copenhagen, encourages a healthy and happy lifestyle. Let’s keep it that way.