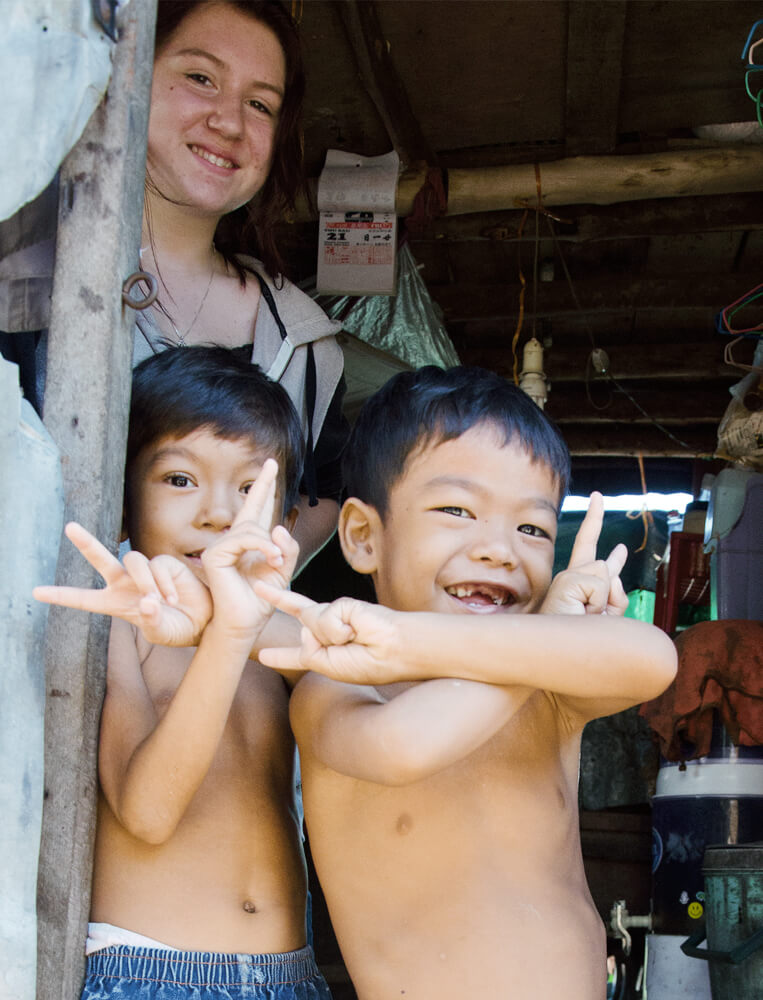 Frances
I connected to Beethoven’s “Fifth Symphony” by deciding to learn it, studying it, and listening to my piano teacher’s advice. But I get closest to the piece by playing it. When I play it, I feel closer to what Beethoven was trying to tell me about sadness, frustration, tiredness, and how to turn all those feelings into power.

Fiona McMains, a 16-year-old Truckee High student, connected to Cambodia by reading books, listening to her dad’s travel stories, taking her parents’ advice on giving to the world, and by being open to traveling there this summer. But she connected deepest by going.

During the eight days Fiona was in Cambodia, she connected to the country “person-by-person.” She “wanted to be a local, not a tourist,” she said. Helping her dad, Doug McMains, create a video for 100 Friends, an organization that gives money to poor people in developing countries, Fiona felt love, sadness, and frustration for the Cambodian people, and eventually turned those feelings into power.

One day, as Fiona walked through a slum outside of Phnom Penh, where kids peeked out from doorless houses, a 3-year-old grabbed Fiona’s hand and led Fiona into her house. The poverty Fiona saw made her sad: dirt floors, a soccer ball made of plastic bags tied together with grass, and the story the girl’s father told about how his wife died from a disease because they couldn’t afford medicine.

“He even asked if we wanted water,” said Fiona. “They don’t have running water, just plastic bottles and wells miles away.”

Fiona feels frustrated by how much she has compared to her Cambodian friends. She has three pillows on her bed; they sleep on dirt. She has a closet of clothes; they wear mismatched pajamas and plastic shoes. She has ice cream in a freezer; most Cambodians don’t even have a refrigerator. Her house is nice; theirs is a shack. Her Truckee friends talk about the cars they will drive when they turn 16; a Cambodian child she met sells homemade bracelets to buy food for his family.

I would feel weighed down by what she witnessed, but Fiona isn’t tired or overwhelmed at all by her feelings. Instead, she used them to make a difference.

Fiona loves the family she met so much she “adopted” them by saving money to send them school supplies. She’s planning a gap year after high school to work in Cambodia. And she’s brainstorming ways to raise awareness about the poverty in the country.

Fiona always thought she would get a visual arts degree, up until recently. “My trip to Cambodia threw all that off,” she shared. “There are too many people in the world who need help.”

Eleanore
I love to rap. It’s funny, but true. My mom asked me a few days ago how I memorize all those words. I said, “I don’t memorize them. I listen to the music until it’s part of me.”

I feel like that’s how it is with Fiona. In Cambodia, she chose a raw and true experience by staying in locally owned hotels and going into the homes of the very poor. She soaked it all in, and now it’s a part of her.

But the difference between rapping and describing Cambodia is that with rapping you set the words free and let them fly into the ears of those who listen willingly; the audience feels and connects with the beat that carries those words. When Fiona tries to tell her story of Cambodia —the people, the problems, and how she wants to fix them — she says her friends connect, but from a distance.

“My new perspective just can’t be shared,” Fiona said. “It’s hard to explain to my friends about Cambodia because even with all the prep I did, I was taken aback.”

When she visited the Killing Fields Memorial, a monument dedicated to the thousands of Cambodians executed by the Khmer Rouge, Fiona was shaken when she saw skulls stacked three stories high — categorized into ages of the dead, from children to adults — which was especially intense after getting to know the Cambodian people. In the book “Never Fall Down” by Patricia McCormick, I read about a child prisoner who was forced to play music in the killing fields loudly enough to cover the sounds of the killing. Obviously, I felt sad. But from a distance.

We all need to connect to something. Fiona’s advice to us is to “get involved and stay involved.”

Maybe it’s not with Cambodia. Maybe it’s with music, sports, a place, family, philanthropy.
Whatever it is, decide to do something and make it a part of you until it’s begging to be shared.

~ For more information about 100 Kids, visit 100kids.org. Comment on this column below.

Connecting to Cambodia
Arts & Culture
12:00 am

Connecting to Cambodia
12:00 am