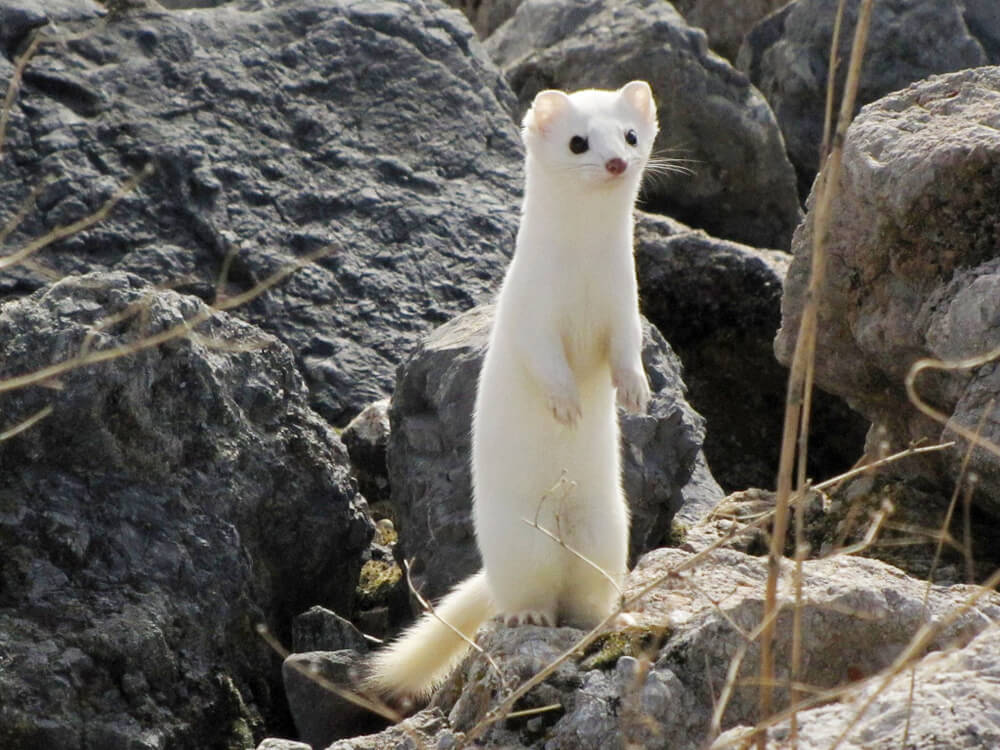 Camouflage is a pretty cool thing, especially when an animal actually changes its appearance to fit its environment, even transforming to assimilate to a particular season. Like winter. Turning white is the perfect solution to dupe predators when scurrying across large, exposed snow banks.

Turning white in winter is a physiological adaptation triggered by hormonal changes in response to seasonal signals, especially changes in day length, known as photoperiod. In the fall, as the days become shorter, animals molt their brown coats to grow white ones. Likewise, when the days grow longer in spring, brown replaces white. One may wonder in dry years such as this one if animals continue to do their white magic trick. According to a recent University of Montana study published in the Proceedings of the National Academy of Sciences, the timing and duration of color change is fixed for individuals; however, a proportion of hares are out of sync with their backgrounds. Climate change models predict reduced snow for the population, so they either need to evolve in a hurry or there will be large increases in mismatched (some white, some brown) hares.

The white-tailed ptarmigan, which looks similar to a grouse, is the smallest of the ptarmigans and turns pure white in winter except for its black bill and eyes. Will Richardson, co-director of Tahoe Institute for Natural Science, has observed these ptarmigans near Carson Pass in varying plumages, including pure white. In fact, ptarmigans have three molting periods and three distinct plumages over the course of the year. Males and females are on different schedules and their spring molts cover different portions of their body. In late fall, the birds turn white; in spring they have a molt that turns most of the head and neck feathers brown in males and most of the head and body brown in females (females trailing the males by about a month); and from July to September both genders molt more thoroughly to brown.

The two weasels molt to entirely white except for the black tip of the tail. Their camouflaged white frames hide them from their prey (mice and voles), and help them avoid becoming prey themselves from owls, hawks, coyotes, foxes, bobcats, and larger weasels (e.g., martens).

The white-tailed jackrabbit is the largest of our hares, its body a foot and a half or longer, and its ears longer than its head. It turns white in winter but may have some brown on its back; the black tips of the ears and the white tail remaining the same all year. The snowshoe hare is smaller than the jackrabbit, its ears the same length as its head, and turns completely white in winter except for black ear tips.

In 26 years, I’ve seen one of these creatures only once, a white snowshoe hare on the Forest Service 06 road as I was cross-country skiing at dusk. It was a mere quick flash of white but a beautiful sight nonetheless.

Do you have a question about an animal that turns white in winter? Email mountainlife@moonshineink.com.