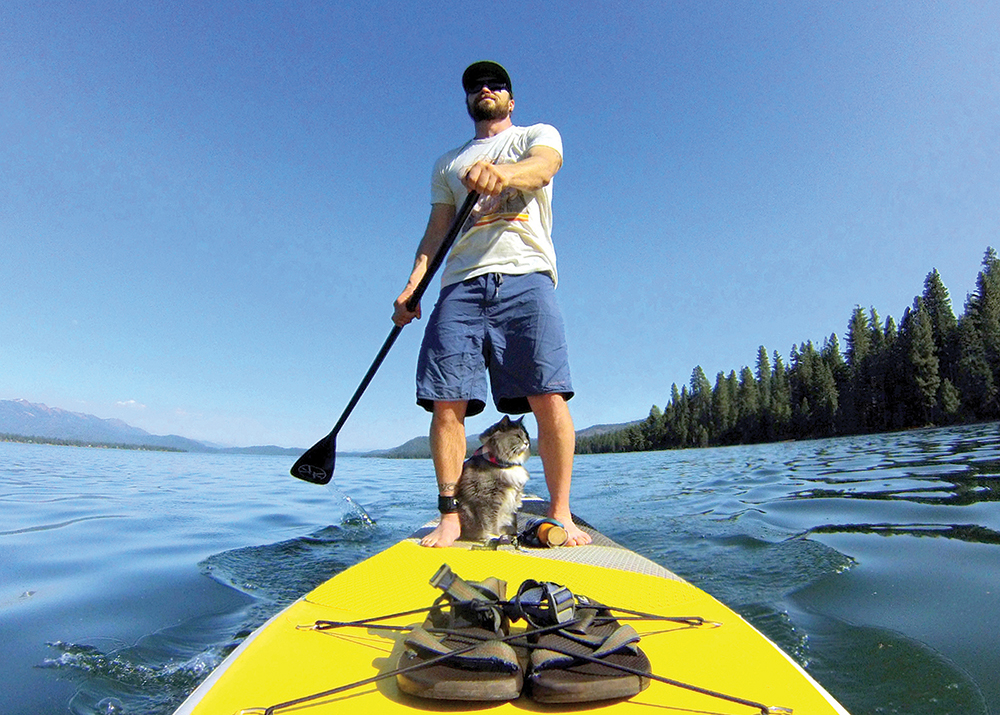 Tahoe is not a friendly place to domesticated animals. Take a spoonful of harsh winters mixed with a pinch of coyotes, and you’ll find an environment that is unforgiving to our furry companions. That said, a dog is a ski bum’s best friend. Right out of the box they’re ready to follow you on your every adventure; chasing you down the mountain on your skis or bike, or swimming in the lake during your Skylandia barbecue. Most of us do not look at a cat the same way. Cats have attitudes. Cats hate water. Cats are worthless. Well, what if I told you that some cats are not worthless? Would you believe me?

Enter Bruce. Bruce doesn’t play by the rules. Bruce paddleboards. He goes on hikes. He camps. He loves his little vest. Bruce even has his own freakin’ homemade sleeping bag.

Not all cats fall into the “adventure cat” grouping, but some legends say Bruce pioneered this category. Bruce has spent more nights in his own adventure van than most people have on those tacky Instagram accounts — and he doesn’t even get paid to show his butt in a thong while making coffee in the morning. He doesn’t even like coffee.

Bruce digs the water. From the impressionable age of 3 months, Bruce enjoyed water more than your average pup. You could find him jumping into the shower at every chance he had. By the time he was a year old, he felt at home on a paddleboard. He’s even been known to take a dip in the lake every now and then. Does this sound like a pussy cat to you?

Bruce isn’t one of those cats to sit in a backpack and whine the whole time he is out on a hike. He enjoys running alongside his owner, Chris Mortimer, occasionally stopping to sniff plants and stuff. Although he’s not the fastest creature in the forest, Bruce has even jogged the distance of a mile, eagerly keeping up with the long strides of Chris.

None of this is to say that Bruce does not have his faults.

Fault 1: Bruce cannot fit in a cat harness. He must wear a small dog harness.

Fault 2: Bruce gets anxiety for his first 30 minutes in the car. (He thinks he’s going to the vet).

Fault 4: Bruce sometimes wanders too far from the campfire and Chris must attach him to something to keep him safe.

“The key to having an adventure cat,” Chris tells me, “is to not force him to do anything he isn’t comfortable with. Let him experience the adventure on his own terms.”

Breaking the Stereotype: Bruce the Adventure Cat
Sports & Outdoors
12:00 am