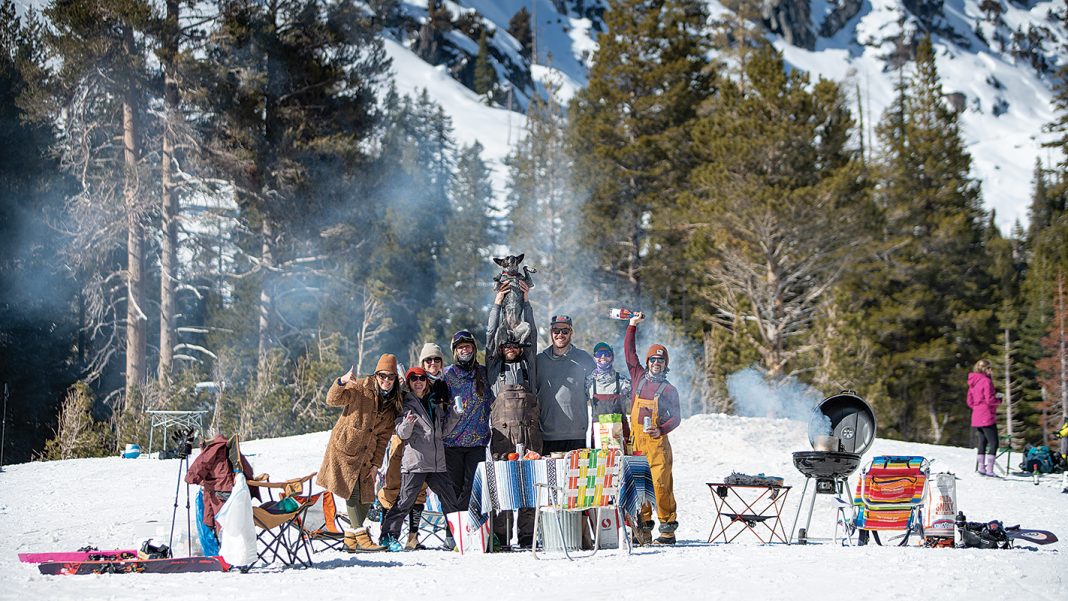 On a beautiful Sunday afternoon in February, Eric Mortensen, his wife, and another couple sat around a propane fire pit near the bottom of Subway chair at Alpine Meadows, enjoying a beer. They had been at the resort since 7:15 a.m., after packing up three sleepy kids, skis, and coolers full of food to drive up from Reno early in the morning to avoid traffic. Even though they rolled into the lot with plenty of time to find prime parking near the lodge, their destination was Subway Beach — one of many nicknames for the snowy field at the east end of the parking lot.

Upon arrival, Mortensen and his crew cooked up breakfast sandwiches on a camping stove and drank coffee. They changed the kids into their ski clothes and after skiing for a few hours, came back to cook sausages and s’mores over the firepit they had brought up from Reno, hanging out while the kids played.

While Subway Beach (also affectionately called Subway Dog Park, Doggie Beach, and Subway Lot) has always been known as a place for dogs to run around before and after skiing and as a laid-back zone to drink a few beers with friends après-ski, Covid-19 has transformed the area into a tailgating mecca. With the lodge’s indoor dining and bars closed, and with the onslaught of traffic that occurred after the massive storms at the end of January, more and more people are opting to arrive early and set up basecamp at Subway to enjoy a full day at the mountain in what many see as a throw-back to the early days of ski culture.

Alex Togler, who has been a regular at Alpine Meadows for eight years, opened Mogrog Café at the bottom of Subway chair last season. He has noticed a huge change at Subway Beach from last year. In the past, the après-ski tailgating season would begin in earnest in the spring — people eating and drinking out of cab-over campers and vans parked up against the snowbanks near Subway. But now, Togler regularly counts up to 12 small groups spread out on the “beach” with firepits and barbecues, and 10 to 15 dogs running around.

“Larger rigs and van life were already starting to happen there, but with Covid there was an exponential growth of ‘well, my car is my lodge, we are going to make it as fun as possible,’” he said.

And there is another new trend —after the 6-foot dump in January and the ensuing traffic, the breakfast scene at Subway exploded. Mogrog Café normally opens at 8 a.m., but on the first weekend after the storm, when both the upper and lower parking lots filled up by 9:30 a.m., Togler had a line out the door at 7:15 a.m. To accommodate the new early-riser crew, Mogrog now welcomes them at 7:30 a.m. on weekends.

“Our 8 a.m. and 4 p.m. sales are higher than they ever were last year,” Togler marveled.

He appreciates the old-school mountain vibe of the Subway scene, and the socialization it offers to people one year into Covid.

“I think it fits the Alpine Meadows vibe so well. If I didn’t own the café I would be totally embracing and doing the same thing,” he shared. “So many of us are missing out on our casual encounters that an opportunity to see friendly faces, even from a distance, is very joy invoking and it helps reassure us that normalcy could be returning.”

Mike Rogge has been skiing at Alpine Meadows and bringing his dogs to Subway Beach for 10 years. He parks his van at Subway and skis while his 7-month-old golden retriever Quinn sleeps inside, then changes out of ski boots and lets Quinn play while he takes phone calls. Now that Rogge has a 2-year-old son who skis exclusively at Subway (thus far), the area is even more perfect for his family. It also provides a safe space for seeing friends. On Christmas Day, Rogge and his family met up with five other families at Subway Lot. 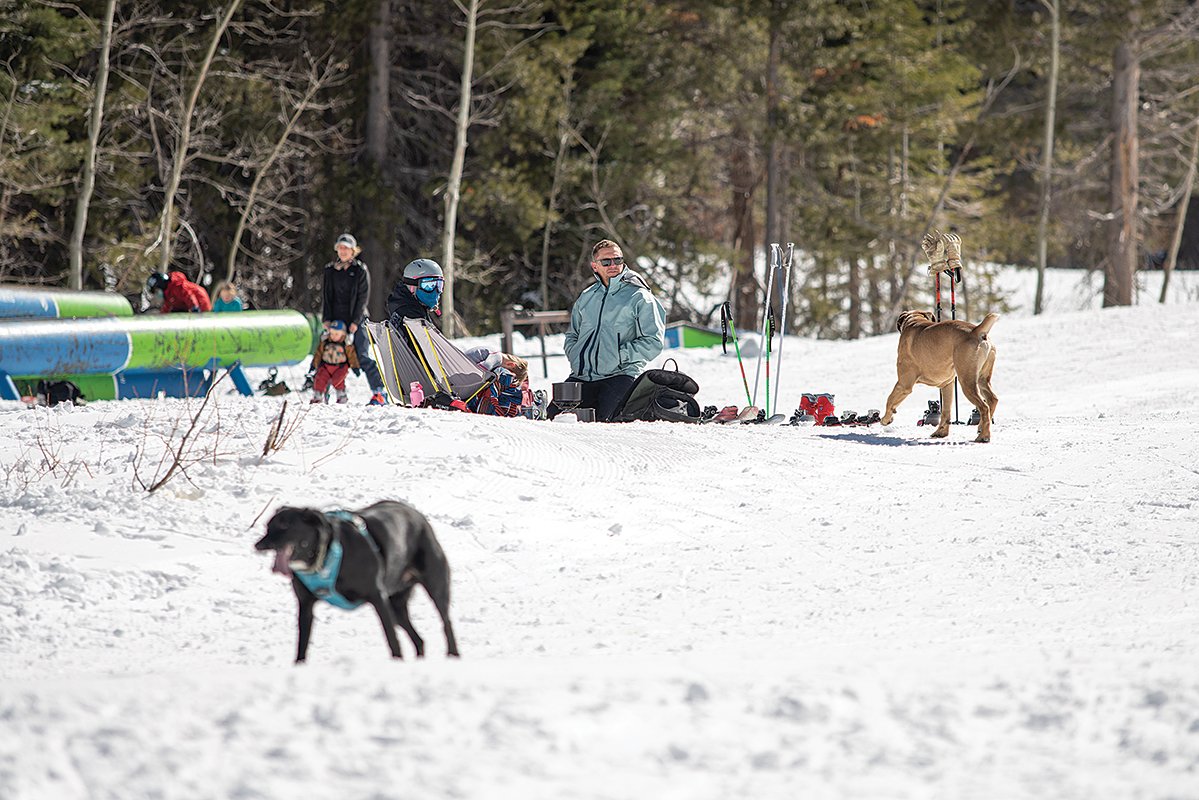 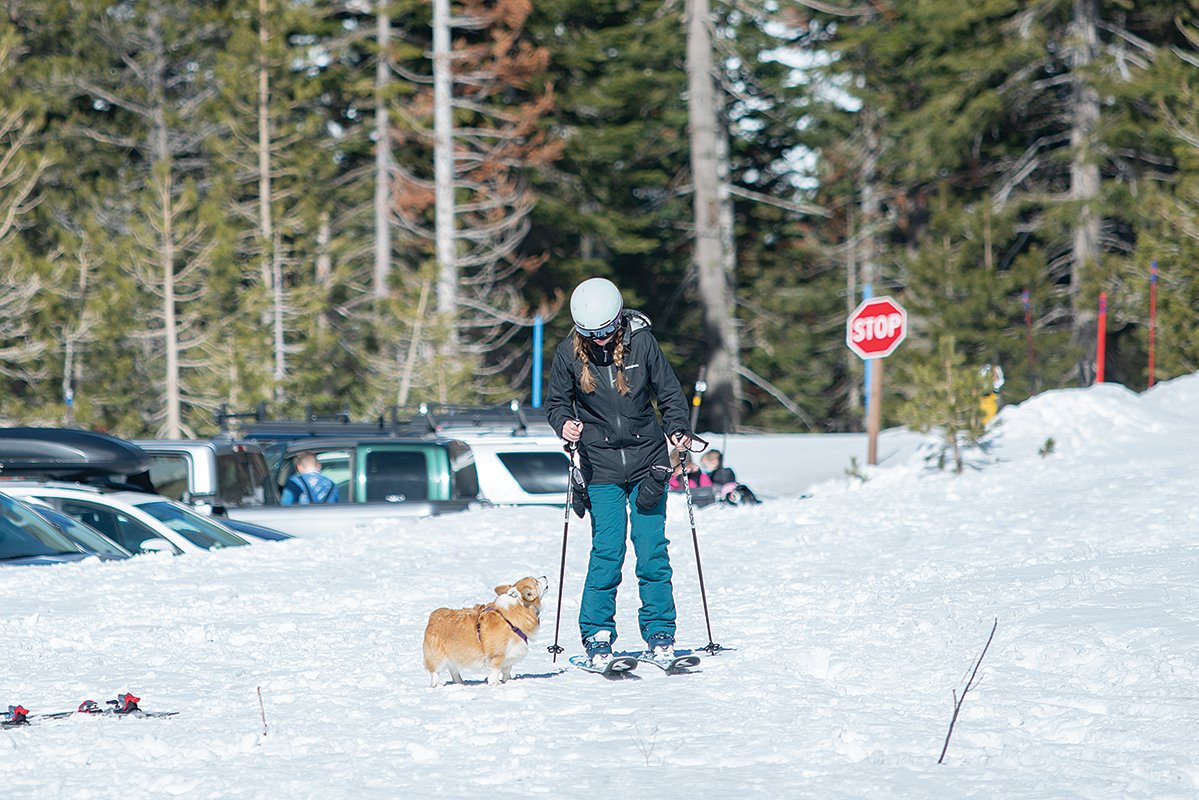 “It’s actually the only place we’ve seen our best friends in Tahoe since Covid,” said Rogge, who describes the scene as, “a lot of dogs, a lot of kids, not pretentious, a lot of vans … people pop open their truck and have charcuterie ready.”

Megan Michelson, who started skiing at Alpine when she was a kid, parks at Subway for easy access for her children, ages 4 and 6, and has noticed the two-burner stoves, lawn chairs, and breakfast parties that have been popping up this year. She hopes the old-school vibe of Subway Beach continues long after the pandemic subsides.

“It feels like back in the day — skiing was a more affordable, rootsy, dirtbag-friendly activity people could do for cheap out of the back of the car,” she said. “If we are returning to that, that’s good for skiing. If throwing a camp chair and a cooler of beer in the back of the car makes skiing more friendly, that’s great.”

On that same sunny afternoon in February, Hannah Greinetz of Homewood was sitting on just such a cooler enjoying an IPA while her friends’ dog Jasper ran around the lot. She had arrived at 8:15 a.m. and observed the cooking stoves and breakfast preparations.

“This year people are more equipped,” she said. “Last year people had muffins and coffee, now they have charcoal grills.”