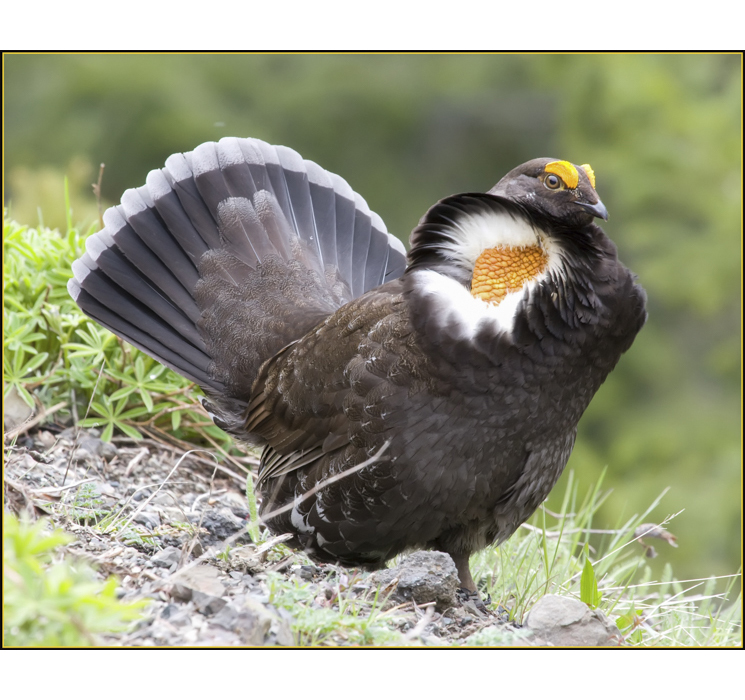 While cross-country skiing with a friend in late March in Euer Valley, we heard the loud, but muffled echo, which I later learned was from a sooty grouse.

As loud as the sound reverberated throughout the woods, we couldn’t see the source, which is often the case. Even though the sooty grouse is fairly large, about the size of a chicken, its plumage camouflages it well: “sooty” gray-blue feathers on the male with a contrasting light gray band at the end of its black tail, and brown feathers on the female.

Plus, they’re sneaky; these large birds hide high in the tree tops, up to 100 feet. But darn, I wish we could have seen their mating display, when the males strut their stuff in March and April. Looking at numerous YouTube videos, I witnessed a male inflating his throat air-sacks, and with each “woomp,” the unfeathered skin on the sides of the neck (think elephant skin) looking like mottled yellow-orange egg yolks in white circles (eyebrows to match). For hours he hoots, adding other fancy displays to attract the opposite sex, such as fanning his tail upright like a peacock and strutting along tree branches. With success, the mating occurs, at which time the male moves to a higher elevation with a group of his male peers. The ladies remain behind, and in late May through July they prepare their nests in shallow depressions on the ground lined with forest duff, and lay 5 to 10 eggs. About a month later they meet up with the males, youngins in tow.

A note of caution: Being territorial, particularly during the breeding and nesting season, the sooty grouse female will aggressively chase any human in her path.

I’m guessing the sooty grouse is as glad to see spring as we are; they’ve been hunkering down all winter long too. Unlike a lot of birds that migrate in the winter the sooty grouse stays behind and actually seeks higher elevations, up to 11,000 feet, surviving on the tips of pine and fir needles. If you thought you were roughing it this winter, imagine the sooty grouse perched high in the tree tops during tempestuous snowstorms, blown here and there, hanging on for dear life. That’s a brawny bird! But with winter’s end and a little sunshine and warmth the sooty grouse welcomes spring much like we do, feasting on berries. When exploring the outdoors we don’t always get to see the marvels of nature; sometimes we only get to hear them, like the sooty grouse bellowing its signature call. But for how long are we privy to this bird?

The sooty grouse populations, as stated on the Cornell Lab of Ornithology website, have “declined by almost 2 percent per year between 1966 and 2014, resulting in a cumulative loss of 57 percent, according to the North American Breeding Bird Survey.” Thank goodness it’s listed on the 2014 State of the Birds Watch List as a species that is “at risk of becoming threatened or endangered without conservation action,” which qualifies it for conservation. Hopefully this action will keep what sounds like a tuba resonating through the forest.

~ Do you have a question about our region’s environment? Email editors@moonshineink.com.

“One touch of nature makes the whole world kin; and it is truly wonderful how love-telling the small voices of these birds [grouse] are, and how far they reach through the woods into one another’s hearts and into ours. The tones are so perfectly human and so full of anxious affection, few mountaineers can fail to be touched by them.” ~ John Muir, Our National Parks, 1901

A Booming Sound of Spring: The Sooty Grouse