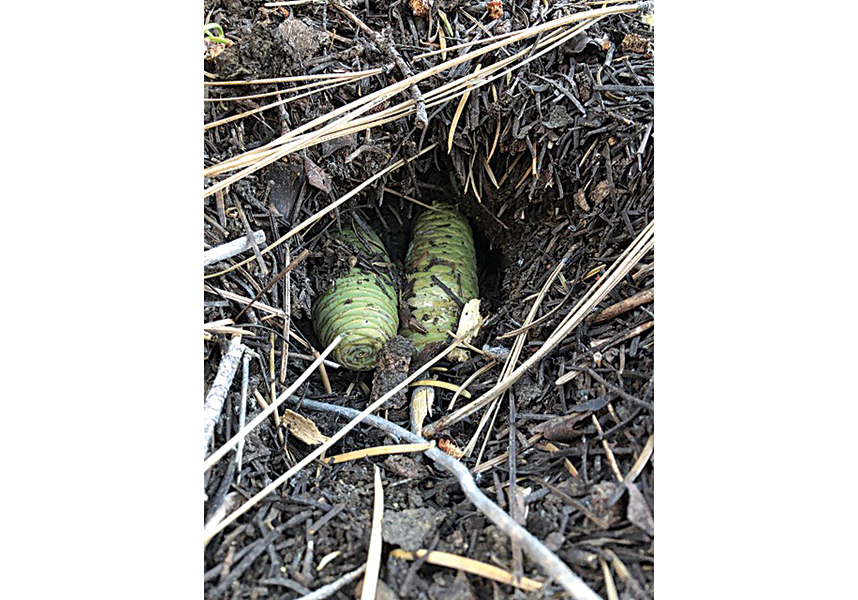 Those “thumps” you hear on the ground as you’re walking in the woods or down the street in your neighborhood? One by one, and sometimes fast and furious? Tree squirrels are busy in the treetops, harvesting cones from ponderosa and Jeffrey pines and white and red firs. In this act, it seems as if they’re trying to tell us what we should be doing right now: Getting ready for winter!

Two tree squirrels in the Truckee area, the Douglas squirrel (Tamiasciurus douglasii), aka the chickaree, and the western gray squirrel (Sciurus griseus), begin this process of caching — storing food for the winter — by using their sharp incisors to detach the cone at its base from the tree. These teeth (two on top, two on bottom) are good for penetrating into cones and cracking the coating on seeds. An interesting fact about the incisors is that they keep growing during the life of a squirrel. One habit is to hone the incisors by rubbing them against one another, much like sharpening a knife on a honing tool. At the same time, the incisors get worn down with constant cutting and nibbling. Gradually over time, however, if they aren’t used enough, oversized incisors can prevent the jaw from opening and the animal can starve to death. Sometimes the incisors angle to the side as they grow, still allowing the animal to chew, but the teeth themselves become nonfunctional.

After detaching the cone from the tree, and letting it drop to the ground, or by giving the cone an extra flick in the air with a jerk of its head, the squirrel has two options: eat or store. Not only do chickaree and gray squirrels collect cones, they eat them on the spot on a tree branch or on the ground, pulling off the scales to get to the seeds, which are high in oil and carbohydrates. This instantaneous foraging guarantees a nice layer of fat for winter.

For winter storage, the critter scurries down the tree to hide the cones in small, orange-sized indentations in the dirt, called middens. The cones can be a dense, heavy green — which remain in the ground longer, like a ripening avocado — or more mature brown. According to northernwoodlands.org, “One squirrel may collect more than 15,000 cones during this fall activity.”

Middens, also called larder or food storage, will eventually be covered by leaves, dirt, and harvested scales. The decomposing piles of debris, and the cold, damp earth, provide moisture to the cones, keeping them preserved by preventing them from drying and opening. Squirrels are very territorial about their middens, which can be used year after year by the same squirrel. You might hear one squawking, “pew, pew, pew” in a treetop, its whole body moving with each sound, warning another animal to keep away.

Middens are usually found next to tree wells — the area around the trunk of a tree — which are easier for squirrels to get to in the winter. They don’t receive as much snowfall since the ground is far from the base, and the trunk area is protected by the many layers of branches above. Additionally, under a trunk or by a downed log, a “subnivean” layer forms between the ground and the snow directly above it, the soil containing heat. This empty layer/space (a 1 to 2 inch gap) provides a place for a squirrel to burrow and find its middens, explains Dirk Van Vuren, UC Davis wildlife, fish, and conservation biologist. During the winter, the squirrel quickly scouts for, then enjoys, its prepared winter meal.

Finally, the burning question: Does the visible increase in “bombing” of cones we’ve seen and heard this fall indicate a heavy winter? Van Vuren says it’s more likely that squirrels are reacting to a big cone crop year rather than predicting what’s to come. They’re responding by capitalizing on the supply and caching as much as they can, for this year and next. The same question could be asked of the pine and firs themselves: Does an abundant year of cones predict a heavy winter? In a 2016 online article, Jay Dee Gunnell, a Utah State University horticulturist, said this: “Pine trees can’t predict the future, but what they can tell us is past climate factors. Pine cones take two years to develop, so what we can tell when we see a lot of pine cones is that they’ve had two seasons of good climates.”