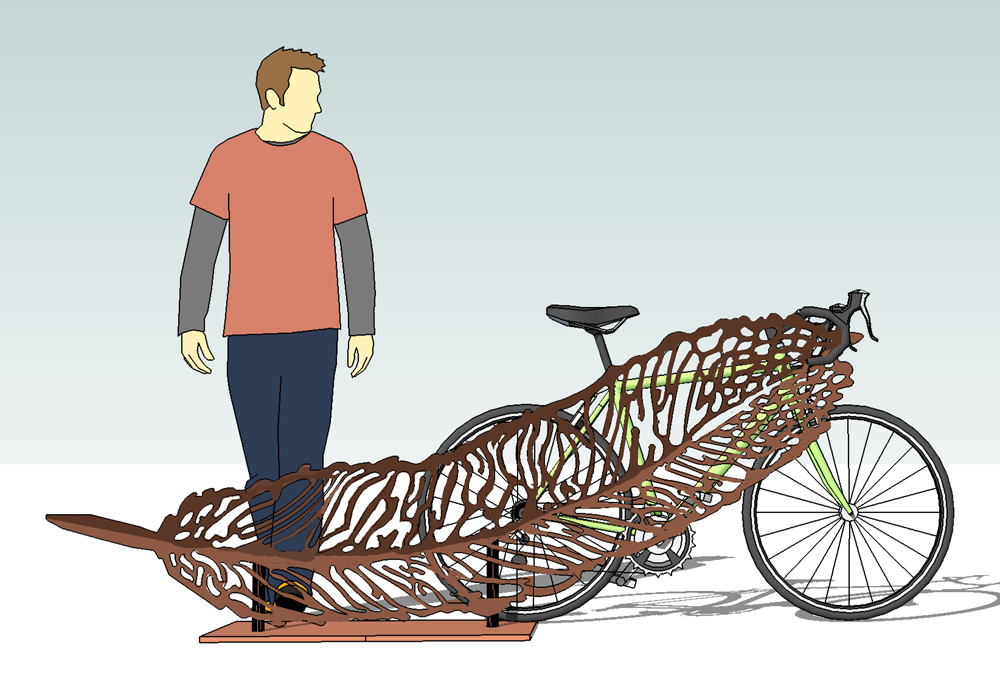 Truckee is known for many things — Donner Lake, its active outdoor lifestyle, and its many artisan shops, to name just a few. So why not combine all these elements into one piece of functional art?

Last year, the Truckee Public Art Commission (TPAC) put out a call to artists to submit renderings for a bike rack project that will install three bike racks throughout the town of Truckee. Seventeen artists submitted 41 different designs, and 50 designs came in from local elementary school students.

Through fundraising and silent auctions, as well as a $10,000 grant from the Tahoe Truckee Community Foundation’s Queen of Hearts Women’s Fund, TPAC raised $15,000 for the three bike racks. Troy Corliss, a founding member of TPAC and the artist who designed the Mountain Flowers sculpture in the Pioneer Trail roundabout, was inspired by other small mountain towns like Park City, Utah and Boise, Idaho that have completed similar projects. Each artist was asked to design a rack that wouldn’t exceed $5,000 in cost.

“What’s appealing to this project is that its budgets are small, it’s accessible to local artists, and it’s a way to get small art projects around town,” Corliss said.

Donner Lake’s West End Beach is one location that will receive a bike rack. Two second-graders, who both submitted a Chinese dragon drawing, collaborated to complete the final design. Students Hope Smith and Florian Standteiner will see their design come to life at the end of the summer when Mountain Forge, the Standteiner family business, begins construction on the bike rack. Smith’s description explains that this design is in honor of the Chinese who worked on the railroad in Truckee.

The second bike rack, designed by Truckee local Lauren Bello, will be a feather sculpture located at the Community Recreation Center. The Truckee River Regional Park will serve as the third location, and the design for that area will be picked shortly. The design originally selected for the park was determined to be a better fit for the Brickelltown Streetscape Improvement Project.

The Truckee Town Council voted unanimously at the beginning of the year to take some of the bike rack designs that TPAC did not select and install five of them throughout town. Three of them will become part of the Brickelltown project, which will be completed by the end of next summer.

Coincidentally, Kelly Brothers Painting proposed an interactive sculpture of a stationary bike as part of the development agreement for its new building in the Pioneer Commerce Center. The painting company agreed to install its public art downtown where it will be more visible. Owner Bill Kelly, who designed the sculpture with two artists, hopes to have the 20-foot in diameter and 16-foot tall bike installed by the old loading dock downtown.

Tahoe Forest Hospital will also get an artistic bike rack called Animal Tracks this fall. A nurse who was inspired by the TPAC project donated the money for the rack, designed by of Kevin Kremler, manager of New Moon Natural Foods in Truckee.

Corliss explained that the intent of the project is to get the community involved in placing artwork in public places in a town that already embraces local artists.

The final decision on the placement of the town’s bike racks was made at the Truckee Town Council meeting on July 8, after Moonshine Ink’s deadline.