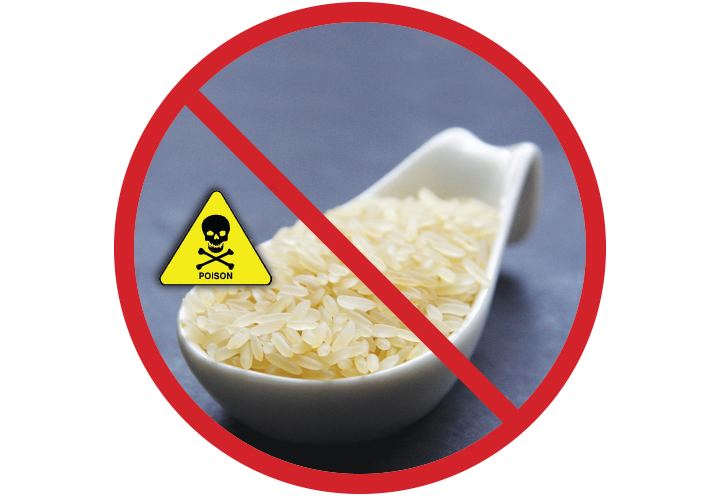 Arsenic was once known as the poison of kings and the king of poisons; the former because it is thought to have dethroned many a royal throughout history, and the latter because it made the perfect murder weapon. Being odorless and tasteless, arsenic could easily be mixed into an enemy’s drink. And until the 1830s, it couldn’t be reliably traced in the body.

But ironically, it is arsenic’s other uses in history, as an ingredient in skin whiteners and medicines (it was once a treatment for syphilis), and in pigments for paint and wallpaper, that caused more deaths over the years than did intentional poisonings.

Thankfully, we no longer have to worry about arsenic in our wallpaper, but we’re still exposed to the substance every day. Arsenic is a naturally-occurring element, released from volcanoes and present in mineral deposits. But most of the arsenic in our environment comes from industrial and agricultural uses — it’s a component of wood finishes and is released into the air through the burning of wood, coal, oil, and gas. Arsenic is even used as a growth enhancer for chickens, and so finds its way into the soil through chicken manure fertilizer. And although lead-arsenate pesticides were banned in the ’80s, residues remain in the soil today, especially in the southern rice-producing states of Texas, Arkansas, Louisiana, Mississippi, and Missouri.

It’s little wonder, then, that arsenic has found its way into our food and water supply. Federal standards exist to protect us from arsenic in drinking water, but virtually no equivalent standards exist for foods.

Recent studies show why this might have to change.

Two months ago, the U.S. Food and Drug Administration and Consumer Reports released independent studies of arsenic levels in rice, and the results were troubling. Each organization tested 200 or more samples of rice and rice products from the U.S. marketplace. Although arsenic levels varied wildly, even within the same food sample, one thing was consistent — every product tested positive, and some samples were so high that eating a cup of cooked rice could expose you to as much arsenic as you’d get in an entire day of drinking water at the federal maximum.

The FDA is collecting an additional 1,000 rice samples before recommending any dietary change to the public. In the meantime, they advise eating “a wide variety of grains — not only for good nutrition, but also to minimize any potential consequences from consuming one particular food.” Consumer Reports is taking a much more proactive approach, suggesting that people (especially infants and pregnant women) limit their consumption of rice and rice products, substitute other grains, and cook rice in a way that reduces arsenic levels (see sidebar).

To understand your threat from arsenic, it’s important to know a few things. First, there are two forms of arsenic, organic and inorganic. Together, they comprise “total arsenic.”

Inorganic arsenic is the more dangerous form. Classified as a Group 1 carcinogen, inorganic arsenic has been shown to cause skin, lung, and bladder cancer in humans. Scientists believe it may also target the kidneys, liver, and prostate. Although the other, organic, form of arsenic is generally assumed to be non-toxic, the International Agency for Research on Cancer considers it “possibly carcinogenic.”

All fruits, vegetables, and grains take up at least some arsenic as they grow. But rice absorbs more than most crops because it is grown in flooded fields, where it takes up arsenic from the water above ground as well as the soil below.

The FDA has been testing arsenic in food samples for 20 years. Apples and grapes have been previously targeted as high sources, but the FDA has taken steps to reduce arsenic levels to about three parts per billion (ppb), which is below the 10 ppb federal limit for drinking water. Three ppb is a proposed “action level,” not a federal limit, so the arsenic levels in some individual juice samples may be higher.

Fetuses, infants, and small children are most vulnerable to arsenic because of its effect on organs, especially the developing brain. Unfortunately, rice cereal is often served as a baby’s first solid food because it is considered less allergenic than wheat. But two or three servings of rice cereal per day could double an infant’s risk of cancer.

Asians, Hispanics, and people on a gluten-free diet are also at risk since they may eat higher than typical amounts of rice and rice products.

To protect yourself and your family from excessive arsenic, follow the tips below, and try cooking your rice in lots of water, as explained in the recipe in the sidebar.

~ For more information about arsenic and rice, read the November 2012 issue of Consumer Reports, which lists test results, including product and brand names, or visit fda.gov. Comment on this column below.

Arsenic and Rice: An Unfortunate Link