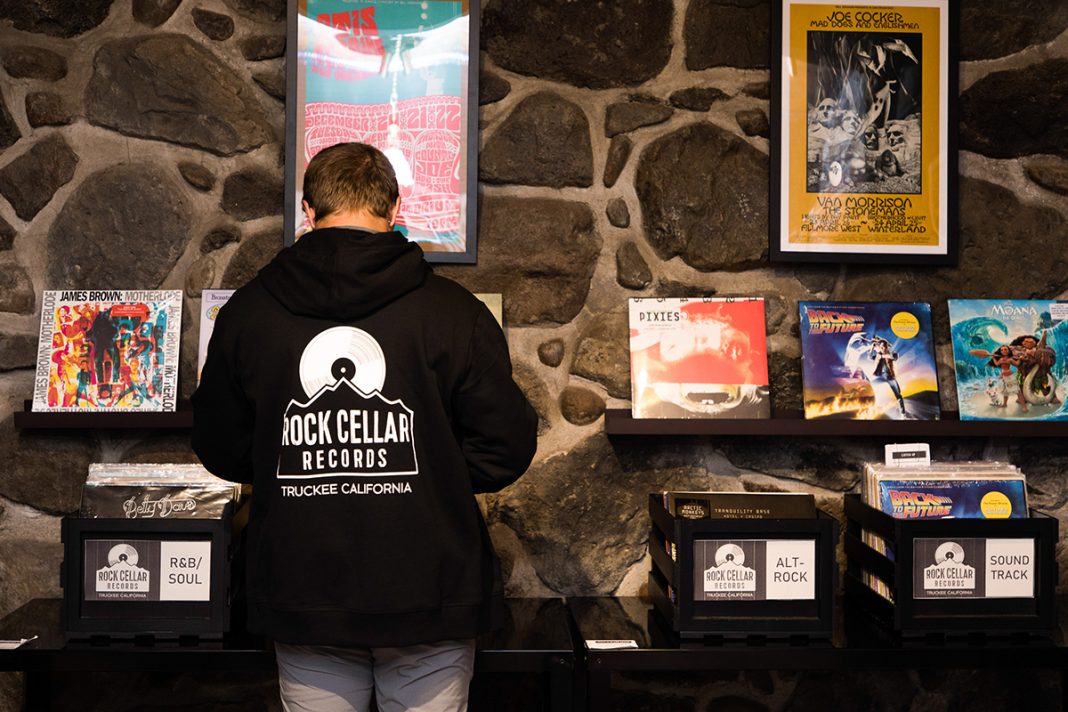 When Andie Keith  talked about opening a bookstore in Truckee, people thought she was crazy. Never mind the fact that she had no bookstore experience — but why, in the name of Amazon, would anyone open a bookstore in a time when actual books in print were a dying breed? Four years in, and with another new endeavor underway called Rock Cellar Records promising vinyl heaven, it’s safe to say the naysayers have been proven wrong.

So how does an independent bookstore not merely survive, but actually thrive in a digital world?

It’s all about the experience, says Andie.

As a matter of fact, that’s exactly what Harvard Business School professor Ryan Raffaelli concluded in his 2020 paper, Reinventing Retail: The Novel Resurgence of Independent Bookstores.

Raffaelli found that between 2009 and 2018 independent bookstores proved to be “far more resilient than expected” with a 49% percent growth in the number of “indie” booksellers from 2009 to 2018. He advised other would-be indies to follow his advice in several areas: communicate the value of community and encourage customers to participate in a broader movement to shop local; compete primarily on experience and quality, not on price and inventory; establish the bookstore as a gathering place by offering events that consumers view as unique experiences, with events that cater to local tastes and the specific interests of the community; and contribute to (and utilize) industry data on emerging independent retail trends.

Andie herself might as well have written the book on being a successful indie because since 2017, she’s been doing all of the above.

“There’s this niche that we fill,” she says. “There’s something about a town having an independent bookstore that people are drawn to.”

On a recent Friday afternoon, the historic Truckee Mercantile Building that now houses Word After Word Books was bustling with folks looking for the perfect read. Books were slid off shelves and fingers glided over covers as would-be readers glanced at cover art, finally opening up books and turning pages as they sampled the first few lines to give the stories a chance to reel them in.

It’s that hands-on experience that continues to breathe life into the independent bookseller market.

“When we first started out, we very quickly realized that we couldn’t compete with them,” Andie says of the notion that Word After Word is up against Amazon and big box retailers like Barnes and Noble.

Sure, there are those who just want to pay the lowest price possible, but there’s something about strolling into your neighborhood bookstore, being greeted with a warm welcome, and having someone guide you to find the perfect selection.

“We’re all book nerds,” general manager Tara Flanagan said with a laugh on a busy Friday. “People love the selection that we curate and that we can talk about the books with them.”

While they do have a team that curates the books, Word After Word’s customers often serve as its unofficial book buyers. There are countless conversations on a daily basis among patrons and staff members sharing their favorite book titles and recommendations.

Over the years, through a big move and the pandemic, the team at Word After Word has found that the best way to serve their community is through relationships with their customers and the community. Part of their mission includes giving back to the community in the form of books for local schools, the library, and the senior center.

Andie is quick to admit that the driving force behind the success of her shop is the solid team that runs the show. She’s just happy to be a part of it.

The experience doesn’t stop on the main floor, however. In May, just in time for Independent Record Store Day, Andie and her husband, Scott Keith, set out to fill yet another niche in the community when they launched Rock Cellar Records. If the aesthetics of the Mercantile building weren’t enough to give you that Old West feel, with its tin ceiling, sliding wall ladder, and brick walls, descend the stairs just inside the front door and you’ll really feel as though you’ve stepped back in time.

“This space is bigger than all of us in the sense that it’s got this really, really unique vibe to it,” Scott told Moonshine. “It’s always had a vibe. There’s a lot of stories that people talk about and don’t talk about.”

The brick- and rock-walled basement has a borderline spooky aura to it. And it should — there have long been ghost stories told of supernatural presence. The small back room where old records are cleaned up for resale supposedly has a bone encased in between the rocks. But today you’re more likely to find a different sense of spirit down there as you step back in time to the days when vinyl ruled the airwaves.

Old music posters and photography from Scott’s personal collection adorn the walls. Crates on rolling tables line the space, filled with albums old and new. It’s an eclectic mix, featuring rock and roll from the ’60s, ’70s, and ’80s, and everything from Van Halen and Joni Mitchell to TLC and the soundtrack from You’re a Good Man, Charlie Brown. The collection has about a 50/50 split between new releases and albums they’ve acquired from people parting with their own personal collections.

While books and records could seem like an unlikely marriage, the folks running the show think they’re kind of perfect for each other. Akin to pulling a book from the shelf and opening it to read the first couple of pages to test it out, listening to a record is an experience, from holding the album in one’s hands and checking out the cover art to sliding the record from its sleeve, setting it on the turntable, and setting the needle down to hear that first beat or chord.

“It’s just the nature of the vinyl itself, right? It’s more physical, more purposeful,” says Scott. “It just seems to unlock some powerful memories that streaming digitally misses out on. Truckee is an experiential place, and the music scene here touches everyone. We’re hoping that a vinyl shop like this can make the Truckee music scene even more meaningful.”

Are You Experienced?
Family

Are You Experienced?
Arts & Culture

Are You Experienced?
Sports & Outdoors
All Day

Are You Experienced?
Business