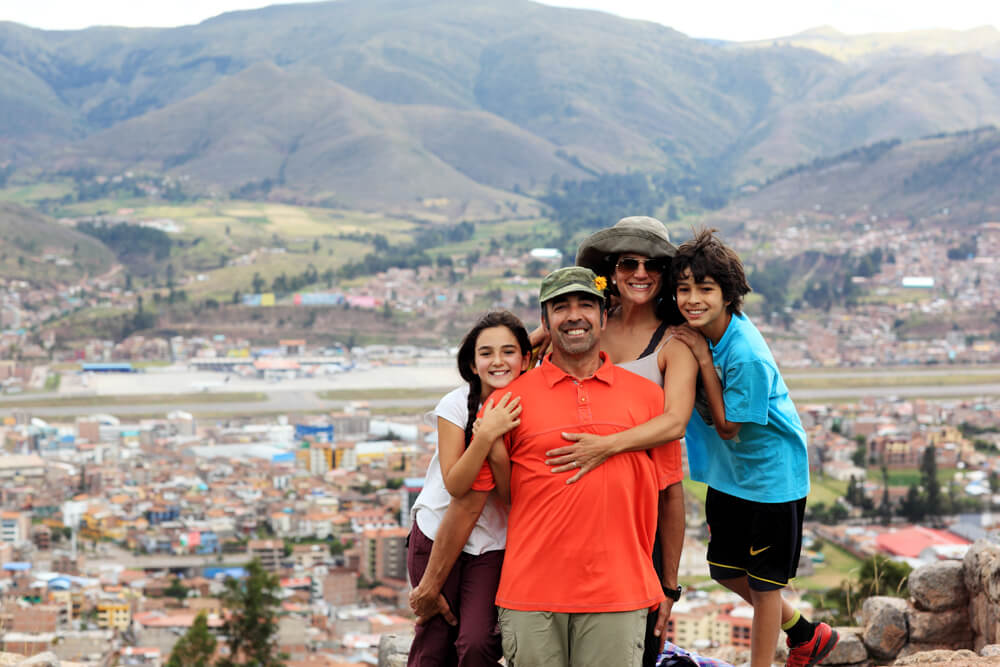 Kids’ bodies, hearts, and minds love adventures. Whether it’s riding on a plane for the first time, speaking a new language, going to the movies with someone you have a crush on, climbing a high ladder, playing in the woods, or eating food you have never tried before, adventures make us kids feel excited, unnerved, and after a bit of time, unstoppable.

Vincenzo Pellegrino, 13, a seventh grader at Alder Creek Middle School, and his sister, Lucia, 10, a fourth grader at Kings Beach Elementary, are definitely diving into the unfamiliar. In January, they left on the biggest adventure of their lives with their parents, Kristie and Giancarlo. They moved from Truckee to Cusco, Peru for eight months.

The flame of this adventure ignited when Giancarlo was a child: he visited his mother’s family in Peru every summer until he was 14. Since Lucia and Cenzo were babies, Giancarlo has spoken to them in Spanish, and enrolled them in the Kings Beach Spanish immersion program.

“We knew when our kids were old enough, we would share with them the gift of Peru that was given to Giancarlo,” Kristie said.

But it wasn’t easy getting to their dream place. Kristie, a photographer and a hairstylist at Urban Angels, told me that making this trip happen involved sacrifice. “We sold off snowmobiles, a trailer, furniture, and camera equipment. We rented our home and sold our truck. We left our jobs, insurance, and most importantly, our friends and loved ones,” she said.

Those of you who have gone on a trip before know what it’s like to miss your friends, your home, and your town. It’s hard to be gone, but usually you’re home before you know it. Now put yourself in Lucia and Cenzo’s shoes and imagine being gone for not one or two weeks, but for nearly a year!

My longest adventure lasted three and a half months when, in 2010, my family lived in Uzes, France. Even though our trip was filled with new experiences, the anticipation of going was one of the most exciting and unnerving parts.

I interviewed Cenzo and Lucia a few days before they left and they described their hopes and fears. Cenzo looked forward to meeting his cousins. He feared missing his friends and said he’d seen movies about kids moving to other countries where the kids are jerks to them. Lucia looked forward to it being summer in Peru, but was sad to leave Truckee’s night stars and feared venomous bugs.

We emailed after their first full month. “I feel homesick almost everyday,” Cenzo wrote. “When I start to meet new people, though, I think I will start to feel more at home.”

Despite their times of homesickness, the Pellegrinos came together as a family. At home in the states they didn’t get the chance to be together very much because Giancarlo worked so many hours managing Campo in Reno. “The memory that will forever stick in my head,” Lucia told me, “is the first dinner we had in our apartment. We shopped for food all day and ate chicken wings my dad made.”

In April, I interviewed them for a third time. The adventures were mounting and the kids sounded unstoppable: attending school across the street from their apartment, making friends, exploring the city, hiking to places like El Cristo Blanco (the White Christ), a statue located on a hilltop high above Cusco.

I asked what connected them to Cusco. Cenzo and Lucia both answered the mountains. This is interesting to me because they live in a big city in South America yet the thing that makes them feel most at home there is the thing that is most like Tahoe.

“There is this mountain called Salcantay,” Lucia said. “It looks like Squaw and reminds me of home. It’s the most beautiful thing I’ve seen since I’ve been here.”

The Pellegrinos have four more months to go. They plan to climb more mountains, like Ausangate and Choquequirao, and I’m sure they’ll make more friends, but their greatest adventure might just be growing together in new ways.

“Giancarlo and I have discovered being together as a family — really together with no Internet at our fingertips and no afterschool activities — is an experience we will cherish forever,” said Kristie.

A Truckee Family’s Peruvian Adventure
12:00 am