Home Columns Get Out & Go GET OUT & GO: Crystal Mine 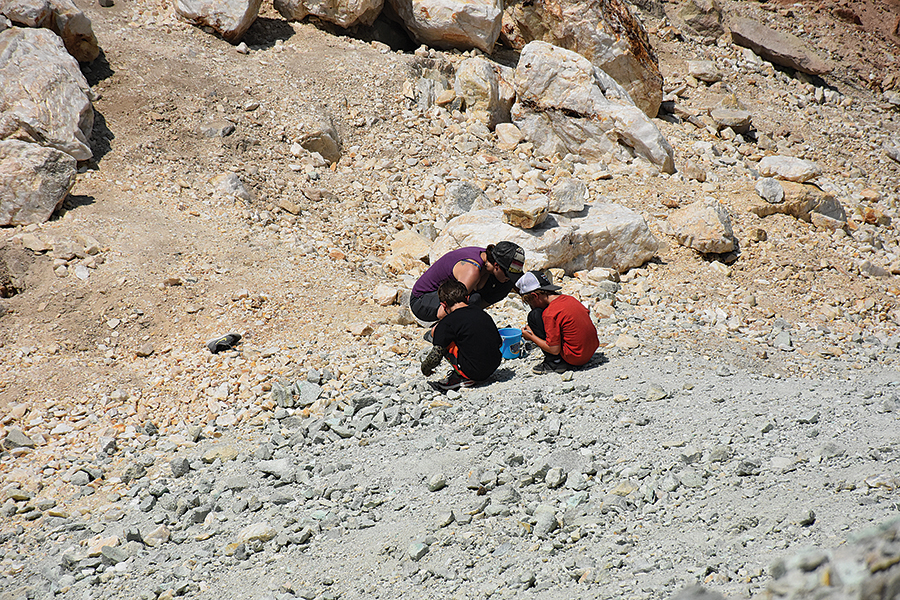 Crystal Peak Mine just might be one of the worst-kept-secret secret places in our area. Nestled in the hills of the Humboldt-Toiyabe National Forest near Verdi, it’s the former site where quartz was mined to use in two-way radios during World War II. You can often find that you have the peak pretty much to yourself — unless you’ve gone anytime recently. On a recent Sunday, the dirt roads resembled more of a main thoroughfare than quiet trails tucked away from the hustle and bustle of I-80, with folks looking to recreate in the great outdoors during this period of spending too much time indoors.

As stay-at-home orders are softened and more outdoor recreation options are available, the backcountry crowds are likely to become more dispersed. When crowd levels are COVID-safe, an off-road jaunt to Crystal Peak Mine can be fun for geology enthusiasts and novices of all ages looking to scour the summit for quartz crystals. According to the U.S. Forest Service, during the mine’s active days, dynamite was used to blast the hillside and bring the crystals to the surface, of which plenty remain to be gathered today. (Visitors are limited to one 5-pound bucket of crystals per week.)

First off, be sure to go equipped, starting with your mode of transport. A four-wheel-drive is your best bet unless you’re going to head in on a dirt bike or other rock-crawler-type vehicle. You definitely want to bring some tools to help ensure a successful quartz-mining mission. Gardening-sized tools like a trowel and rake, even a tiny pickaxe, are small and easy to carry. Don’t forget to bring a pail to collect your treasures. And be sure to have a spare tire and car jack because you just might find yourself in need.

To get there, take I-80 to the California-Nevada stateline and hop off at exit 2 toward Verdi, Gold Ranch Road. In .6 miles, turn right onto Third Street, following for 1 mile and making a left onto Bridge Street. In .6 miles, turn right onto Dog Valley Road and let the fun begin as the smooth pavement becomes bumpy dirt and rock road, following 3.3 miles and then bearing right and continuing on for another 4.8 miles until turning left and reaching your destination 150 feet up the hill.

Main Image Caption: DIGGING IN: Rockhounding can be back- and neck-breaking work, but it sure makes for a unique adventure. Photos by Juliana Demarest/Moonshine Ink

GET OUT & GO: Crystal Mine
Education