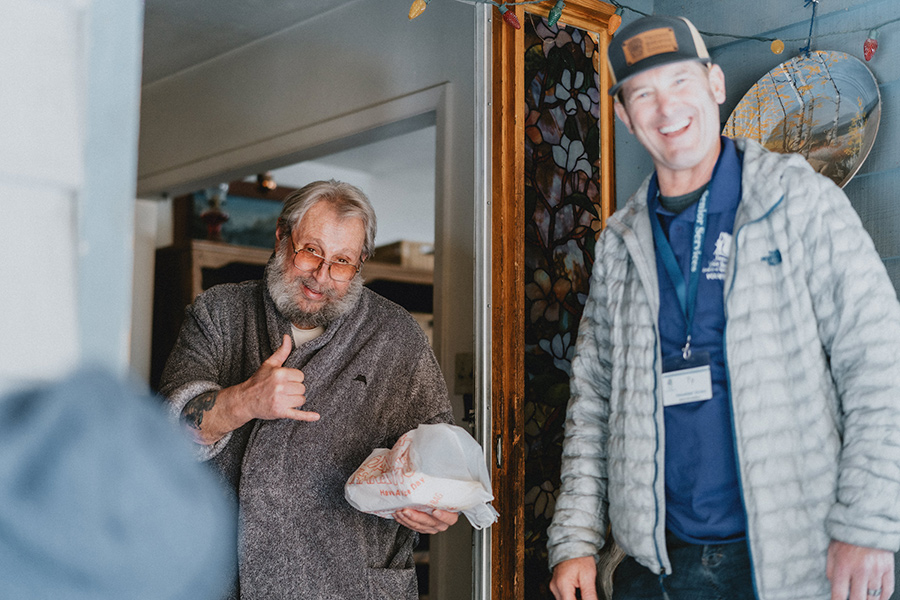 The man standing in the doorway, sporting a bathrobe and holding a plastic bag of chicken noodle soup and a banana, peered out onto his porch at the small group of people clustered there.

“Are you playing your—” he began.

“Still driving her nuts?” Danny continued, a twinkle in his eye as he glanced at Ty’s wife, Michelle, nearby on the porch.

“She puts her headphones on,” Ty chuckled.

“You do it every time you want to do it,” said Danny, granting  Ty permission to play.

Michelle jumped in. “Woah, woah, woah!” she laughed. “Whose side are you on here?”

Danny was stone-faced, though his mischief was infectious through the facade. “I’m on his side.”

He then turned to me, his voice scratchy in a pleasant way. “Let me tell you, these two guys right here, that young lady and this guy, I love them to death. Every Wednesday, it’s like, ‘Oh, my kids are coming.’”

Back in the car, Ty and Michelle, both retired fire captains from Sacramento Metro Fire District, swap facts about Danny’s life: His father was a doctor who spoke eight languages and died when Danny was young; he’s a vet who taught himself Spanish to be able to communicate with those in the nursery he worked in.

Since March of 2019, the Eidams have pieced together the backgrounds of those they serve through Sierra Senior Services, the local Meals on Wheels provider, over the course of many visits. The program provides home-delivered meals to seniors living independently in the North Tahoe community five days a week, with the option for frozen weekend meals. Moonshine staff joined the fray on a mid-January Wednesday, hovering on the sidelines as Ty and Michelle made the rounds.

Each weekday, drivers spread out across Truckee, Squaw Valley and Alpine Meadows, Kings Beach, Tahoe City and the West Shore, and Incline Village/Crystal Bay with a different meal in tow — anything from white turkey chili to shrimp stir fry. The 200 daily miles undertaken by the volunteers fan out over two states and three counties.

And for many of the Meals on Wheels recipients, the food is nice, but the company is better.

“I think I almost like the people that deliver it better than everything else,” said Keith from the comfort of his front-room couch, Lake Tahoe sparkling happily through the window.

“We like the volunteers very much, very cordial,” echoed Tally, a self-described “cougar” for being a woman in her 90s married to Keith, who’s in his 80s. Keith and Tally have been part of the meal delivery for at least two years now.

In fact, the pair recently cemented why Michelle and Ty commit to volunteering on a regular basis. After gifting the senior couple a Christmas card, the Eidams arrived at the Kings Beach condo shortly after the holidays to a warm reception.

“They said they were going to keep our card forever because it meant so much to them, and they gave us back a card that said, ‘We wait for Wednesdays every week. It’s a high point,’” Michelle said. “That is exactly why we do it. We love them, too.”

(That’s not to say every single recipient is as welcoming; there are a few who prefer to take the food and quickly shut the door, avoiding extended niceties.)

Regardless, participating in the program has been eye-opening to Michelle and Ty, providing an understanding of what resources are out there for seniors, though they believe Meals on Wheels is something extra-special.

“You get a great meal, but there’s something so much more powerful with someone who comes by with a smile,” Michelle said between the 12 deliveries on our ride-along.

Meals on Wheels isn’t a low-income program, and Sierra Senior Services Executive Director Sharon Romack wants that point made clearly: “It’s based on medical need,” she told Moonshine Ink. “If you know of someone, if you think your neighbor could benefit, we’re interested to hear about them.”

To be eligible for the food delivery, Sierra Senior Services has a list of guidelines including that the senior must be lacking in two or more areas of “Activities of Daily Living:” bathing, toileting, dressing, eating, or transferring and standing for lengthy periods; and it also takes other medical concerns into consideration.

Bruce — who rocks skull belt buckles and has an affinity for garlic bread, of which Michelle and Ty always try to nab a loaf for him from the pile of SaveMart donations back at Sierra Senior Services headquarters — has received meal deliveries for over a decade now.

He gets two meals a day and frozen weekend meals on Friday; the Eidams explained it’s basically his only source of food.

“Without them I would starve to death, big time,” Bruce said.

Meals on Wheels relies on money from roughly 30% government funding (both state and federal), 40% fundraising, and 30% grants. Only a small part of the program’s funding is garnered from Meals on Wheels recipients, who are kindly asked for a $5 contribution per meal, though it’s not mandatory.

“We depend a lot on the kindness of the community because we don’t get enough from the government funding,” explained executive director Sharon. “If someone can’t afford to be on the program, we still feed them. We don’t turn anyone down. If they want to contribute, that’s great but it’s never a requirement.”

In reality, the donation money received shakes out to about $1 per meal, though to get a meal to someone in Kings Beach, for example, it costs around $7. Thus, government funds, grants, and extra fundraising efforts are needed to make up the difference.

Sharon said she hopes to talk local and state government officials into upcoming Meals on Wheels ride-alongs to show the need for additional funding. As things stand, the program receives no money directly from the Town of Truckee, Tahoe City, or Incline Village.

The local Meals on Wheels chapter doesn’t have a waiting list for wannabe participants at this time; in fact, Sharon said they’re about 50 to 60 people away from capacity.

“If there’s a need of someone’s being released from the hospital and has no one and isn’t able to get their own food, we make sure they’ve got a Meals on Wheels person there the next day,” she said. “As long as the need is there medically, we’ll make room for them.”