Home Sections Arts & Culture Will He Be the Last Dalai Lama? 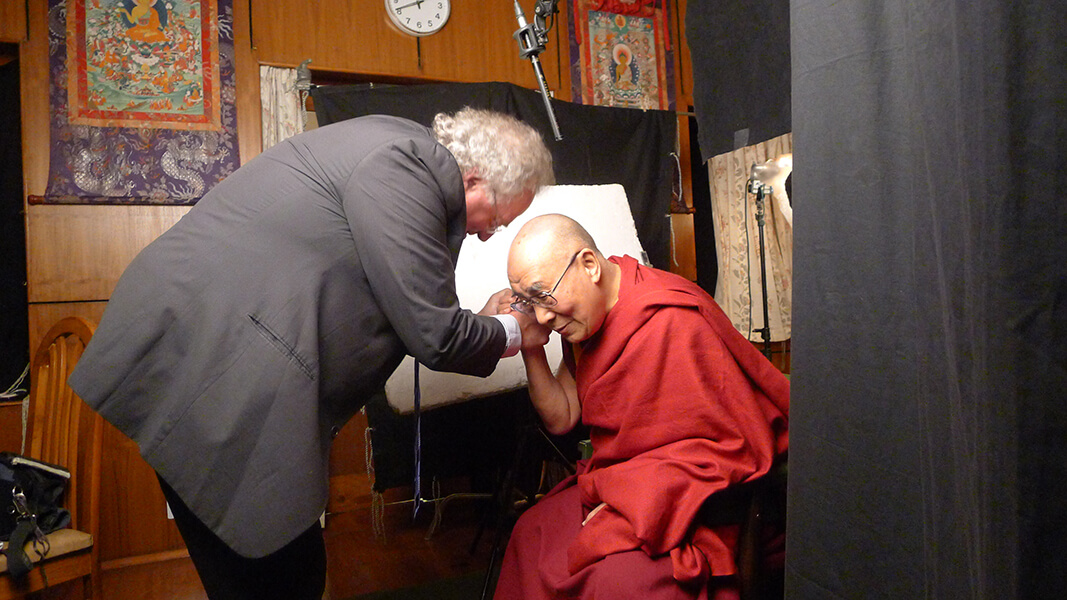 Producer/director Mickey Lemle first met the Dalai Lama in 1984 at a conference in Switzerland, 25 years after the Tibetan spiritual leader had been forcibly exiled from his country by the Chinese.

“I immediately thought that this would be a great subject of a film,” Lemle said. A few years later, the director got a chance to present the idea to the Dalai Lama.

“He looked at me with those wonderful eyes, and said, ‘Do you think this is a worthwhile undertaking?’

“‘Your Holiness, if I didn’t think this was a worthwhile undertaking, I wouldn’t spend my time doing it,’ I responded.

“And the Dalai Lama looked at me, then said, ‘You know, that’s a very American way of looking at it.’ Then he cracked up.

“After spending time with my Tibetan Buddhist friends after that, what I came to realize is that for a Tibetan Buddhist, the most important question is: what’s your motivation?”

“I missed that completely; it just went right over my head,” Lemle said. “I took the question into my ego and answered from there.”

Luckily the lama is the world’s most compassionate person, according to Lemle, and he had kindness for the director’s ignorance and said, “Well, let’s do the movie, but let’s do it soon.”

The project became Compassion in Exile: The Story of the 14th Dalai Lama, the first major movie made about the monk, released in 1992. The film introduced millions of people all over the world to the Dalai Lama and the plight of his exiled country, winning numerous awards and honors, including two Emmy nominations, and grand prize at the Earth/Peace Film Festival.

A quarter of a century later, both director and subject have moved into different stages of life. One crucial point for the Dalai Lama: a couple of years ago, the People’s Republic of China government passed a law saying they had to participate in the selection and training of any high lama, especially the Dalai Lama. “That sent a chill through all Tibetans anywhere and all freedom-loving people everywhere because … they don’t want a system totally devoid of any spirit,” Lemle said. The Dalai Lama has said he isn’t going to reincarnate, but has also said otherwise. The question remains unanswered.

To delve into this matter and more, Lemle has released another film about His Holiness, The Last Dalai Lama? that takes a fresh look at what is truly important to the 14th Dalai Lama in his 80s and the ongoing confrontation between Tibet and China. Myths and Mountains, an adventure travel company based in Incline Village, hosts a screening of the film on Sept. 30 with Lemle on hand to talk about the film.

Moonshine caught up with Lemle, who has been friends with the Dalai Lama for 34 years.

As he started to approach 80 … I sensed a kind of urgency in trying to spread his message to people. I thought, why don’t I magnify this by making a movie about it? What’s really important to him? In the film, we see his passions for neuroscience and understanding how the mind works, his work with interfaith dialogue, and the fact that he’s dealing with a very big issue, which is whether or not he’s going to reincarnate, whether there’s going to be a 15th Dalai Lama.

The Tibetan people have now spent 60 years in exile. Have you visited the country?

I haven’t, because I don’t know if I can get a visa at this point. I think I’m highly suspect. I would love to go (but) I didn’t want to do any filming there. Anyone I filmed there I would put in jeopardy and I think it’s irresponsible as a filmmaker to use people and maybe have their lives threatened for a shot.

If they were in a movie that was pro-Dalai Lama and anti-Chinese, they would be arrested, maybe tortured, for 20 years. Or maybe killed. The Chinese don’t mess around.

In what ways have you taken lessons from His Holiness that impact your day to day?

After the first movie, I could see my worldview shifted … it’s not just sitting with the Dalai Lama and asking him whatever I want … I get to sit and watch his response on my editing machine for maybe nine months … I treat it as my meditation … How many people in the world get to say that the world’s deepest philosophical issues are how they spend their days?

In descriptions of your current film, Tibetan Buddhism is referred to many times as a “science of mind.” Talk about this.

Yes, His Holiness said to me once, that Tibetan Buddhism is both a religion, with its traditions and rituals, but it’s also a science of the mind. It’s totally compatible with any other religion or even agnostics. You can understand how the mind works, without having to shave your head or wear robes.

In the movie, he talks about the fact that the Tibetans have for a thousand years held the wisdom traditions … for overcoming negative or afflictive emotions, like anger, greed, envy, violence, ignorance, sloth. He said, “We held that knowledge … and now it’s time to share it with the rest of the world.”

In Barack Obama’s July 2018 speech in South Africa, he said, “Right makes might, not the other way around.” I’m reminded of that when pondering the Tibetan plight. Is this idea something you’ve spoken about with the Dalai Lama?

It does seem to be … a shadow side of our culture that we’ve never successfully dealt with. It comes out with these bursts of racism. I think it stems from that initial tragedy that the white people perpetrated on indigenous people.

But in the case of Tibet, it’s an effective strategy. There are 6 million Tibetans and 1.2 billion Chinese. What are they going to do? Start an armed rebellion? … The idea of a nonviolent protest is a smart reaction. It’s very Ghandian, but in the case of India, the numbers were reversed. Name one other movement for independence and autonomy in the world that is nonviolent. It doesn’t exist anywhere else.

As board chairman of the Tibet Fund for 20 years, tell us about this organization.

From the moment a refugee arrives from Tibet into India or Nepal, they are met with something that the Tibet Fund funded: food, shelter, medical attention, school, scholarships, printing presses, eye clinics … It’s very gratifying to see the people it has helped.

Will He Be the Last Dalai Lama?
Education
7:00 pm