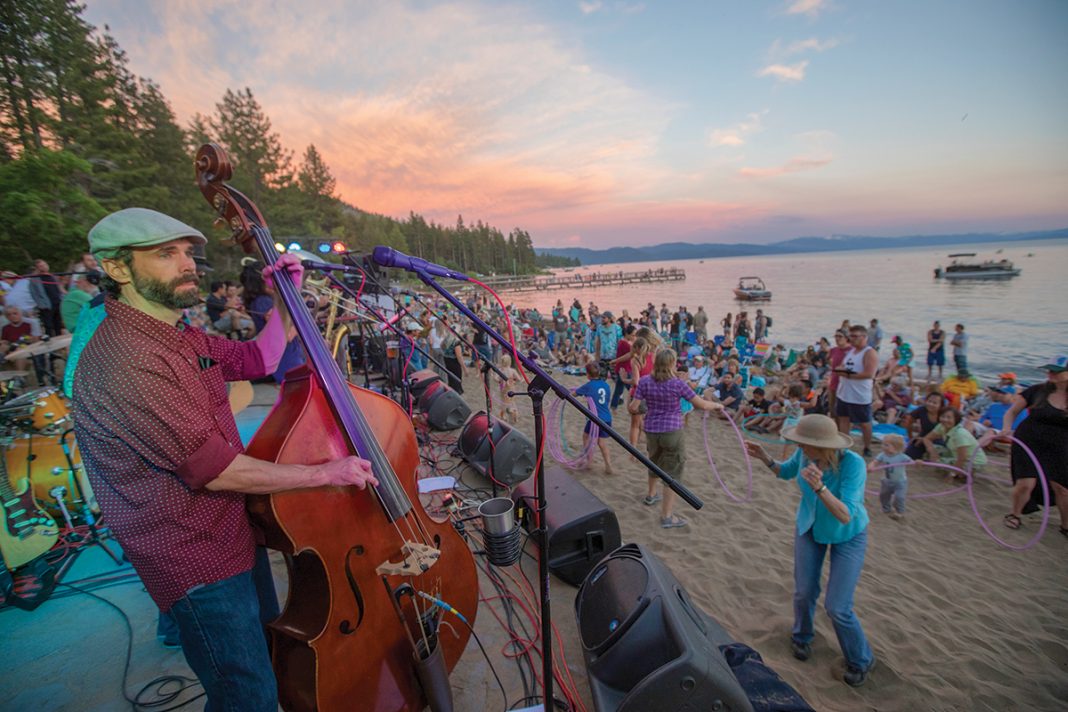 It just wouldn’t be summer in Tahoe without live music. Even though you still can’t go hear your favorite musicians in the flesh, there is a way to catch some of those groovy summer vibes that you can only get from watching a live show against the backdrop of Lake Tahoe in the evening.

The fine folks at the North Tahoe Business Association were already knee-deep in planning the 2020 Music on the Beach series when the coronavirus resulted in mass cancellations of countless summer events throughout the region. As closures and restrictions against large gatherings continued on, those planning the event waited in silence, until finally, after hearing expressions from many people wishing summer music would make its return, they decided to make it happen — virtually. Instead of bringing the people to the music, the NTBA decided to bring the music to the people.

“Music is such a big part of the summer in Kings Beach,” Music on the Beach planner Alyssa Reilly told Moonshine Ink. “We didn’t want to take that fully away.”

She and the rest of the team jumped into action and in three weeks’ time took the show on the road — from the beach to your streaming device of choice — bringing to you Music on the Beach: Virtual Vibes 2020.

“It was definitely difficult to figure out,” Reilly said of making the transition. While she admittedly knows nothing about streaming and how to broadcast, Reilly explained that many people involved with the NTBA and Music on the Beach do, and they came together to make it happen.

Relying upon the support of sponsors and vendors who are already spread thin made it a challenge to be able to pull off the entire nine-show series, so they reached out to the five most local bands on their roster. Sure enough, the musicians got on board. With four Friday night shows remaining this summer, you still have a few chances to catch some great tunes.

The first show featured Peter Joseph Burt & the Kingtide. Next up are The Sextones on July 10 and Vokab Company on July 24. Though based in San Diego, several band members hail from South Lake. The Blues Monsters play Aug. 7, and Kings Beach’s own Sneaky Creatures will wrap up summer, taking the stage on Aug. 28. But just where will that stage be, you ask? The bands will be livestreamed from the North Tahoe Events Center to your smartphone, tablet, or other streaming device. The shows will also be featured via live simulcast on KTKE 101.5 Truckee Radio. The events center, of course, will not be open to the public, and in the interest of health and safety, there will be roped-off areas to prevent folks from gathering.

“Kings Beach is so into the arts … this is so special to our community,” Reilly said, noting that the concept has gotten plenty of positive feedback with venues as far as Sacramento and the Bay Area looking to share the livestream. “We want to engage everybody together in a safe way.”

Make it a party and grab some takeout from any local restaurant. Donations to help offset costs are welcomed since there will be no bar or vendor sales this season. Get a commemorative cup with your donation of $25; $50 gets you a cup and a gift certificate to Alibi Ale Works. And stay tuned, because once life goes back to “normal,” Virtual Vibes just might continue with actual Music on the Beach performers being livestreamed right from the shore of Lake Tahoe.
Info: northtahoebusiness.org/music-on-the-beach