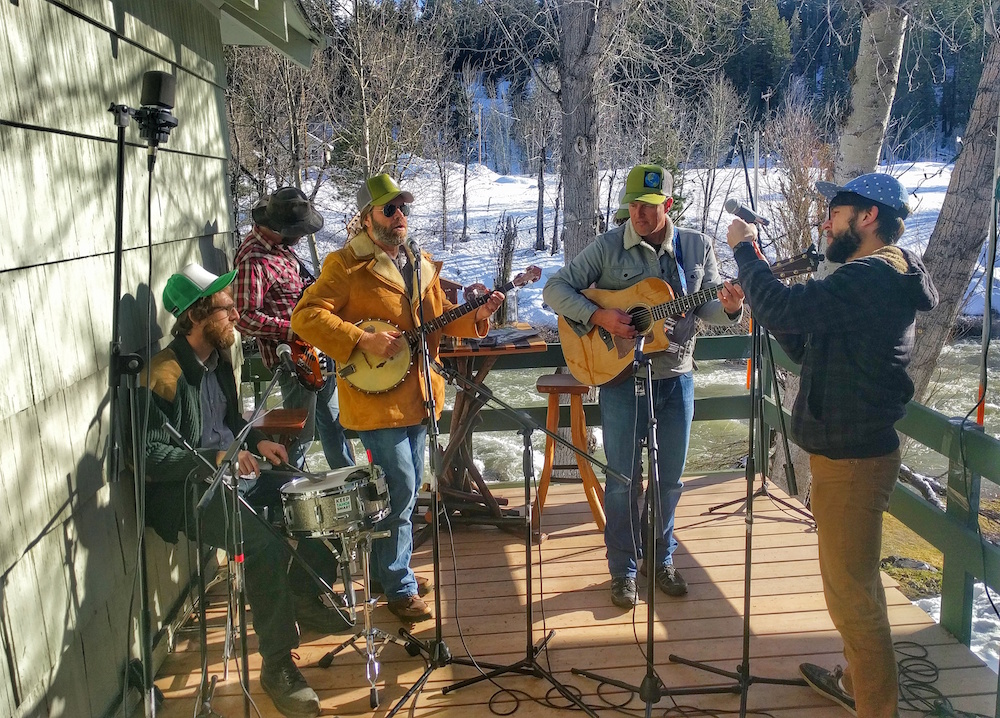 The guys of Poor Man’s Whiskey stopped by the Moonshine Ink office on a sunny Saturday in February to film the inaugural Tiny Porch Concert. Squeezing six musicians on the office’s 114-square-foot back deck, including mics and instruments, PMW played Like a River, a Kate Wolf song that sits near and dear to their hearts.

A few weeks later we jumped on the phone with Josh Brough, the band’s banjo player and co-founder, to chat about why Kate Wolf is so important to the band, where the name Poor Man’s Whiskey came from, and how it all got started.

Read the full interview below.

Can you tell me the story behind the Kate Wolf song Poor Man’s Whiskey plays in the video? Jason and I cofounded the band together and we used to go see a bluegrass band play way back in college [UC Santa Barbara]. Probably like 1994/5. It was a band called the Cache Valley Drifters and they introduced us to the music of Kate Wolf. We had never really seen people play bluegrass, with acoustic instruments, like that before — we were just blow away.

Jason and I went separate ways for a couple years. I went down to the Peace Corps in El Salvador and he made me a mixtape with a bunch of Kate Wolf songs and mailed it on down. I was living out in the middle of nowhere and the tape got stuck in the cassette player and that song [Like a River] was on repeat all the time, well the entire album was.

The music was really grounding for me. It reminded me of back home, being in northern California, with the wind blowing and the sound of a river. Everything about that song has become like our theme. We start off every show playing Like a River. It is our grounding song for everywhere we play — usually on the floor, but if not we do it on the stage.

Why did you choose to play that song — on our back porch on the Truckee River — for this video shoot? The river is right there and we thought it would be so fitting. We do have a couple of other songs that would be fitting too, like Snow in Tahoe or Sierra Girl.

But, Kate Wolf passed years ago and we’ve become really close with her family, her widower and her son and daughters, so we thought it would be really cool to have a video to pay homage to them.
We did an album of her songs but thought a video would be something to pay back all the love and opportunity they have given us. Kate Wolf wasn’t that well known, but is recently becoming well known — Lucinda Williams plays one of her songs.

So, you guys have a whole album of Wolf’s songs? Correct, it is called Like a River.

Going back to the founding of the band, was there a PMW before you went to El Salvador? We were in a different band. More of a southern rock jam, Allman Brothers-y, hippy southern rock stuff. Then I went to the Peace Corps and Jason got a mandolin and I got a banjo. We said we would each become proficient on these instruments and then, three years later, as soon as I got home we were going to start a bluegrass band.

So I literally showed up back in northern California on Jason’s doorstep and was like ‘all right let’s start the band’.

And the name? Where did it come from? I came up with the name while I was in El Salvador because I thought it was the perfect band name. Poor Man’s Whiskey is a hobo term for marijuana when they can’t afford booze they literally pick the leaves and stems of hemp off the sides of a railroad track and roll it up in newspaper and smoke it and pass it around. We don’t try to push that one too hard because drug references aren’t universal, but most people know it is a reference to marijuana.

Backtracking a little bit, how did Kate Wolf die? Kate Wolf died of leukemia in the ’80s. So we never met her, never anything. But now we’re friends with her family. They sort of adopted us as a band, and they all treat us nicely and are so thankful that we are carrying the torch of her music and we’re saying the opposite. People say ‘oh you’re just trying to make money off covering an album’ and it’s actually the opposite, we lost money making that album.

Anything you want to add? We want to make sure that it is known that this is a Kate Wolf song. The root of our band really is her music. The whole idea of doing Poor Man’s Whiskey came from Kate Wolf music.

And, there is just something about a river — the grounding feeling of a river and I think that song just really captures it.

It’s high on a mountain, the warm winds are blowing
And where the winds are blowing to there ain’t no way of knowing
The mountain grass is short, it’s dry and close to burning
Crying out for water as the season’s turning

Poor Man’s Whiskey: There’s Something About a River
Music
6:00 pm

Poor Man’s Whiskey: There’s Something About a River
Music
6:00 pm

Poor Man’s Whiskey: There’s Something About a River
Music