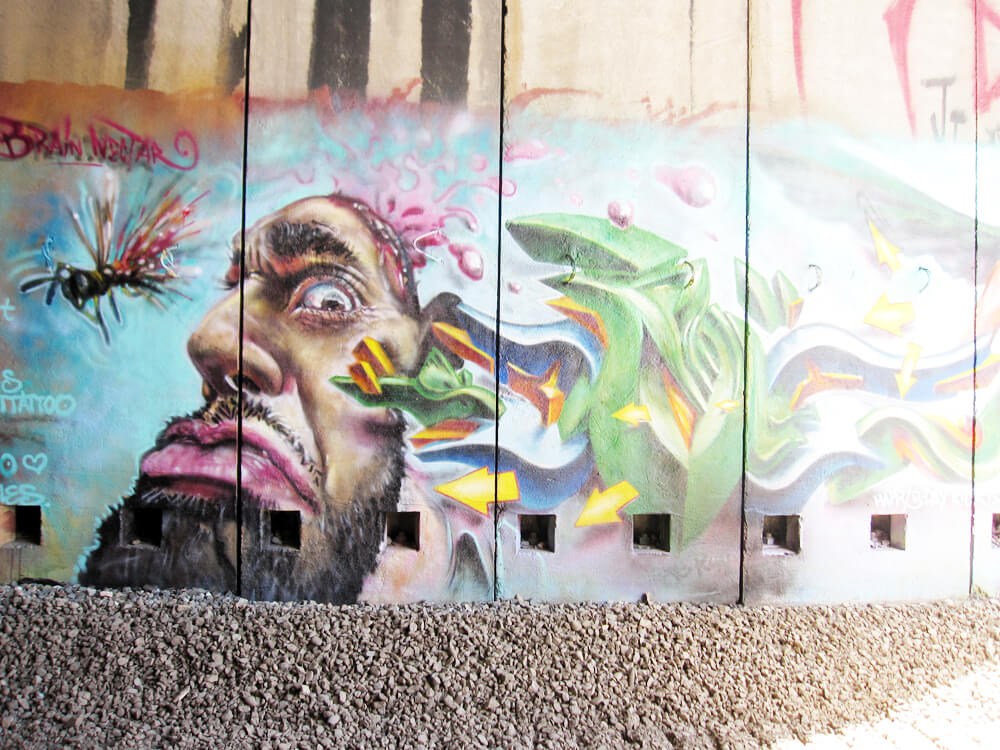 There’s an interesting juxtaposition at Donner Summit. Hiking up toward the train tunnels from Old Hwy 40 just east of Rainbow Bridge, a plaque points to petroglyphs on the gently sloped granite. If the sign weren’t there you’d likely step on the faint, ancient markings. Just slightly farther up the hill, in the abandoned Pacific Railroad train tunnels, a more modern mark has been left — in the form of graffiti. How you look at the two markings depends on who you are, and perhaps what you’re looking for.

I was looking for graffiti. I’d heard of the painted tunnels for years but had never ventured up into them. As Tahoe isn’t home to much graffiti or street art, I was excited to see what I would find. The petroglyphs were a pleasant surprise en route. Estimated by archeologists to be 1,500 to 4,000 years old, according to the Donner Summit Historical Society, the 200 some rock-art elements include a bear track and various geometric shapes. We know who made them and their method — ancestors of the Washoe pecked at the rock with a tool called a hammerstone — but we don’t know their significance. Perhaps these petroglyphs had spiritual or ceremonial purpose. Or perhaps they were created for vanity, posterity, or creative expression.

Up in the abandoned train tunnels, much of the graffiti is an expression of vanity, what people call tagging — names and dates and profanity scrawled in black, red, and green. But if you walk east through the long, first tunnel, some more skilled art appears. The tunnels are dark but rarely pitch black, at least as far as I walked. On a weekday, it’s a bit creepy with the cavernous, towering concrete walls and water from snowmelt dripping and flowing on the mud and gravel ground. Over Memorial Day weekend, it was less scary and more touristy, with groups of friends and families walking through.

The best piece I found takes up much of the right wall as you enter the second tunnel to the east. A bearded face of Dalí-esque proportions and a naked woman’s body with a bird head and wings are joined by wildstyle, three-dimensional type. Wildstyle graffiti is defined as type so stylized it’s difficult to read. Here, it appears to spell Segen, which a Google search shows as Streetfiles.org, an independent street art and graffiti photo community that disbanded in April 2013. All their websites now say, “SORRY, WE’RE DEAD,” and point to a somewhat active Facebook page. Whoever made this piece, he, she, or they are surely plugged into social media. Painted right next to the art is an Instagram logo with various hashtags and handles beneath it: #graff, @rickywatts, and @vader66art, to name a few. There’s even an email address tagged on the wall.

But it doesn’t matter who made this or why. The hunt and the find is what’s fun for me. While these modern-day markings will not last as long as the thousand-year-old etched petroglyphs, it’s fun to wonder how long they’ll endure and if future archeologists will speculate about what they mean and why they were made.

“I like to say (facetiously) that I am philosophically opposed to LNT [Leave No Trace],” wrote retired National Park Service archeologist Don Morris on a Backpacking Light online forum regarding graffiti, “because if we stop leaving ‘traces,’ what will future archaeologists do?”

When it comes to leaving traces, at what point does trace or trash become artifact? Is leaving a trace (graffiti) on a trace (concrete tunnel) all that bad? It pains me to see the mess the railroad has left on the summit: tons of train ties, rusty nails, and concrete forms left to rot. There’s so much debris on the mountainside that it’s difficult to even take a hike below the tunnels. But in my opinion, the graffiti (at least the more art-worthy elements of it) make the monstrosity somewhat more bearable. Street art and graffiti are often called out as aggression toward urban spaces, the artists lashing out with paint at the structures they feel alienated by. In this way, I think graffiti is very appropriate for this abandoned, man-made space marring the mountain.

The Traces We Leave
Arts & Culture