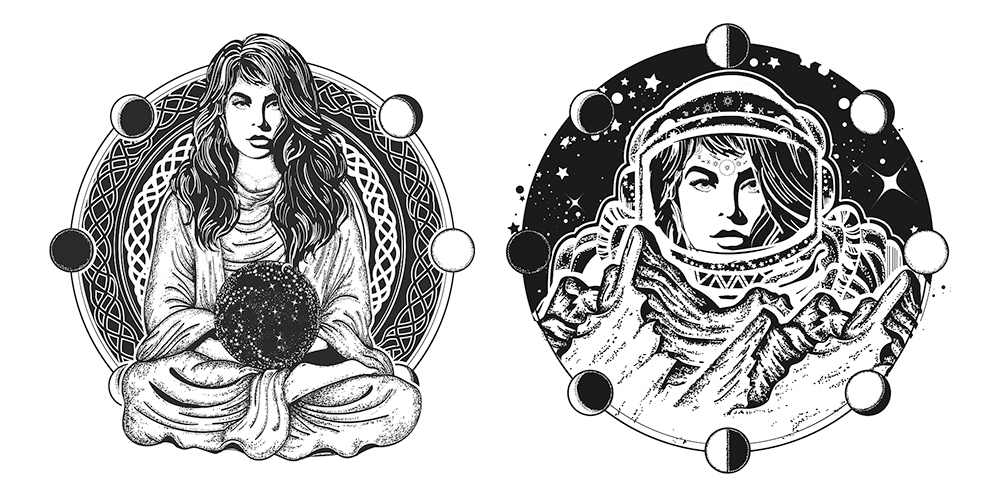 Although Mercury retrograde gets all the press, all the planets have their own retrograde cycles. These periods are marked by a planet’s apparent backward motion in our sky. These are times when the planet’s archetypal expression is reversed, stalling its outward momentum and turning its energy inward. On April 11, Jupiter kicks off the next retrograde season, with Saturn and Pluto following by the end of the month. These larger planets have longer retrograde cycles, and their own inherent meaning. Jupiter presides over the social institutions that codify our morals and beliefs, including universities and churches. So, Jupiter retrograde provokes a re-evaluation of our guiding philosophies. Saturn is the planet of restriction and practicality. In retrograde, Saturn encourages us to examine ourselves with a disciplined focus to cultivate our own inner authority. Pluto’s energy is about power. Of all the planets, Pluto is most connected with the “shadow self,” and in retrograde helps us to uncover the forces of our unconscious that motivate our actions. By consciously utilizing these cycles, we are able to engage more effectively with the world around us.

The Lyrid meteor shower is coming up, offering plenty of opportunity to make a wish upon a shooting star! Meteor showers are predictable, annual events that occur when Earth’s orbit intersects a belt of cosmic debris. Each is named for the constellation that is home to the specific meteor shower’s “radiant point.” The radiant point is the location in our sky from which the meteors appear to radiate outward. The constellation Lyra, also known as the harp, will play host to April’s meteor shower. The radiant point will be near the fourth brightest star in our sky, Vega. This star is significant in that many thousand years ago, and many thousands of years in the future, Vega was and will be planet Earth’s North Star. (This is because Earth wobbles as it rotates on its axis.) To find Vega, look to the northern sky and seek out the bright star with a bluish hue that lies higher up and eastward of Polaris, the current North Star. It is from here that the shooting stars of the Lyrid meteor shower will appear to emerge. The shower will be visible for a few days, but the best time to view will be in the early morning hours, when Vega will be highest in the sky. The shower’s peak will be on the morning of April 23. Happy hunting, and may all your dreams come true!