Astronomy | The month of April is prime time to see the constellation Hydra swimming across the sky. Hydra is the largest of all the 88 constellations recognized by the International Astronomical Union. While the constellation and its serpent imagery date back to Babylonian times, it gets its name from the Greek myth of Hercules, who slayed the monster as one of his 12 labors. The celestial Water Snake extends south of the ecliptic, along the celestial equator. Its head, a small cluster of stars forming a small circle, can be found underneath the constellation Cancer (see last month’s edition of the Stars for how to find Cancer). From there, Hydra zigzags in a southeastern direction, stretching beneath Leo and Virgo with its tail near the Libra constellation. Although large, Hydra is easy to overlook, for it is not particularly bright and slithers low across the sky. Its brightest star, Alphard, is known as the Heart of the Snake. Alphard is located beneath Regulus, the Heart of the Lion, in the constellation Leo. Look for its characteristic orange hue. Hydra is best visible in the southern sky around 9 or 10 p.m. through the month of April and into May.

Astrology | Eclipse season is here again, with a partial solar eclipse in Taurus on April 30 and a total lunar eclipse in Scorpio on May 15.* Since the start of 2022, eight of 10 astrological planets consistently occupied three successive signs — Capricorn, Aquarius, and Pisces. The slower moving outer planets remain in aspect to the outlier, Uranus, while the speedier inner planets are now moving toward and into the Fixed Earth sign. The Taurus-Scorpio axis is one of possession and resources, wealth and value, beauty and sensuality. The planet of disruption, democracy, and technology, Uranus in Taurus has shaken up the economy through the emergence of cryptocurrencies as well as through the pandemic with a viral illness. Last year, the lunar north node shifted into this sign, where it will remain for another two years, emphasizing the karmic significance on these events. In uncertain times, utopian schemes are tempting, but rarely satisfy. When every heart feels like a raw nerve and every tongue a live wire, focus on grounding practices that soothe the bodily senses. As we move through Taurus season, tend to the garden of your soul and endeavor to create an oasis within. Add value to your life and community by cultivating beauty and appreciation thereof.

*The solar eclipse will not be visible from the Tahoe/Truckee area, but the lunar eclipse will be! The eclipse will have begun already when the moon rises around 8 p.m., with totality from 8:30 to 10 p.m.

~ Dawn Andreoni is a yoga teacher and astrologer living on the North Shore of Lake Tahoe. You can find more about her offerings at celestialdawnastrology.com or follow her at facebook.com/astronotions. 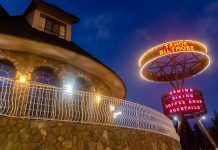