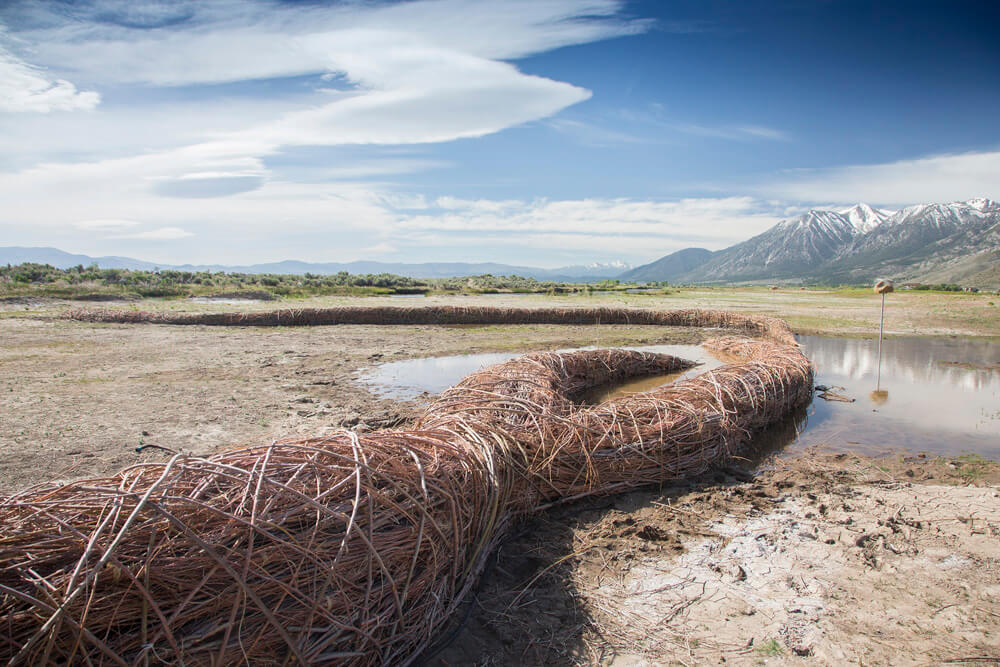 Science, environmentalism, and art hold hands in the Nature of Art Project at the Nevada Museum of Art, running now until April 5. In a time when watershed sustainability is a focus given our current drought-related concerns, environmental artists Daniel McCormick and Mary O’Brien bring to the conversation a unique body of artwork that’s based on science and designed to heal the Earth.

Taking to landscapes from California to Louisiana, the Marin County-based artists create earth art aimed at reversing human impact on the environment. The artists call it the Watershed Sculpture Studio.

“We research a site, a habitat, a micro-environment, and with the help of the restoration scientists we create art that brings that conservation value to the site,” said O’Brien.

McCormick and O’Brien teamed up with The Nature Conservancy and NMA’s Center for Art + Environment two years ago on an exhibit called the Nature of Art, an initiative of the Watershed Sculpture Studio. In addition to photos, video, and pieces of sculpture that illustrate the artists’ careers, the exhibit includes a 360-foot long willow branch sculpture along the Carson River in the River Fork Ranch Preserve, which the art duo built in 2014.

“We think of it as art that walks in the world,” said Amanda Horn, NMA’s director of communications.

Over time, the woven branches will integrate into the environment, prevent erosion, and restore the watershed’s delicate ecology. McCormick and O’Brien will build a similar sculpture on the Truckee River at McCarran Ranch, scheduled to be complete by May. The impermanence and changeability of the team’s art makes it both fascinating and functional, and is why some call it earth art.

“It truly is a living piece made out of living plant material,” said Duane Petite, The Nature Conservancy’s Carson River Project director. “But it’s going to change.”

According to McCormick, the Carson project corrects the U.S. Army Corps of Engineers’ straightening of the river, done in the 1950s to prevent flooding. Unfortunately, reshaping a river’s course kills the ecosystem because it changes the flow and doesn’t allow the water to spread and sink, a necessity for thriving vegetation. But the two artists, along with the conservancy and the museum, are trying to reverse that.

“With collaborations such as this, artists are asked to walk in the world, interact with the world physically, create something, and then give us the trace of that activity to help create a culture of sustainability,” said Bill Fox, director of NMA’s Center for Art + Environment.

The Nature of Art Project
Community
12:00 am

The Nature of Art Project