Home Sections Arts & Culture The Man Behind the Music 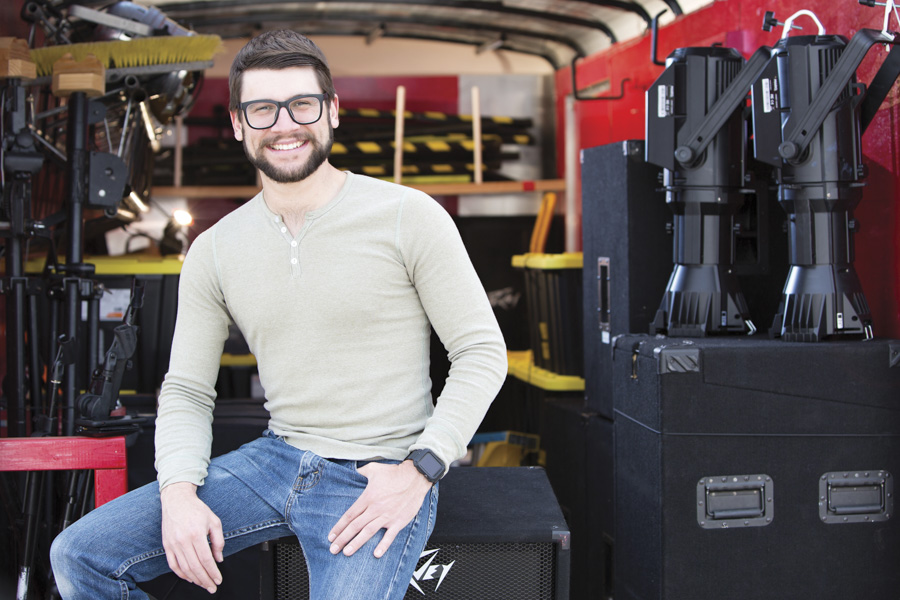 Some people get all the glory. The lead singer, the star of the musical, the prima ballerina; it’s easy to recognize their talent and efforts on stage. But what about all the people who make the magic happen from behind the scenes?

Danny Sturtevant of Evant Productions began his path to become a sound and lighting technician at a young age.

“I grew up with the Tahoe Truckee Youth Theater,” he says. “My mom would record soundtracks for the show on a Korg synth. We went through all the different recording devices from MR-8 to Mac Mini. Our first synth even took floppy disks which now hang on the wall as [an] art piece.”

When he was in high school, Sturtevant built a recording studio in a shed in his parents’ backyard. After undergoing several iterations and upgrades throughout the years, he currently utilizes the space to produce soundtracks for theater performances throughout the greater Tahoe/Reno area.

“I think sound work is really gratifying because there is so much you can do in post-production,” he says. “With video and lighting you’re stuck with what you get the first time around. It’s nice to be able to edit stuff after that fact.”

In December, Sturtevant composed and recorded an original soundtrack for “Jacob Marley’s Christmas Carol” at Reno Little Theatre. His work for previous productions at Truckee Community Theater, InnerRhythms Dance Centre, and Truckee Dance Factory had been based primarily on pre-recorded sound effects.

“I’d played with [composition] before, but never for an audience,” he says,“so that was a big step for me.”

As the general sound designer on set, Sturtevant was able to observe the actors during rehearsal in order to identify the emotional range of each scene. He then took those notes back to his studio, working to replicate the wide range of moods on his synthesizer.

“Essentially, I was able to make a backing track for every emotional moment in the play,” he says. “I just played around until I got what I liked.”

Being able to translate emotions directly into sound probably doesn’t come naturally to most people. It helps that Sturtevant has been involved in theater as an actor for over twenty years.

“Getting a read on those kind of things is second nature for me,” he says. “You can augment a sad scene even with light eerie music as a juxtaposition. Sometimes, it can be very subtle.”

Sturtevant was born in Greenbrae, a small Marin County community, before moving to Tahoe when he was five months old. In 2009, he graduated from Truckee High School where he was an active participant in the theater program. After a brief migration to Southern California, he returned to earn a degree in Business Management from the University of Nevada, Reno.

“For me it’s all about connections,” he says. “The mentality of people is different here. It’s more appreciative, less ‘gimme gimme’ and more about sharing back and forth.”

Sturtevant grew up in a service-oriented family. His mother was a teacher and his father a nurse — both were amateur musicians on the side.

“It’s seeing the people smiling and helping out that’s awesome,” he says. “I think there’s a higher appreciation for your work. I’ve done a bit of corporate stuff, too. Maybe it’s because you’re charging more, but it seems like a more thankless job.”

Sturtevant will be departing his role as assistant technical director at Little Reno Theatre in June in order to focus his energy fully on Evant Productions.

“It’s the gamble of actually going for it,” he says. “What I’m doing right now is the nice responsible thing to do. Even if it’s low, it’s guaranteed income. It’s the grown-up thing to do, but I don’t feel like a grown-up. I think I could strive for more.”

And while a drive for creative control is at the forefront of this move, Sturtevant’s long-term intentions are still rooted in community.

“I’m looking forward to having a physical location for Evant,” he says. “I like the idea of freedom in any organization. We could do a lot of things with rentable space and maybe bring back the children’s theater on a different level. I’d also like to teach youth about technology and find a way to make the nerds be just as cool as the jocks.”

You can check out some of Sturtevant’s work for Moonshine Ink at our Tiny Porch Concerts YouTube page.

The Man Behind the Music
Sports & Outdoors / Wellness