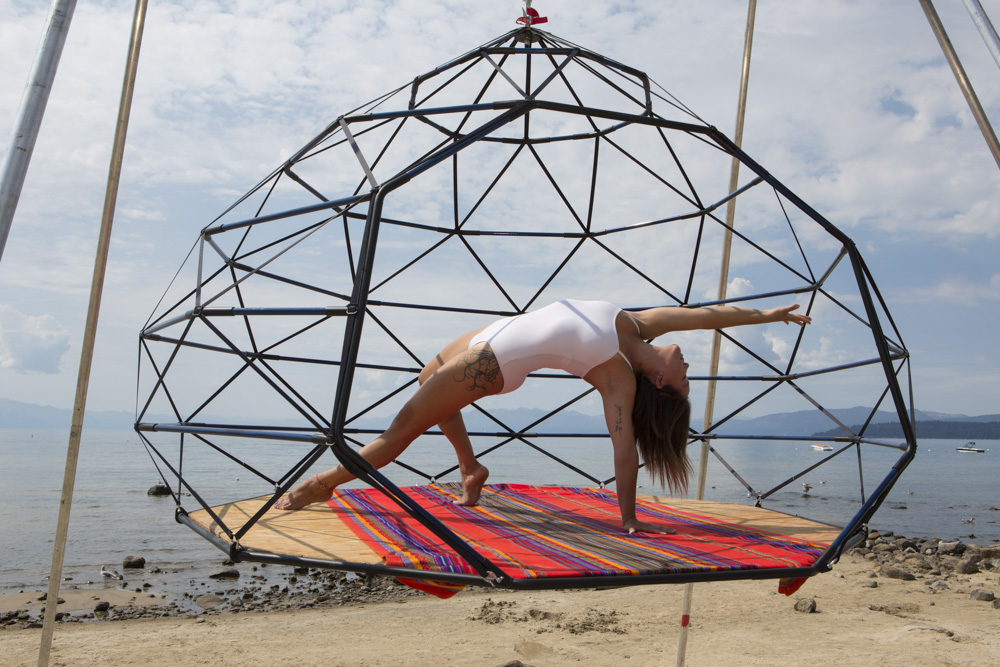 Tahoe Flow Arts has stepped up A Day of Healing Arts for its third year, thanks in part to a marketing grant from the North Lake Tahoe Resort Association. An impressive schedule of yoga workshops and classes is paired with two performances from the Tahoe Flow Artists, live bluegrass by No Deal, shopping and sustenance, and massage and skin care during the daylong event.

Participating in the main workshops, spread between the beach, studio, and grass, costs $45 though there are also free mini-classes and lectures during the day. The ticket cost reflects a major addition this year: big names in the regional yoga world will lead workshops, including Tahoe’s Shari Beard, the Nevada City-based aerialist known as Juice, and Reno’s acroyogi Anastasia Bobadilla.

“I like that we’re collaborating with our surrounding areas this year,” said Kelly Smiley, owner of Tahoe Flow Arts Studio. “It’s definitely a huge step up from last year.”

Also new this year is high-caliber performance art. The Tahoe Flow Artists will showcase two of their performance pieces featuring special guests and demonstrating what the studio teaches and fosters, and what’s to come.

“The theme is the seven deadly sins; we’re integrating that into the seven chakras of yoga,” Smiley said. “That’s what we really stand for as a studio, especially all the performers; they all have a story to tell through performance.”

Beginner workshops like Intro to Acro and Intro to Climbing for Aerials teach strength-building from the ground up, and work towards Smiley’s goal of eliminating the fear that many people have surrounding acro and aerial work. For the more advanced, there’s a smattering of challenging workshops that promote play, dance, and yoga. Offerings include Advanced Momentum Studies for Aerial Lyra (hanging hoop), Acroyoga Inversions, Arm Balances and Inversions, and even Twerkasana, which combines yoga, hip hop dance, and acroyoga.

“A lot of people get bored with yoga or don’t like it, so for me it’s fun to incorporate dance and make it more lighthearted,” said Meredith Calderas, a Flow Arts instructor and the studio’s media marketing coordinator. “This event is so great because it’s very centered on our own power as humans and using our bodies to tell stories, to work out, and to create and express yourself. And you can be part of a really awesome community.”

Get In the Know About What’s Going On: NLTRA First Tuesday Breakfast Club, Good Morning Truckee

Smooth Skating: Lace up your skates and hit the ice