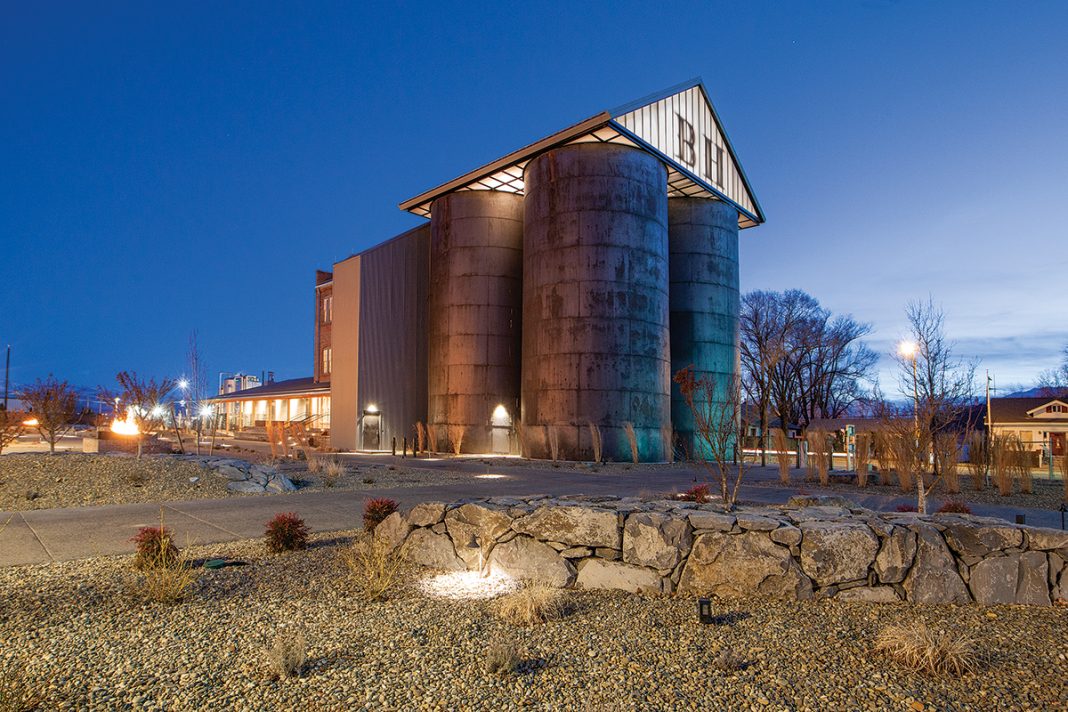 While the state of Nevada is full of spirit, distilling alcohol only became legal in 2013 with the opening of Las Vegas Distillery. Since our last coverage of the state’s four other first-ever legal distilleries in 2015, the Lake Tahoe/Great Basin region has more than doubled its craft liquor production facilities.

Standing out through innovation, creativity, and process proves essential to making a name for oneself in the area’s growing distilling community. However, one thing is universal: Each distiller puts their blood, sweat, and tears into their cuts of heads, hearts, and tails.

That’s because “grain-to-glass” isn’t just some marketing ploy. Nevada state law regulates that a distillery must make spirits in its own facility from 100% raw agricultural products in order to be designated a “craft distillery.” This means your Nevada craft distiller has a finger on every step of production to ensure the quality in your glass. (California distillation law merely requires a special permit, with hefty fines associated with creating or possessing “moonshine,” aka unlicensed distilled spirits).

The definition of “craft distillery” blurs across state lines, but the mission of bringing the best spirits to consumers remains. And the movement continues; in a 2018 report, the American Craft Spirits Association projected that the value of the craft distilling market is growing 29.9% annually.

“Old Trestle is a bridge from the past to the future. Distilling itself is a dichotomy between an alchemic past and ultra-scientific future.”— Old Trestle Distillery

Founded in 2014 by a group of local friends with a passion for craft spirits, Old Trestle Distillery came under management by Truckee Craft Ventures in 2018.

As Truckee’s first modern distillery in over 100 years, Old Trestle combines local ingredients with a global perspective. Their first two spirits, award-winning Theory Gin #001 and Theory Gin #002, display that duality as a pair: Theory #001 speaks of springtime and newness, containing “floral notes from wild California rose hips that grow along the Truckee River” and Theory #002 shows its ancient side as it is “inspired by Chinese culinary traditions” with the addition of green tea.

Old Trestle is the only distillery actually manufacturing spirits in Tahoe. And while staying local is essential to their mission, master distiller Jake Holshue (who serves on the ACSA’s board of directors and has distilled professionally all over the country) warns that this aim “can’t take away from the primary goal: the quality of flavor. We use local ingredients as much as possible, but not everything we use can grow in these mountains.”

Even though Old Trestle produces in California — outside of the Nevada craft distillery law — they still follow the rule of grain-to-glass with certain spirits like their “red corn four-grain bourbon” that’s 100% California agriculture including spirit-specific barley from Admiral Maltings, a craft maltster in Alameda.

Holshue gives off an enthusiastic mad scientist vibe, which translates to his innovative work. Besides a corn-based, pure “Sierra Vodka,” more creative examples include: distilled brandy that was originally smoke-tainted wine from the Tubbs Fire (which will be used to fundraise for California wildfire victims), distilling FiftyFifty Brewing’s famed Eclipse series, and experimenting with squid ink and duck breast in gin. Holshue wants consumers to know that not all gins taste like London Dry.

Old Trestle hopes to be one of the many reasons people to visit Truckee/Tahoe (once it’s safe, of course: Old Trestle is taking the coronavirus pandemic seriously and has generously been using their equipment as a vital community provider of free hand sanitizer).

A bourbon, four more gins, a locally harvested absinthe, expanded distribution, and a tasting room/restaurant on West River Street are all in the works.

“Zero torr is the absolute vacuum of space. Atmospheric pressure in Reno is about 650 torr. We can take the vacuum in our system down to 10 torr.” — Head brewer and distiller Melissa Test

When you can’t choose between opening a brewery or a distillery, why not do both? That’s what co-owners Will Whipple and Randy Soule — who built the proprietary vacuum distillation system — of 10 Torr Distilling and Brewing did in 2017.

Distilling equipment screams steampunk, which is fitting since 10 Torr started as a passion for homebrewing hundreds of gallons of beer to give away at Burning Man. Now, they’re bottling a line of spirits and canning both beer and cocktails commercially for the Northern Nevada community and beyond.

What makes 10 Torr unique from other distilleries is in the name: Their “hand-built proprietary vacuum distillation process occurs at extremely low pressure — 10 torr,” said head brewer and distiller Melissa Test. This allows distillation to happen at a much lower temperature than normal and avoids overcooking delicate flavors by “eliminating unwanted chemical reactions, allowing for a smoother, cleaner, fine-tasting spirit where the natural and fresh aroma shines through.”

In the same spirit, quality local ingredients are essential to 10 Torr’s mission. They use Old World Coffee Lab for their coffee liqueur, Apple Hill cider in their seasonal spiced apple canned cocktail, Bently Ranch corn for their Mexican lager, and other key mixology ingredients that come from the Great Basin Community Food Coop’s Distributors of Regional and Organic Produce & Products Program.

The setting at 10 Torr matches this resourceful mindset. Acquired as an abandoned medical facility, the founders stripped away plaster and linoleum to expose brick walls and the building’s original 1938 wood flooring to “preserve the beauty of the building,” Test said. The taproom’s modern elegance is a far cry from creepy institution.

That’s what true craft is: taking raw resources and transforming them into an awe-inspiring or delicious product, not buying premade spirits and rebranding them as your own, Test said. She thinks too few consumers know the importance of Nevada’s craft distilling law. “When you’re drinking a craft spirit made by someone here in [Nevada], you know the makers put their time and heart into the product,” she said.

“The overlap between tradition and state-of-the-art is where the magic happens.” — Master distiller John Jeffrey

“Distilling” doesn’t even begin to describe all that’s happening at Bently Heritage Estate Distillery in Minden, Nevada. As an estate distillery under Nevada state law, Bently must grow at least 85% of their grain for producing spirits. Therefore, their specialties — spirits and steaks — involve a huge operation: raising cattle and growing grain, 10,000-ton silos for grain storage, a malting facility, multiple state-of-the-art stills, and barreling and packaging facilities.

And we haven’t even gotten to the tasting part yet.

Bently Heritage Estate Distillery truly embodies “grain-to-glass.” At one moment, you could be on a ranch ride gliding across the estate’s 60,000 noncontiguous acres of mostly high desert agriculture, gazing at the snowy Sierra Nevada that supply most of the ranch’s water — and later in the day, you might find yourself in a restored LEED Gold Certified national historic building overlooking Minden, discussing American single-malt with the passionate people of Bently while sipping on a cocktail. This is the Bently Heritage legacy.

Bently operates under vertical integration agriculture — everything is start-to-finish on the estate. As “stewards of the land,” their strong beliefs in sustainability and accountability combine with embracing modern technology and automation, resulting in a unique way of ranching. Bently is also home to Nevada’s largest composting facility (open to the public), a seed bank for heirloom grain varieties, and a greenhouse for gin botanicals. Plus, they use electric-powered UTVs and plant-based packaging for beef shipments. “We’re makers, not markers,” Bently Ranch sales and marketing manager Woody Worthington said.

On the distillery side, operations are equally obsessive. Stills and fermenters are separated by style of spirit, and two different barrelhouses age whisky in climates controlled to Scotland and Kentucky, respectively. The intricate attention to detail in the piping design within the walls of the distillery match the painstakingly restored original brick and wood of the old mill and creamery that will be preserved for generations.

What makes Bently so memorable is the hospitality; you can’t feign passion like this. From quality assurance to maltster, they’re glad to be part of this legacy. You can find Bently’s spirits and steaks at most farm-to-table restaurants in the Carson Valley and Reno area, but you’re going to want to see this place for yourself.

Main Image Caption: WITH THE GRAIN: Bently Heritage Estate Distillery stores its grain in 10,000-gallon silos on the premises. All courtesy photos.