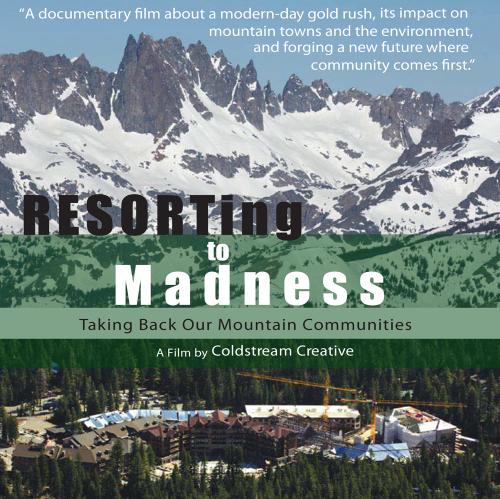 Last fall, locals Hunter Sykes and Darren Campbell were editing their film, six days a week, for two solid months. They had interviewed 42 people from mountain communities across the nation and had 50 hours of raw footage.

‘We were close to cracking at times,’ Darren said. But they persevered and presented the world premiere of their film, ‘Resorting to Madness: Taking Back Our Mountain Communities,’ at Nevada City’s Wild & Scenic Film Festival in January 2007. The film explores the impacts of the modern ski resort industry, saying it is a modern-day gold rush, where ‘poor planning, economic disparity and sprawling development’ are destroying the environment and local communities.

The filmmakers interview activists and experts in the industry and look at development in Mammoth, Sundance, Vail, Jackson Hole, Whistler, Truckee and more. A recurring trend (as we know here in Tahoe) is vibrant locally based villages being replaced by what are essentially ‘land-locked cruise ships.’

Because of its excessive development, elitist air and assertive business tactics, ‘Vail is often singled out as the antithesis of what mountain communities should be,’ the film says. The filmmakers requested interviews with Vail, but were denied.
But all is not lost – some resorts are doing it right, the film says. Sundance ski resort represents the alternative ethic, where emphasis is placed on environment and local communities rather than profit. Sundance granted an interview with the filmmakers.

Hunter took the film on tour of the west this spring. The film was received well, especially in other mountain communities, such as Crested Butte.

John Eaton, President of Mountain Area Preservation Foundation (MAPF), saw the film at Squaw on February 9. After the film, there was an animated discussion, he said. ‘I wanted to show the film again and engage more people in a discussion.’ MAPF is hosting a May 4 screening in Truckee.

‘Tourist-driven economies are making communities not healthy and not sustainable by making housing unaffordable for residents, turning the majority of jobs into low-paying positions, and creating a large segment of homeowners who are not present and not involved,’ Eaton said. ‘Resource extraction is an old and dishonored tradition in the west. The resource being extracted now is land. Our open space is being consumed for houses for people that are not going to live here.’
Mentions of solutions are brief, but the film issues a strong call to action, saying citizens must be engaged – that means talking at local government meetings, not just the corner bar. In the film, Stephanie Olivieri, long-time Truckee local, says developers typically ask for way more than they think they can get – if no one is holding public agencies accountable, the developers will often get exactly what they want.

This is why people need to be more engaged and pay more attention, Darren said. ‘It is difficult and we are all busy, but it is too important to just brush aside.’

Upcoming Local Screenings
April 20: South Shore, sponsored by the Sierra Nevada Alliance, 7:30 p.m.
May 3: Tahoe City at Sawtooth Ridge Café, 7:30 p.m.
May 4: Truckee, sponsored by MAPF, Community Rec Center, 7 to 9 p.m., $7
All screenings to be followed by a discussion geared towards the issues and how they affect the local area – hopefully with an emphasis on solutions, said Darren.
Info: 530-581-0293, coldstreamcreative.com