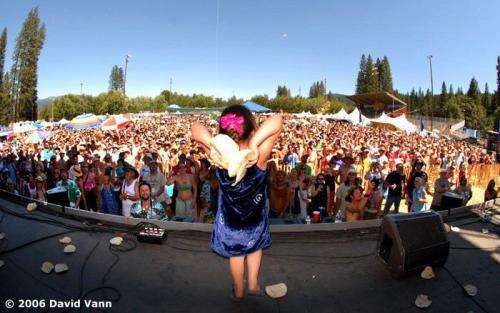 ‘The real beauty of the High Sierra Music Festival is that a lot of people look at the lineup and say, ‘I don’t know half of these names,’ but everyone leaves with a new favorite,’ said Dave Margulies, one of the founders of the Festival. ‘They’ve learned that we have a great sensibility in finding music. People trust that we will deliver.’

How do they develop one of the most eclectic line-ups in the country, all in the little town of Quincy, 70 miles north of Truckee? ‘We fight a lot,’ Dave said. The selection process takes six months, from October to March and is contentious at times, but ‘it makes for a better festival in the long run.’

There are 75 artists on the line-up this year, including Martin Sexton, Les Claypool, Eric McFadden, Tea Leaf Green, Galactic, Soulive, Yonder Mountain String Band, Disco Biscuits, Drive-By Truckers, Mavis Staples, Garaj Mahal, The Slip, and Leftover Salmon. And these are just the names you might recognize. Be sure to check out the ones you don’t.

In a May 13 New York Times article, writer Ben Sisario compiled a round up of summertime stages to be sure to hit. First on the list? High Sierra Music Festival. Of course, he started the list with California, but he featured only three in the state and makes special mention of the tight-knit atmosphere at High Sierra.

The intimate nature is one of the festival’s banner characteristics. The producers never sell more than 8,000 tickets, so add to that the event staff, guests, artists, and hundreds of volunteers, the total attendance is usually around 10,000 – a nice number to keep things lively but not overbearing. Dave gives the credit to the attitude and mindset of the people who end up on the fairgrounds; there are many repeat attendees and staff, the intimate vibe is contagious.

‘High Sierra is a musician’s festival because they have the time to hang out and relax with friends, it’s a time to creatively mingle,’ Dave said. The big thing at High Sierra is ‘cross-pollination’ where artists mix with guests and with each other. Artists’ Playshops (not workshops – because artists get to play) are a special feature of the festival.

In recent years, there has been a bit of stink over the police presence at the festival. Dave believes it has in fact reduced attendance. However the Quincy community rallied to make sure the festival stayed in town and confronted the Sheriff’s office. The Office of the Sheriff issued a letter last November to High Sierra producers and attendees to ‘let all of you know that you are welcome in Quincy and we will treat you with respect as guests of our community.’ Dave believes there will be some ‘major changes’ in the police attitude this year.

‘What is it about High Sierra that is so wonderful? High Sierra gives each person a true feeling of personal freedom. What better way to spend Independence Day weekend than to celebrate our freedom,’ wrote Jambase.com in 2003.
I intend to find out. Dave, we’ll see you at The Slip. highsierramusic.com