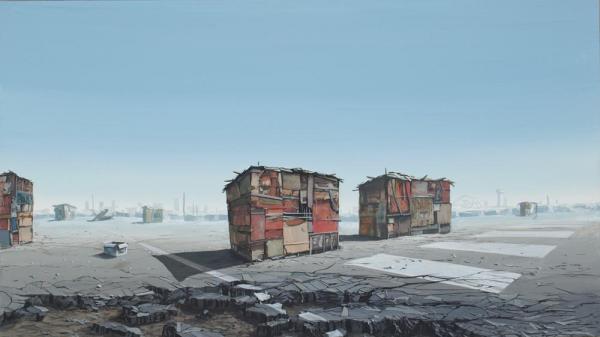 It’s more than an exhibit. It’s the question of our times. A new exhibit at the Sheppard Fine Arts Gallery, starkly entitled ‘Post-Petroleum,’ explores the ramifications of the automobile-scaled, sprawling spaces that make up the edge towns and suburban rings of American cities in an age when the very foundation of this way of life – inexpensive gasoline – has been severely undermined. The artwork, which includes a variety of media such as painting, video and sculpture, investigates these types of spaces as they exist today, as well as also suggests how our future society will be forced to navigate and live in these sprawling spaces with considerably limited access to fossil fuels.

Sheppard Gallery invited artist Christine Pinney Karkow to create the theme and curate the show, which runs through July 31. On the last day starting at 5:30 p.m., Karkow will share her thoughts about the show, walking around the gallery and discussing each piece.

Karkow has posted the exhibit at cpkarkow.com/post_petroleum and is also inviting people to post their own responses (the sky’s the limit) to the theme in an ‘online exhibit’ that will be ongoing and most likely national in scope.

‘In this way, the show can live on,’ Karkow said. ‘If anything is going to help us stay connected when we can’t physically get to places, it is going to be the internet.’ She plans to post an interview that she conducted with a Sparks city planner about urban planning in the area.

Karkow took a moment with Moonshine Ink to discuss the exhibit.

Moonshine Ink: What kind of art do you do?
Christine Karkow: It actually ties into the show quite a bit. I’ve always been concerned and/or sensitive about the environment I live in, what defines it, and how I’m defined by it. This has informed my work for years and of course the work has evolved and changed. I’ve lived in a lot of different places and I’m always very much influenced by the place where I live.

To be more specific, I do a lot of digital work – digital prints – I alter them digitally, then print them out and a lot of times draw or paint on them. I guess you could call me a mixed-media artist.

MI: What was the inspiration for the Post-Petroleum theme?
CK: First of all, I have to give thanks to Marji (Marjorie Vecchio, Sheppard Gallery Director) for letting me curate the show and letting me do what I wanted. She worked pretty hard to make the whole thing happen. She had to do the hard stuff; I got to do the fun stuff.

Marji and I just sat down one night and figured out the theme, and then decided to put out a call to artists and see what we got. This theme – the horizontal Bobinsky development that America has been creating for the last 50 to 70 years – has always been something I felt was un-sustainable, that someday the proverbial ‘stuff’ was going to hit the fan and oil was not going to be available. Then, how would we exist in these places that we have built that are so large and superhuman in scale?

Now that is actually starting to happen, I wanted to see what kind of response I would get if I put out the question, ‘What do you think about the landscape you live in?’ And that’s what we did. We got quite an amazing response. I think there are a lot of artists out there who are working with these ideas and haven’t had a venue in which to show their work. We got submissions from all across the country.

MI: How did you recruit these artists?
CK: Basically via email. There are just so many people that have these tremendously large email lists. There’s really a trippy networking capacity of the internet. Marji has a huge email list and I have friends in L.A. who got the notice and sent it to everyone they know. Fran Morrow at the Nevada Arts Council is really good about forwarding anything she gets, to massive amounts of people. And so it just networked all across the country. We didn’t pay for any ads! Usually you would have to advertise in art journals and publications, but we didn’t have to do that.

MI: How long was the call out there?
CK: Just a month. It’s a great testimony to the powers of the internet. I was happily surprised.

MI: In one piece from the exhibit, an image by Jeff Gillette, entitled LAX, we see ramshackle sheds or hovels sitting on a L.A. runway – what does this piece describe to you?
CK: Well, I particularly like this piece…He has two other paintings in the show, depicting freeway overpasses falling down in ruin, overgrown – the ruins of Babylon, that kind of thing – envisioning a time when these huge constructions that we built for auto travel are no longer being used.

What’s particularly interesting about the LAX piece is that it’s showing people living in these hovels, which underscores the growing inequity in economic opportunity in the world. The amount of people living in abject poverty and shantytowns like this – although these are actually cleaner and more luxurious – is skyrocketing. I don’t know if this was the artist’s intent, but what I got from it is that it highlights the fact that hand in hand with environmental degradation comes degradation of social structures, with implications that are very grave. We, as an entire nation, need to take heed of that.