Home Sections Arts & Culture Playing Not for, but with, the Crowd 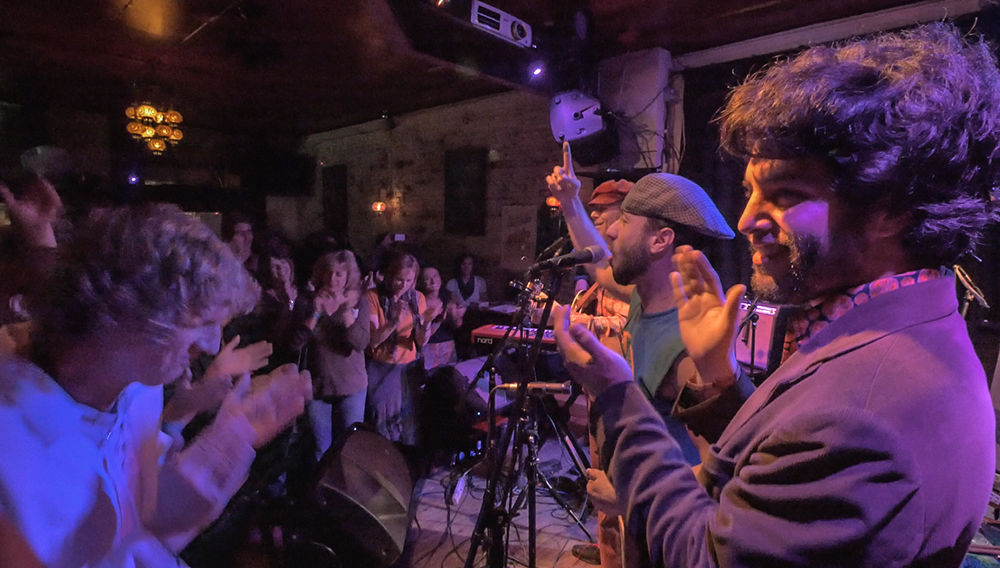 “I’m going to see a show” would be the last phrase I’d use to describe a night with The California Honeydrops. When you step into a venue with this band, just seeing isn’t an option. You can’t help but immediately take part in the experience.

An explosively diverse Bay Area R&B group, with one of the richest musical and instrumental backgrounds of all, The Honeydrops are helping to remove the audience/performer separation by stepping off the stage and playing not for, but with the crowd. Everything from putting new sounds in the subways and streets of Oakland to opeBy ning sold-out arenas for Bonnie Raitt, The Honeydrops are bringing back the concept of integrative music culture by simply having, and being, a good time.

Moonshine Ink had the chance to talk with with Ben Malament, co-founder/percussionist for The Honeydrops, to get an inside scoop on how exactly their unique sound and performance style came to be.

What’s the inspiration for getting into the crowd so much?

The people feed the music just as much as the music feeds the people. It makes you play different; it makes the music mean something else. It’s just life happening, it’s an event, when you’re moving, you’re sweating, you’re closing your eyes, you feel the drum next to your face, you get the horn in your stomach. To me, that’s just what music is.
When I went to Africa and Brazil I saw how music was just a part of life there. You play music and you dance, there’s no difference. And today, in music, when the bands are put on a stage almost like on these pedestals, it just feels weird sometimes. So for us, it really feels good and natural just to be down with the people.

Your music has been likened to that of a Delta R&B sound; have you spent some time in New Orleans or the South? Where did it start?

One of the coolest things about the band is that we all come from different places, and throughout the band’s history it’s been such a mix of backgrounds. I would say, Lech [Wierzynski] and I have the most in common. When we started the band we liked so many different sounds, from Caribbean to New Orleans and American Blues. Though we both got introduced to it in different ways.

Lech’s father was really into old Louis Armstrong, and Lech took jazz pretty seriously at a young age. My father was a piano player playing R&B and jazz in the LA scene. In college, Lech got hip to other stuff, receiving an ethnomusicologydegree in early African-American music.

That’s where the name comes from: California Honeydrops is based off of a stringband/jugband from the 20th century called the Tennessee Chocolate Drops.

Then Johnny Bones came along as sort of like this Jelly Roll Morton fanatic. Then Lorenzo [Loera] came in with the late ’70s R&B/gospel influence.

We all had such different musical love and passion going on. It’s endless, so many styles, we just try to do it all justice and play what we love.

Coming from a time when you would play in the subway stations of Oakland, what’s the feeling of going from impromptu and intimate shows to these bigger, sold-out venues?

That’s been one of the biggest challenges for the band as we’ve grown, and I think doing two sold-out nights at the Fillmore for our CD release felt really good, as we even opened for ourselves as a jugband for one of the nights.

We try to keep it as intimate as we can in these venues. But that’s why we just did this DownHome Tour; with an annual trip playing these smaller places, it’s fun for us, it’s fun for the fans, and it keeps us alive. It really keeps our music and our energy up to play small shows.

How is your sound evolving?

“The River’s Invitation” album is a pretty good permutation of what the sound has become, and on this next album we’re trying to go even further back into more of an acoustic roots sound and blending it with more modern production.
Don’t miss The California Honeydrops playing at this summer’s High Sierra Music Festival from June 30 to July 3 in Quincy, Calif.

Playing Not for, but with, the Crowd
Community / Education / Sports & Outdoors

Playing Not for, but with, the Crowd