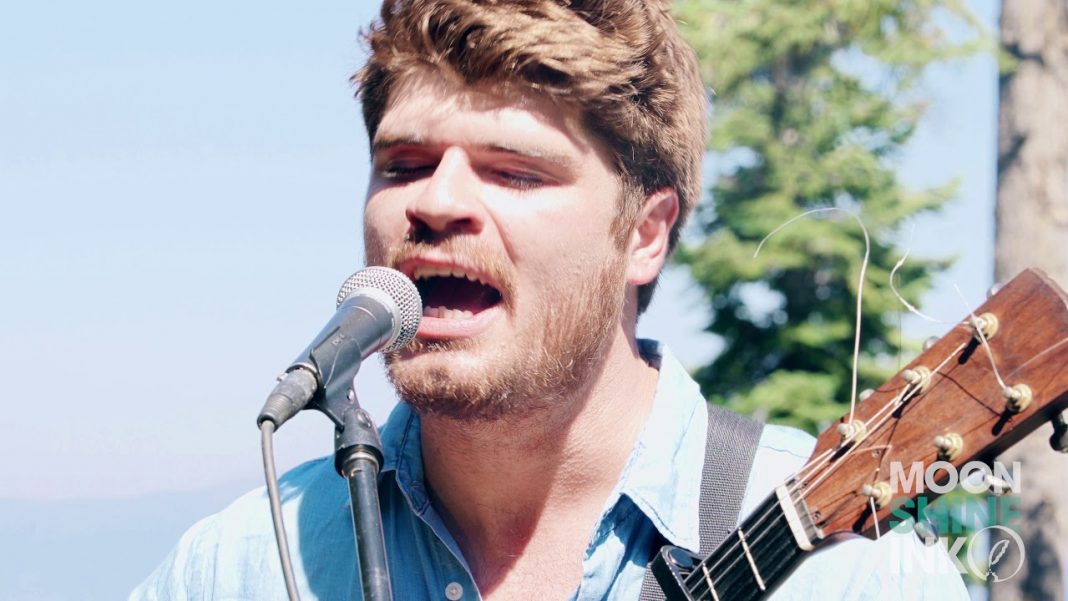 In August, I had the pleasure of sitting in a shady backyard under towering pines at a Tahoe Vista home overlooking the lake. I listened to four brothers tell the story of their lives together: traveling for what feels like four days every three days, long nights on the road, and inside jokes revolving around an old plastic buoy marker with a “smile” who lives in their touring van.

No, Marty O’Reilly and the Old Soul Orchestra (Chris Lynch on fiddle, Ben Berry on upright base, and Matt Goff on drums and percussion), are not biological brothers, but they may as well be. Their folk-inspired indie rock is moving to the soul, and tells a story of their time together so intricately woven between their relationship with music and their friendship as band-mates that it’s hard to tell which comes first.

As a teaser for the upcoming Lost Sierra Hoedown, the band stopped by Tahoe for a mini house-concert, a Tiny Porch filming, and an interview.

The evolution of your music over time doesn’t say “this next [sound] has to go here … ”  It’s a very natural evolution of you as people and musicians. Have you consciously thought to yourself that you want to be very real and authentic?

MARTY: The most commonly used word by us in interviews is authenticity. With the last album there was a lot of thought. That being said, it wasn’t forced, there was just this natural thing we all knew we wanted to do, and we were expressing something that was already unspoken between each other musically.

BEN: there is a point where authentic musical expression isn’t necessarily the most natural thing. It sometimes takes intentionality to find that thing that is authentic, so during that process there is … some discrimination that goes into weeding through ideas.

Does that add a pressure to your lives, knowing that you have to go somewhere with your music?

MATT: In a fantasy world, we could just create the music we want and make albums and … we could keep writing music forever and it would be so much fun. If there’s any pressure it’s the pressure to stay on the road to survive, because it’s a business.

MARTY: On the one hand there are those pressures, for business reasons and [because] you get tired of playing older things. But if you write music from that place, you’re screwed … so right now what I’m trying to do is stay focused and continue to make sure that I’m doing it for the fun of it — to continue to make writing a joyful experience.

How does the music drive you to move forward?

CHRIS: There’s always been this deep genuine excitement around the music we’re creating, and particularly Marty’s songwriting. I’m excited [for] the next batch of songs, which we’ll help blossom and take them further and arrange them. It’s always like the next chapter in the book — what’s going to happen next?

BEN: There’s this sense to me that creating music that I authentically enjoy has some inherent value in it and has me intrinsically wanting to invest my time and energy into it. I think that having music that has this sense of intrinsic worth drives me.

MATT: I kinda feel like this band and our music is this kid we’re raising (laughs). It’s important to people, and it’s super important to me. I feel a lot of protectiveness over what we’re doing and keeping it alive and keeping it healthy. I also feel super excited in wondering where our music is going to go and what it’s going to turn into because it changes a lot …

Speaking of the growth of your music … your new album has this dreamy sort of folk-rock feel to it which is very different from your previous music. Can you elaborate?

MARTY: The first album is much more about being influenced by our heroes and recreating that from the folk and blues world … this album is trying to not do that. This is all angsty sweaty electric craziness (laughs) … at the end of the day we were trying to push back on reiterating the music we love and trying to focus on what we’re feeling.

It comes out in very literal ways in the music too. Like in the first album, it’s all chord shapes that are pretty standard ones everyone uses …  the guitar work on the newer album is building my own chords, finding notes and constructing them. Not taking something pre-created and working with those existing tools but creating your own tools. And I think that’s why it’s so different.

CHRIS: When I started it was literally just a microphone on a fiddle. It was very raw, and the compositions were much simpler. As time went on I was adding pedals and trying to create miniature orchestras … to make one violin do more than it can with just one microphone on it. The album took that to another level and we got to experiment with synthesizers and more string arrangements, layering violins.

You selected Dreamcatcher to play for the Tiny Porch.  What is it about and why did you choose this song?

MARTY: I think we’ve learned it’s important to have the song choice meet the circumstances, and to be honest there’s not a lot of our material that’s very sun-shiny. So we chose this song because it’s simple, easygoing; it makes sense on a sunny porch.

It’s intrinsic that there would be a variety of types of songs you play, so why is this one song the sunny song?

MARTY: This is a lot about what I’m thinking about right now too. A lot of the stuff is dark because I write music to help deal with things. I’ve been thinking about the other reasons people make music. I even made a Facebook post saying: ‘why do you write music?’ And everyone’s like: ‘for fun?’

I wrote that song years ago, and I had just fallen in love with someone and I was feeling pretty high about it. I was sitting on a patio with my banjo and there were potted plants around me and they had these little tags. There was one that said: pink winter jasmine. It’s funny because that all sounds so obvious. When you get your head so buried in the complex world of creating music, it’s easy to forget simple things about it. Right now I’m thinking about taking a step back and remembering the simple things I might not have focused on enough recently.

You’re gearing up to play at Lost Sierra Hoedown Sept. 20. Tell us a little bit about the hoedown …

MARTY: The hoedown is the kind of festival where we generally spend the rest of the year trying to look people in the eyes and convince them to go.

ALL: It really is. (laughs)

MARTY: There’s so much about being a musician that requires you to promote [what] you’re doing … but the way that we promote this is for our own personal reasons. To try to explain to people that they will have a really good time when they go. There’s only two festivals we feel that way about, so that just says that we love this festival, really care about it, and it’s one of the things we look forward to the most throughout the year.

What drives you on those days when you really don’t want to keep going?

ALL: Natasha, our tour manager drives us. (All four dissolve into laughter, making a few inside jokes: ‘we do it for the fame! We do it so we don’t get slapped!’)

MATT: Real talk, there’s definitely moments where there’s just this deep misery (all laugh) that you have no choice, but to do that day. You’re waking up and you’re like ‘I don’t want to drive to Ohio!’ (laughter)

BEN: And it’s also not that safe! Because you only slept for four hours …

MATT: … it’s easy to complain about that as a musician, but the reality is that most people do that every day, when their alarm goes off. I think that we have that feeling way less than most people do, and the highs are so high. The good times are so awesome, and the actual playing of the music is super rejuvenating. Playing a show is not tiring so much as it is refilling the battery.

Do you love music?

MARTY: (solemnly) I used to (they explode into laughter). It’s funny because playing music changes the way you listen to music. In a way that means losing something that was really great about it, but part of the reason why is there’s something about making the music that you want to hear that is next level. It makes just listening pale in comparison. It’s kind of like watching the magic trick that’s already been revealed. If there isn’t something about it that you don’t quite understand, then you get kind of bored. So that makes us listen to increasingly nerdy music.

BEN: I think for me there’s a lot more synthesis of what I’m listening to. Many times music still really hits me in a certain spot, and at the same time there’s this understanding of why things are hitting me a certain way. I’m certainly still feeling music and analyzing and picking it apart at the same time.

What is your relationship to each other?

MATT: Platonic polyamorous boyfriend quartet. We do everything but touch each other (laughter).