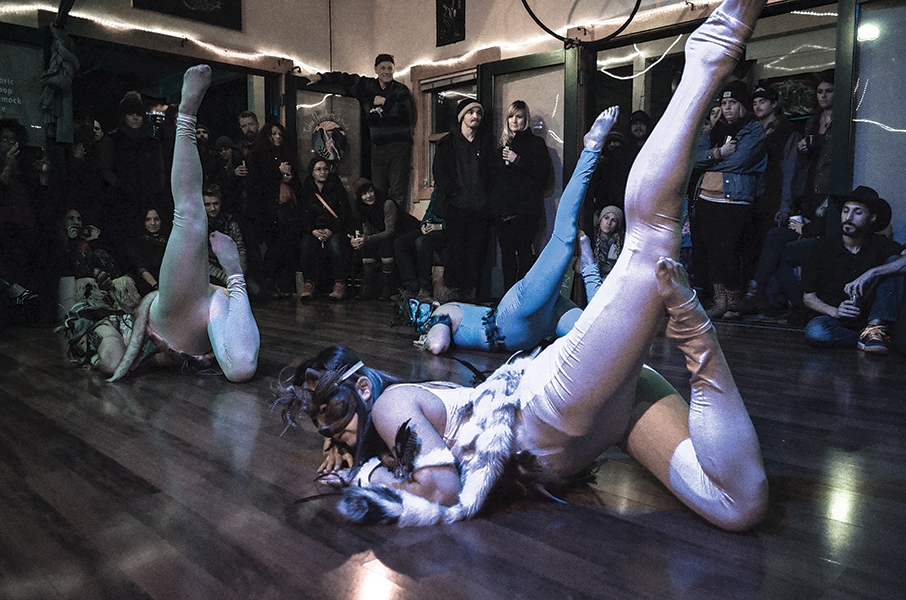 A passion project 10 years in the making, The Mountains are Pretty is set to debut March 2 with a live, six-person string band and 22 performers taking the stage at Tahoe City’s Tahoe Art Haus. In a typically athlete-driven area, writer and visionary Kurt Beckering and performer/Tahoe Flow Arts owner Kelly Smiley are on a mission to cultivate the performing arts, bringing this creative and vibrant folk opera to our community.

An original production set in the old west, The Mountains are Pretty is about an “average Joe” miner. He lives a mundane lifestyle until he ends up in a forest, and at the mercy of immortals. Insert mythical characters, adventure, aerial dancing, and a live, five-piece instrumental and one-singer string band. Despite the flair, the characters are still meant to be relatable and help people reflect on how the decisions they make will change the course of their own lives and the lives of the people around them. However, book a babysitter because the production is geared toward adults.

The play is driven by the musical score, which took almost five years to write, develop, and record. Kurt’s roots are bluegrass and he wanted to create a folk opera that illuminates the beauty of a string band. In doing so, he became the creator of a production that’s completely locally born.

“Everyone that’s involved is trying to see more performing arts in our community, so it’s great to see how people have come together to make that happen,” said Kelly.

The proceeds for these two shows will be donated directly to the purchasing of sound and lighting gear for this and future productions, allowing for continued homegrown works of performance art.

Similarly, Kelly founded Tahoe Flow Arts six years ago, hoping to foster a lasting creative presence in the community. The lead performers and aerial dancers in The Mountains are Pretty are a part of the Tahoe Flow Arts practice. Costume designer and Truckee local, Abi Collomb Gregor, helped the mythical world come to life with masks, textures, and vibrant colors.

During the two-hour, two-act production, the four main characters have their own choreographed scenes including floor dances and aerial arts, which features hoops, silks, and straps. Lead choreographer Leah Pivirotto has practiced classical ballet her whole life and brings her immense knowledge, passion, and creativity to the project.

At the end of the day, Kelly and Kurt hope the production will leave the audience with questions of morals, community, and the human existence, but also intrigued, delighted, and inspired to create more live performances.

INFO: Two performances only: March 2 at 8 p.m. and March 3 at 2 p.m. Tickets on sale now, $30, space is limited; tahoearthauscinema.com