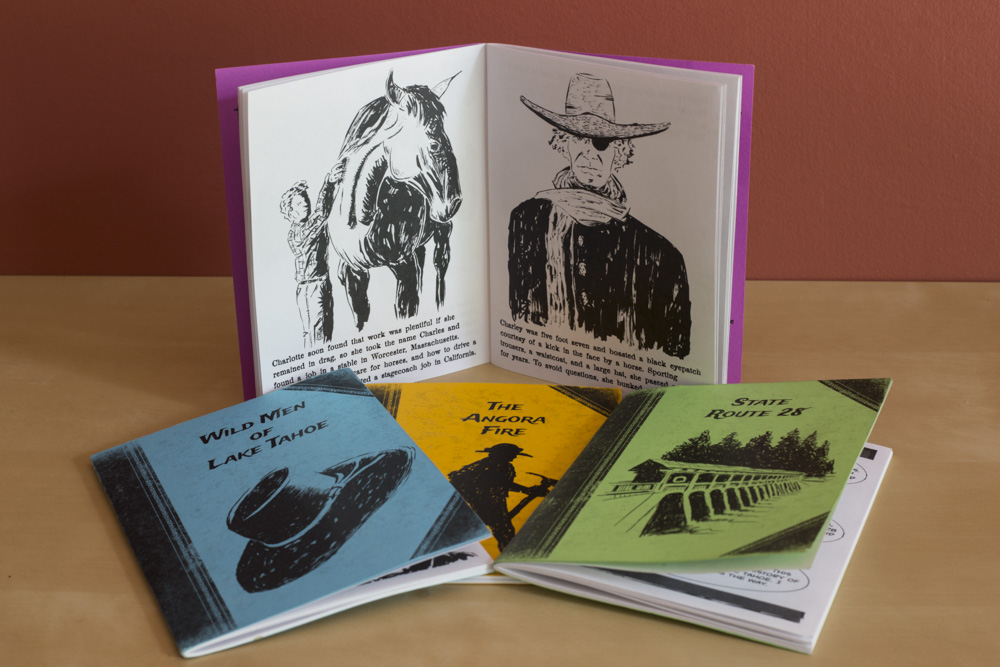 Ever wondered about the Angora Fire or the Hermit of Emerald Bay? Tahoe History Comix, sold in four-packs and individually, present historic topics in short, easy-to-read formats with detailed illustrations. The coolest part of these comics is they were written by Kim Wyatt and illustrated by Jared Manninen of the Lake Tahoe Society for Storytelling & Enlightenment, which keeps history alive through storytelling. Released in 2009 by South Lake’s Bona Fide Books (of which Wyatt is a publisher), the first round of comics includes five volumes, with three more in progress.

My favorite comic, Trailblazing Women, taught me about Charley Parkhurst. A runaway from a Vermont orphanage in the 1800s, she dressed in drag for her whole life to avoid the authorities and find work, which was easier for a man. Known as Six-Horse Charley or One-Eyed Charley after an unfortunate incident with a horse hoof to the face, she bunked with her horses, transported people and freight across the country, and was only discovered to be a woman after her death in 1879.

Another trailblazer was Dat So La Lee, the famous Washoe basket weaver. A local shopkeeper sold her baskets in exchange for giving Lee and her husband a house. Too bad landlords don’t do this anymore, or I’d definitely take up basket weaving. Considered art and never used functionally, her baskets are still displayed in the Gatekeeper’s Museum in Tahoe City, the Nevada State Museum in Carson City, and the Smithsonian in Washington, D.C.

The final trailblazer was Lora Josephine Moore Knight, called the Viking Glam on Emerald Bay after buying 239 acres for her home, Vikingsholm, for $250,000. Today, that amount could buy a small, one-bedroom apartment in San Francisco. In New York City you’d probably get a shower in your kitchen, which would never fly with the Viking Glam. She even toured Scandinavia to find the perfect design and commissioned architect Lennart Palme to construct the castle-like structure in 1929, which was finished in six months.

From Wild Men of Tahoe I learned about Captain Dick, the Hermit of Emerald Bay. He regularly rowed his dingy to Tahoe City to engage in the nightlife at the old Tahoe House, but one fateful night in 1870 the dingy capsized. Legends say he emptied the boat using his whiskey jug. After dragging the boat home 10 miles, his toes were frostbitten. He amputated them with a carving knife, kept them in a box, and regularly showed them off, saying “Them’s my toes.” He also fashioned a tomb, where the Vikingsholm Tea House now sits, that he planned to crawl into when his time came, though sadly he was forever lost in a shipwreck. His namesake is all over Tahoe, from Dick’s Lake to Dick’s Peak in Desolation Wilderness, to Dick’s Pass on the Tahoe Rim and Pacific Crest trails. For a hermit, Dick was really popular.

For any non-Tahoe history buffs, these comics will give you a unique perspective of our local area. I personally have a list of places to explore after reading them, and I can’t wait to follow in the footsteps of Tahoe’s trailblazing women…that is, if I can build a castle for $250,000 or pay my rent in baskets.