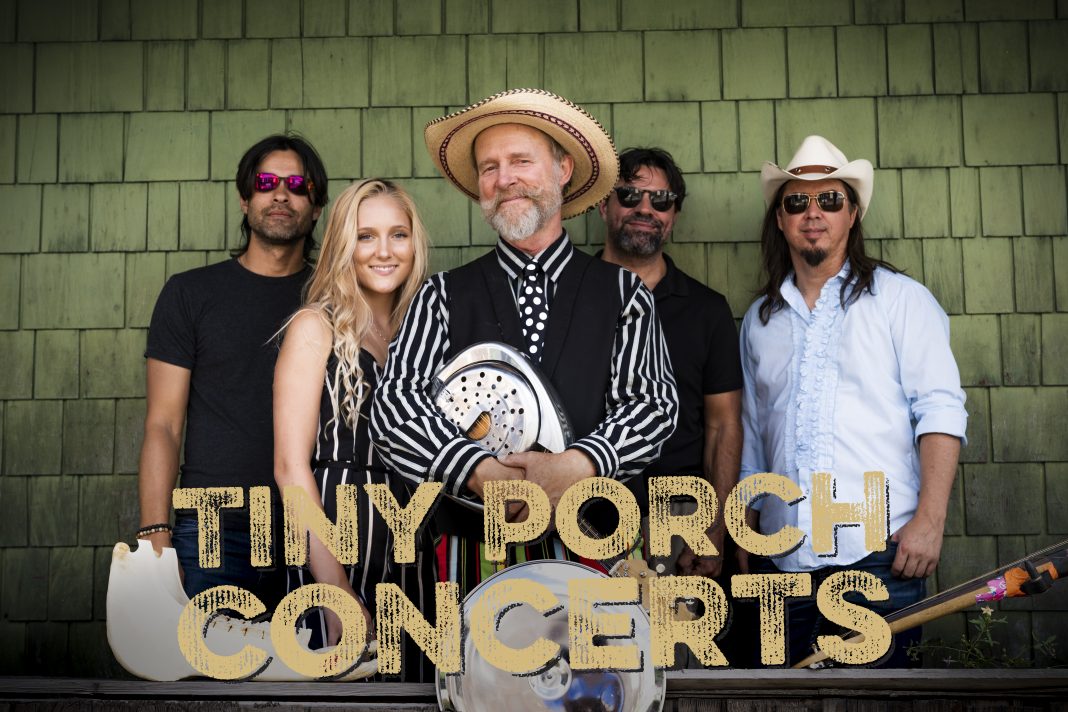 The week prior to joining us on our tiny porch, Joe Craven and his daughter Hattie woke up on the banks of the Salmon River in Idaho. They were working for Middle Fork River Expeditions, a rafting company that hires musicians to play for rafters around the fire each night. This was Joe’s second year with the expedition, and this time he decided to switch it up. Why have a bunch of people sitting around and staring at you, when they could play with you? Joe and Hattie brought along plastic ukuleles that served as both instrument and paddle, and each night had the campers join in the vibrant musical festivities. That pretty much sums up Joe Craven: educator, musician, improvisor, and all-around good time.

Over the course of our time together, we listened to them play two original songs, “Better Get Off It” and “Storms A Coming,” and directed the crew in a B-roll skit inspired by Charlie Chaplin. Better yet, we witnessed Joe play music on a bedpan, a pelvic bone, and a tiny ukulele. But even when not playing on pieces of skeleton, Joe’s energy commands the stage. Guitarist Bruce MacMillan, bassist Jonathan Stoyanoff, drummer Barry Eldridge, and singer Hattie joined Joe on the banks of the Truckee River for our 12th Tiny Porch concert. Wearing an honest smile, a striped shirt, and a polka dot tie, he and his band don’t take each other too seriously. Don’t let the improvisational and quirky style lead you astray, however, Joe Craven & The Sometimers sure know how to put on a solid and musically outstanding show.

On your website it says: “Musician, educator, emcee, visual artist, actor, former muse-ologist, ambassador of artful living, fashion-insultant.” How did you come to be all those roles and do you have a favorite?

I’ve always been interested in the arts, even as a kid. I was really interested in acting — I loved doing skits at school — and I loved Halloween, and I loved all these opportunities where I could just kind of express myself in ways where I wasn’t normally “me,” whatever that is. Later on, I had an epiphany while listening to a Jimi Hendrix record. I grew up in the Southeast in Georgia and the Carolinas. I was playing little league football and this friend of mine, his brother was playing Jimi Hendrix on this beautiful fall Saturday afternoon and it just all hit me right. I went home and asked my dad for an electric guitar and an amp the size of mom’s refrigerator. He bought me the guitar, not the amp, and that kind of started my journey. I started as a rocker.

A lot of people these days think of me as a mandolin/fiddle player, but I’m also a percussionist. And the mandolin thing was really an impulse buy at a music store. I was playing in a rock band with a fellow who went on to make a big name for himself in the indie-rock, college radio world called REM. Peter Buck and I were good high school buds and played rock together. So after high school he went off to keep doing what we were doing then I bought a mandolin and that took me on a 180-degree turn into things like Americana and bluegrass and all that stuff.

I’m self-taught with just about everything I’ve done. And so, I really got interested in my college years with the idea of vernacular learning, the idea of learning without literacy being a prerequisite. For example, learning music the same way we all learned how to talk: observation and imitation. An informal pedagogy. I’m still pretty uneducated, in the formal sense, in music, but I’ve got a great ear and I can just get up and play with people I’ve never met and whose music I’ve never heard. And that just got me really interested in wanting to teach. I started doing school outreach. I had no formal training in teaching, I just sort of found my path, informally, on my own, and have just fallen into really great ways.

It sounds like you’re a Renaissance man, which is kind of a lost art these days.

That’s why the description on my website ends with being an ambassador of artful living. Because that kind of brings it all together. What I’m really interested in is empowerment. Art helps you become more of what you already are. It’s not the idea that art is this illusive thing you’re trying to reach, it’s just simply bringing your inside out. Everybody has a story. You have a completely unique story. And that alone means that your story is valuable. And so, I wanna know people’s stories. I like to help people tell their story by, first of all, validating them and giving them permission, and then helping them with skillset and ideas to put it to work and put it on the table. I’ve worked with people who are challenged with various things. Behavioral — I’ve worked with kids in juvy, I’ve worked in the prison system, and with lifers. For instance, working with lifers in the prisons, people who are incarcerated and are never going to get out — they won’t, but their stories can, their art can. I don’t do that as much as I used to, a lot of the funding has dried up. It’s incredibly powerful work for me, but it’s also exhausting.

How has your role as an educator changed the way you see music?

People think of talent as a prerequisite that you need to have before you can actually do anything. The problem with talent, is that it gets into the haves and the have-nots, and I don’t believe any of that. I believe that everybody has the ability to make music, for example. But I’m not there to say you should make music, that’s not the deal. That needs to be a choice. But I want somebody to make the choice to not make music because that’s not the medium that lights their fire. I want them to say, I choose not to do it because I don’t want to, not because I can’t.

I know your band recently made an album inspired by some of Jerry Garcia’s songs — someone you played with in a quartet — who are some of your musical idols?

Some of the most influential people for me are people I’ve been very blessed to play music with. I’ve become a big fan, being a mandolin player, of David Grisman, who’s a very well-known mandolinist. And I idolized him because his music gave me a direction of where to go when I first started playing. Then I wound up joining his band and played with him for 17 years. Through that, I ended up meeting and playing with Jerry Garcia. Those are just some examples of some people who have certainly been influential to my playing … [I did] not just learn about their music, but learned about them too, their humanity, their genius, their struggles, their ups and downs. That’s helped me be more forgiving of myself.

When Jerry died — which was about a year after we quit playing with him because his health really started going down — when he died, a lot of people said I should work that angle that I’ve played with him, and play more Dead music, and I just didn’t do that. I kind of wanted to be more myself. All these years have gone by and I thought, “You know what, it’s time now. I feel like enough water has gone down the river.” So we did this tribute to Jerry, but I wanted to reimagine the music. So all the guys in The Sometimers, including my daughter who has now become a self-proclaimed Deadhead herself, all stepped up. It was such a great collaborative project, so when you hear it, Deadheads who know the music will go, “Oh my god, that’s that,” it’s going to be that kind of thing. I hope they think, “Well that’s really different, but it’s really cool.” And for people who don’t really relate to the Dead, they’ll hopefully think, “Well I’m not really into the Dead but I like this.” It’s called The Garcia Songbook. We cherry-picked our favorite things that Jerry wrote and reimagined them in all these wild configurations. It’s a nice way to shake hands with and pay tribute to somebody I am really very grateful for.

What do you try to convey with your music and bring to the stage? What do you want to leave the audience with?

Feeling positive about life. In other words, to feel good. To feel better than when they came. But also, to have the music inspire them to be creative themselves.

Check out Joe Craven & The Sometimers’ newest album The Garcia Songbook in which they reimagine some of Jerry’s greatest music and lyrics.