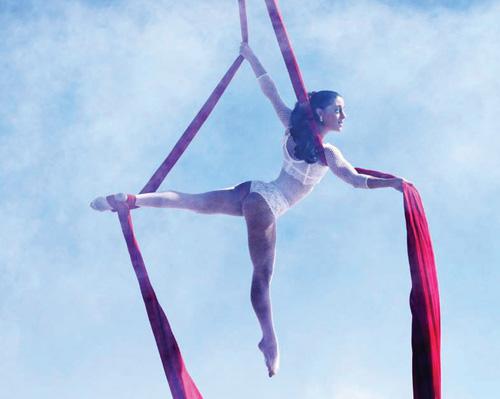 For a man who has dazzled international audiences in Cirque de Soleil, provided movie director Sam Raimi with the inspiration (and body) for Spiderman, and trained acrobats in rural China, settling down in Reno seems unworldly and rather unlikely.

But Tahoe ‘calls’ to Christopher Childers. ‘This place makes me feel grounded, centered, and safe.’
A choreographer and dancer who was discovered by Paula Abdul on stage at Harvey’s Tahoe in 1985, Christopher has a long list of credits – a dancer for Madonna, Prince, and Michael Jackson; a choreographer for Cirque du Soleil; and a performer with the legendary choreographer Twyla Tharp.

Growing up in the Bay area, Christopher was introduced to performing and globe-trotting early on by his mother who had him dancing when he was three. His mother was an avid dancer who left home when she was 15 years old to dance ballet in New York City. Later she joined the U.S.O. and headed to Germany during Hitler’s reign; it was there that she met Christopher’s father, who was serving in the U.S. Air Force. At age 22, she was in the audience of the Nuremberg trials – certainly a chilling experience.

Christopher says there’s a difference in people who have seen death. He saw a certain ‘hardness’ in his mother and he experienced tragic deaths in his lifetime, ‘It’s not exactly a blessing, but I feel fortunate because it makes me think about my choices and not take anything for granted.’

Embracing the delicate balance of life, he likes to be ‘teetering on the brink of order and chaos,’ in his creative work. ‘I always go to the edge of each and pull from each one.’

Hand in hand with his bilateral explorations, Christopher never hesitates to dive in whatever waters come his way. He’s left gigs most people would kill for and he’s dropped everything to jump on a plane and start a new project simply for the experience.

‘My life has always been about trusting the flow of things,’ he said. Though he admits he had ‘no idea it would go so fast.’
He started Choozi, a ‘smart, forward-thinking, oftentimes bawdy, slightly naughty’ production company, with his sister Suzanne (Soozi) in 2004. They landed a Chinese New Year performance at the Grand Sierra in Reno, which inspired friend and fellow choreographer Shari Woodsgreen to make a daring suggestion – what about a performance at Sand Harbor on the Shakespeare Festival stage? The muses were roused!

And so ‘A Midsummer Night-MARE’ was born, a story about a young girl and her extended night of dreams and nightmares, coming for special two-day show on August 24 and 25. A cast of some 30 artists includes world-class acrobats, Broadway dancers, live musicians, stilt-walkers, martial artists, and aerialists (see photos to explore some highlights of the cast). Truckee’s own InnerRhythms Dance Theatre will join the stage in this wild and ethereal production. Soozi is busy sewing the elaborate costumes, working ‘until her hands bleed,’ Christopher said. (Check out choozientertainment.com to see a gallery of her breathtaking and lavish work.)

How does one round up performers of such caliber for a two-night show? Through his varicolored career, Christopher has amassed a pool of friends who share the same appetite to engage a creative imagination and showcase the talents of the human body.

Elena Lev, a Russian-born gymnast whose prowess with a hula hoop will leave your jaw on the floor, has worked with Christopher on other shows and will be joining the Night-MARE. ‘I’ve known Chris for many years from Cirque du Soleil, and I love doing shows with him – it is always a great and fun experiencem,’ she said.

True to form, Christopher will be experimenting. For example, in one segment, he plans to combine body percussion, belly dancing, and hip hop dancing. ‘It should be an interesting realm,’ he said.

The ideas keep on flowing, most of the artists arrive on August 19, and the show isn’t completely set until opening day, he said. ‘The trick is keeping a tight rein, so the performance doesn’t lose focus.’

This is Christopher’s element as collaborating is his preferred M.O. He worked with director Sam Raimi for two years to develop the choreography of Spiderman in the recent series; at times he swung around on a rig in Raimi’s backyard. The graceful and sure flip of Spidey’s wrist as he shoots his webs is based on Christopher’s fluid movements.

He enjoys working with InnerRhythms, the local dance theatre run by Sheri Woodsgreen and Elizabeth Archer. ‘Sheri and Elizabeth have their vision in the right place and they have the passion, heart, and drive to make it happen,’ he said.

As he prepares for the Night-MARE Christopher simmers in inspiration ether with his mind wide open. He’s been listening to spooky horror movie soundtracks, such as ‘Carrie,’ ‘Dressed to Kill,’ and ‘Logan’s Run.’ (Co-team members nixed his idea of using pigs blood onstage.) As he lies waiting to go to sleep each night, dance sequences play out in his head; when he finally falls to sleep, ‘vivid, odd, wonderful dreams’ fill his psyche.

And when he’s done with A Midsummer Night-MARE, he’s heading to Burning Man, which he describes as the ‘purest, most heartfelt creative space I’ve ever seen.’