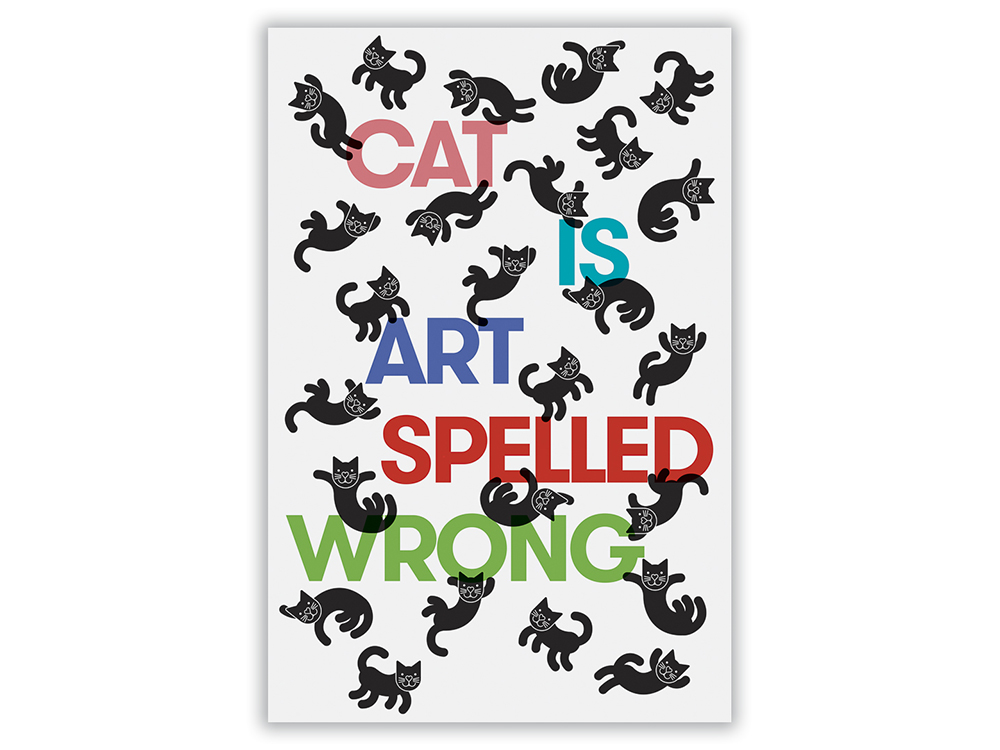 We are a culture obsessed … with cat videos. How many times have you caught yourself in a YouTube hole of surprised kittens and cats surfing on Roombas? If you have ever accidentally spent hours in front of the computer, possibly at your office job, clicking on cat links, then this book is for you. Cat is Art Spelled Wrong is published by Coffee House Press, a subset of the Walker Art Center in Minneapolis.

It is through a series of essays that this book explores the internet cat sensation: What we find cute and subsequently what we consider art. Generally, anything can be art, especially in an art setting.

Cat is Art Spelled Wrong touches on the temperaments of cats and their interactions with humans. There are a few essays of personal experience with cats; they are cute and terrible at the same time, they constantly want to be left alone, but then will crave and force your attention on them. You also have to be a “cat person” to really appreciate them. The personality of a cat and that of a creative type person is actually quite similar. Generally, creative people are both outgoing and introverted, just like cats. Perhaps this is why there are so many cats in classic literature and paintings.

In this book we learn all the cat culture facts. The first cat video was actually made by Thomas Edison in 1894. Look it up, “Boxing Cats.” There is even a cat video festival at The Walker. Yes, a festival of cat videos. What we consider personal YouTube-time becomes an event that brings people together. Of course there have been celebrity cats such as Grumpy Cat present at the festival.

A lot of our famous cat videos were never intended to become sensational. For example, “Henri, le Chat Noir” creator Will Braden was actually late on a film project and decided to make a video of his cat, Henry, in a film noir style. His procrastination paid off and after the first video — which really went out mostly to friends — the second helped the videos gain a following. Now Henry is famous and the best cynical cat on the internet. If you work hard enough, or rather don’t work at all, maybe your cat could be the next internet sensation.

Whatever the case, cat videos are art.

Erinna McCarthy grew up in Portland, Ore., and went to Japan before it was cool.

Interestingly enough, what originally drew McCarthy to Japan wasn’t the typical powdery pillow lines everyone talks about today. She grew up in a unique household, with two moms, and this made her sometimes feel like an outsider. It wasn’t until she saw a Japanese movie that glorified both gay and female relationships as well as the Japanese culture, that she decided she wanted to spend a year of her high school career in Japan.

And so McCarthy, a self-proclaimed 16-year-old gypsy chick, convinced her parents to send her to Tokyo for her sophomore year of high school. Fast forward and McCarthy, who calls Tahoe City home, traveled back to Japan, her first time since living there as a teen, in search of that oh-so-famous Ja-pow in January 2015. From that trip her book idea was born.

Speak Japanese and Sh*t, originally written as a gift for the friends she was traveling with on the 2015 trip, quickly morphed into a guidebook of epic proportions. It teaches you the stuff you can’t find anywhere else, written in a fun and conversational tone. “While we were in Japan I saw the things my friends struggled with, never having been there.” McCarthy said. “Like how to read stop signs, or use washing machines, or click the buttons on the toilet.”
The guide book covers everything from Japanese slang to city mascots, tourist attractions, and resort suggestions. It is a must-read for anyone making the ski pilgrimage to Japan.

McCarthy wants to go back again, but next time in the summer for a river trip. “There is so much snow, you have to imagine the rivers go crazy when it all melts,” McCarthy said.

Keep your eyes peeled for future guide books, but in the meantime don’t miss McCarthy’s book signing on Friday, Feb. 12 at 4 p.m. at Granite Chief in Truckee where copies of the book will be available for purchase, and light refreshments provided.

How to Watch Cat Videos While Skiing Pow in Japan
10:00 am

How to Watch Cat Videos While Skiing Pow in Japan
Community / Family / Food & Drink
12:00 am

How to Watch Cat Videos While Skiing Pow in Japan