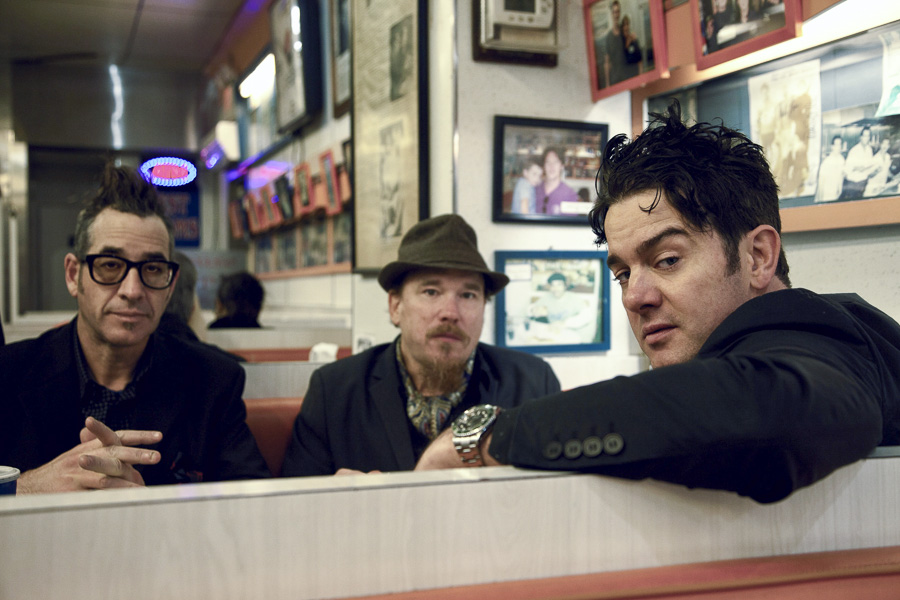 Garrett Dutton, the lead behind alternative hip hop band G. Love & Special Sauce, doesn’t really care what you call him. “Call me G. Love, or Garret, or G,” he said when I kicked off our interview with the ever promising “What is your name?” question.

After the clarification, I spoke with 45-year-old Philadelphia native Garret — that’s what his friends call him — about the band’s 25th anniversary tour, the reception of their music in mountain towns, what he likes about playing the Crystal Bay Casino, and the Super Bowl.

How has your sound evolved in the past 25 years?

I moved from Philadelphia to Boston in 1992 because you could be a street performer and have a license, as opposed to Philadelphia where it was technically illegal. I moved because I wanted to pursue my music and in order to do that I needed to have no distractions, so I moved away from my hometown. In December I met Jeff Clemens, my drummer, and we started the band as a two-piece, then we added Jimmy Jazz [Jim Prescott] on the upright bass. He got hired as an aspiring jazz musician, because most jazz musicians are pretty sophisticated, and my music is relatively primitive. Most of them [professional jazz musicians] didn’t really get our music, but Jimmy Jazz had a background in classic rock and jam music. And so we had a sound.

And nobody really had a sound like that at the time, correct?

Ya, no, I mean … We made demos and linked up with a producer out of Philadelphia, literally ten blocks from where I grew up. The guys took a trip out to LA to visit with labels. They came back and he said there’s a guy who is doing what we were doing — it was Beck. It was an interesting time because Beck was on the West Coast and doing something similar to what we were doing on the East Coast — a white boy rapping and playing guitar.

And at the same time, The Roots were hanging around the same studio as us trying to get a deal. They were pissed off because we got signed first. Anyhow, we got signed right away and I remember we were up in Boston and I remember thinking my whole world was about to change drastically. It was one of those golden years of your life, the energy and everything was just so euphoric. It was really cool. So that is kinda the emergence of the band.

Can you switch gears to the business side and explain how the industry has changed in the past 25 years?

We were signed as a developing act. This was when the labels, in the early 90s to 2001, peaked. For example, Nsync sold the most records ever, in the history of music — that is how many people were buying records. So the labels had a lot of money to experiment.

In 2001 Napster was huge and digital — which was called piracy — which we now call music sharing, started. The record companies had no answer for it, they were not prepared, and the bottom dropped out from under them. In October 2011 we got dropped by Sony because we never had a major hit. We made a lot of cool records, did a lot of touring, and had a good fan base, but we didn’t have a huge hit.

I noticed that on this tour there are a lot of mountain town stops — you’re going to Aspen, Salt Lake City, Keystone; you’re coming here. Is that a coincidence geographically or is it intentional?

We’ve always done well in the beach towns and the mountain towns, and a lot of extreme athletes have given our music a lot of love over the years.
In general ski towns and the beach towns love jam bands, rootsy music, and bluegrass, and also they like the hip hop. So I think a lot of people who go out and ski-bum-it-up and leave the East Coast to live that mountain lifestyle have always been like, “oh-ya, fuck-ya, bring a taste of the East Coast to the mountains.”

What do you like about playing in Crystal Bay?

We’ve pretty much played there every year and it is just a beautiful place to play. Casinos are a tricky thing for bands to play because they can be kinda lame. And I’m not just saying this, but the vibe at the casinos in Lake Tahoe, just because of the community, is never like you’re in a casino, it just feels like you’re in a venue. We’ve just been lucky enough to be on the menu.

Totally shifting gears, but I have to ask. You’re from Philly, assuming you’re an Eagles fan, how did you celebrate the Super Bowl victory?

It is funny because I am a huge Eagles fan, but I also live in Boston and I’m friends with Tom Brady and his crew, but I can’t root against the Eagles. I played Boston on Friday and I played Philadelphia on the Saturday before the Super Bowl. The Philadelphia show was like a pep rally for the Super Bowl. We played the “Fly Eagles Fly” fight song to start the show and throughout the show, right before the encore, the crowd is singing “Fly Eagles Fly.” It was a lot of fun; it was a great show.